PIC: Firefighters stand on a bridge that leads to Nisa as a wildfire rages near Vila Velha de Rodao, central Portugal. (AFP)

Out-of-control wildfires like the ones that brought destruction to southern Europe, North America and parts of South Africa in recent weeks will likely become more frequent as global temperatures soar under climate change, experts say.

More than 10,000 people had to flee raging fires in southern France this week, and several villages were evacuated in Portugal just weeks after another blaze killed more than 60 people there.

In South Africa in June, nine people died and some 10,000 people were evacuated from their homes as fires raged through the drought-stricken Western Cape region, while this month some 40,000 people have had to flee wildfires in western Canada, where officials declared a state of emergency.

In California, some 8,000 people were evacuated last week ahead of fires that razed vast swathes of forest.

The more the mercury climbs, the higher the risk for more, and more intense, wildfires.

Scientists say the average global temperature has risen by one degree Celsius (1.8 degrees Fahrenheit) since the Industrial Revolution, when mankind started emitting heat-trapping greenhouse gases from burning fossil fuels into the atmosphere.

Most of the world's nations agreed in Paris in 2015 to limit overall warming to 2 C.

But experts say this will not be enough, and severe heatwaves and drought will grow worse regardless.

And it is not just heat to blame for fires.

A recent study showed that extreme thunderstorms formed due to higher temperatures, and were the main driver for massive fires in Alaska and Canada in recent years. More storms mean more lighting to ignite fires. 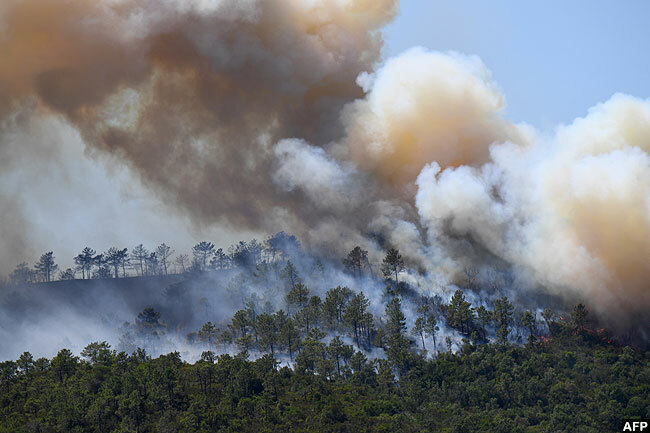 Are there more fires today?

According to Thomas Curt, a researcher at France's Irstea climate and agriculture research institute, big fires of over 100 hectares, and "megafires" over 1,000 hectares, have been "a growing problem worldwide and notably in Mediterranean Europe".

And NASA research shows that fires have increased in Canada and the American west, as well as in regions of China, India, Brazil and southern Africa.

According to NASA, "a warming and drying climate," was to blame.

"Climate change has increased fire risk in many regions," according to the space agency.

Globally, surface temperatures over land and sea were the second highest on record for January to May.

Italy, Portugal and most of France had winter rainfall 20-30 percent under the seasonal norm, according to French climatologist Michele Blanchard.

Almost three-quarters of Portugal, where 75,000 hectares of forest have burnt since January, has been battling a severe drought since June.

According to the WMO, more than a third of Portuguese weather stations measured temperatures over 40 degrees Celsius over a weekend in June when the fires began.

Scientists are loath to ascribe any particular drought, heatwave, or other weather event to climate change -- a phenomenon that can only be measured over decades, but note that these events took place within an overall warming trend. 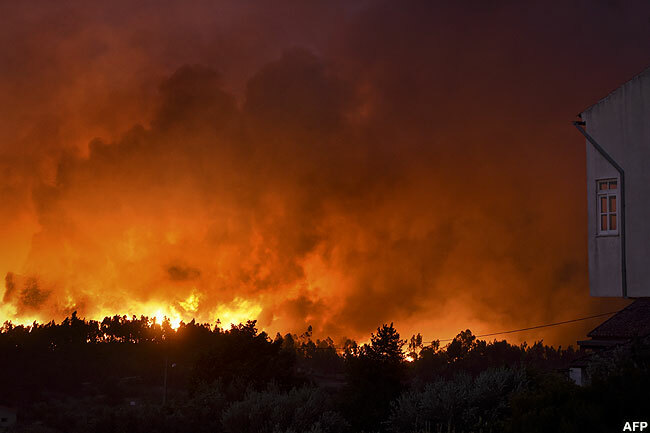 What about the future?

A 2016 study of the European Commission showed that the fire-prone surface area of southern Europe could double in the 21st century.

A study published in Nature Climate Change in June said three-quarters of the global population will be exposed to potentially deadly heatwaves by 2100 unless greenhouse gas emissions are curbed.

Even with aggressive cuts, it said, nearly half of the population will be exposed.

According to the authors of another study published by the same journal in May, fire is the most significant risk to forests, which cover about a third of global land surface.

And it was clear that "risks caused by fires... will increase in the context of climate change," they said -- citing devastating forest blazes in Canada and Russia in recent years.

Apart from long-term efforts to rein in global warming, some forest will have to be cut back, undergrowth cleared, and residential areas moved further from scrubland and forest borders, to reduce the risk to life and property.

"The focus... should shift from combating forest fires as they arise to preventing them from existing, through responsible long-term forest management," says green group WWF.