"After seeing the story in New Vision, I engaged my town clerk on how best we could help our neighbors."

"After seeing the story in New Vision, I engaged my town clerk on how best we could help our neighbors."

Katabi Town Council has received a donation of a garbage truck.

An annual review meeting earlier this month revealed that the town council is grappling with health facilities, coupled with a poor waste and disposal management system.

These were cited as some of the major hinderace to development of Katabi, which has just acquired town council status.

A story New Vision ran on that caught the attention of Entebbe mayor Vincent DePaul Kayanja and town clerk Charles Magumba. As a result they have donated a garbage truck to their neighbors in a brief ceremony Wednesday.

While handing over the truck at Entebbe Division A offices, Kayanja said the municipality he heads (Entebbe) and Katabi are close neighbors.

"After seeing the story in New Vision, I engaged my town clerk on how best we could help our neighbors," he said.

As a municipality, he added, they were not only concerned about the health problems of Katabi, but were also duty-bound to act since diseases arising out of poor health facilities can easily be spread to his city.

"In fact, most people working from Entebbe sleep in Katabi," said the Entebbe mayor. 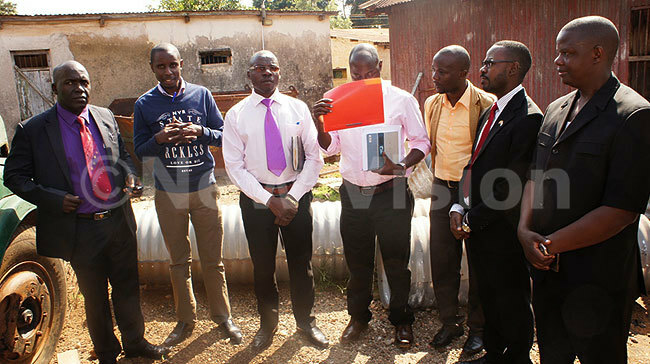 Officials from Entebbe municipality and Katabi Town Council during the handover of a garbage truck to the latter. (Credit: Julius Luwemba)

On his part, Katabi mayor Ronald Kalema thanked Entebbe municipality officials for what he termed as a "brotherhood" between the two local government authorities.

"Even though the truck needs some maintenance, I believe that's way cheaper than acquiring a new one which would have cost us over sh200m," he said.

Meanwhile, Katabi town clerk Henry Semakula thanked Entebbe municipality for allowing the new town council to use the municipalty dumping area located in Nkumba zone as a dumping site for waste and garbage.

The officials also applauded New Vision for what they termed as human-interest news reporting.