Mocking the United Nations is a popular event among students in various countries.

Mocking the United Nations is a popular event among students in various countries.

The mimicking of security personnel protecting the ‘presidents' also added pomp to the event.

This was last weekend, when 1,000 students from 25 schools from Wakiso, Mpigi and Kampala joined the St. Lawrence schools in a mock debate, re-creating a powerful scene of the United nations General Assembly.

Mocking of the UN assembly is a popular event among students in various countries. Students play the roles of foreign diplomats and participate in a simulated session to develop solutions to world problems. It is aimed at training students in civics, effective communication, globalisation and multilateral diplomacy.

Flags of various countries were flying high at London College of St. Lawrence. You would be pardoned to imagine that there was an official heads-of-state meeting taking place at the school premises.

The Speaker of the Parliament of Uganda Rebecca Kadaga, who was visiting the St. Lawrence schools and colleges for the first time, was the guest of honour. 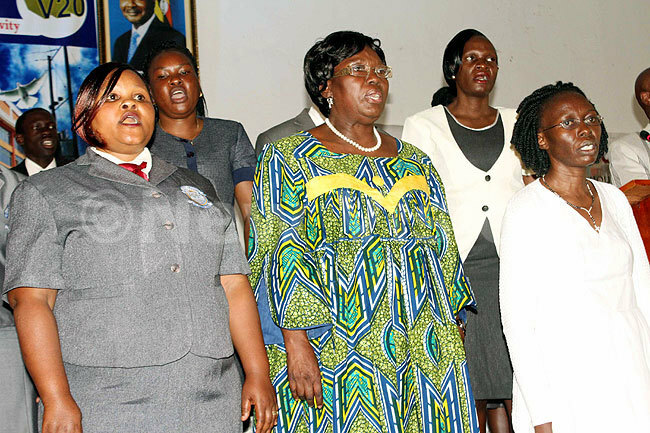 She lauded the founders of St. Lawrence schools and colleges, for the great vision and friendly programmes which have helped educate the nation's children.

She said there is need to encourage debates among schools because producing a wholly student needs one who has training in both co-curricular activities and academics.

"Debates  have changed from the old boring model of ‘proposers' versing ‘opposers' to students carrying out research on a given problem, and offering solutions like world leaders would have done," said Kadaga.

Kadaga also thanked the administration of the schools for being focused and ignoring the negative media which had characterized the education empire after the death the schools' founder Prof. Lawrence Mukiibi.

"It is good you have remained focused to the cause. It is always good to do what you are best at," Kadaga said drawing huge applause from students and staff. Kadaga, who also speaks French, was also excited to hear that one of the St. Lawrence campuses is offering French among foreign languages.

"As a country we have ignored French, Arabic, Chinese and Germany; but in this global world we need more than one language," she said.

"It's important for the young people to learn more than one language so that they are marketable."

She urged St. Lawrence to offer more languages for that matter.

About climate change, Kadaga said, "This is a real problem", urging students to plant trees and protect the environment. She asked students to commit every holiday to planting just five trees, saying by doing this they will be protecting the environment.

The chairman board of directors of the schools, Mike Ssebalu said the whole idea of mock debates is to empower strategic thinking among students.

The rector of the schools, Maria Justine Turina, said the practice of mock debates is to build students coming out of these institutions with a national view, regional perspective, continental dimension and global outlook.

She said that the debates also empower students with public communication skills because they are critical and vital in one's life.

"You can go out there with all the knowledge and skills but if you cannot communicate, one becomes less impactful to society," said Turina.