MENU
Cycle your way to a healthy heart
Previous Story

Bell pepper good for your eyes
Next Story

Naked, covered in white clay mud, and with his penis wrapped in leaves, Abongile Maqegu, 20, sits in a hut in South Africa recovering from his circumcision -- a traditional ritual that can prove fatal.

For Maqegu, it has been a gruelling initiation test that marks his arrival as an adult, and the pain is an essential part of the experience.

"You must go through that pain to show that you are a man," he told AFP outside the coastal village of Coffee Bay about 100 kilometres (60 miles) from Umtata in Eastern Cape province.

Maqegu is one of thousands of youths from the Xhosa ethnic group attending this year's annual winter initiation schools across Eastern Cape province.

After his foreskin is cut off by a tribal elder using a knife, he is kept in the small thatched rondavel hut with two other initiates for up to four weeks, with a "bush doctor" present at all times monitoring their wounds.

The initiates are allowed no contact with women, and spend their time playing cards, applying mud and stoking the smoky fire to try to keep warm.

"If you go to hospital you are weak, you are not a man. Your wound must not be treated with Betadine (disinfectant)," Maqegu said.

"There is special traditional medicine for that and it heals fast."

He revealed tree leaves tied like a bandage around his genitals, which are also covered in a traditional healing ointment and held to one side by string. 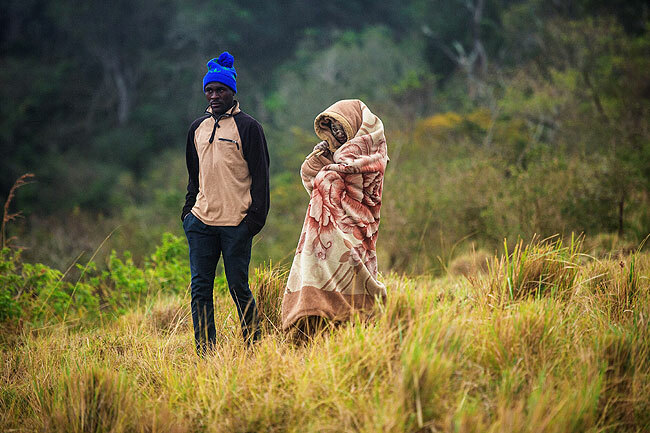 Traditional Xhosa initiate Khanyisile Mapope (R), 18,  walks with a man through a field during a traditional initiation process. (AFP)

The ritual is revered and guarded by the Xhosa people, but the unhygienic conditions -- and abuse by some initiation schools -- exacts a heavy toll.

At least 11 youths have already died during this southern hemisphere winter in Eastern Cape, according to provincial officials, while the government says several hundred have died nationwide in initiation schools since 1995.

Often the cause is infection from a botched circumcision, which can lead to penis amputation surgery.

Circumcision has also been demonstrated to be a powerful weapon in the fight against HIV, by helping to protect men from the AIDS virus.

But specialists -- meeting in Paris from Sunday for a four-day forum on HIV/AIDS -- remain worried about botched operations and poor hygiene.

Other risks include dehydration or maltreatment by initiation leaders, who conduct the secretive circumcision rituals deep in the mountains.

'Recognised as a man'

In another grass-thatched hut, 200 metres away, sitting on a reed mat, is 20-year-old Fezikhaya Tselane, who has just returned from his circumcision rites in the remote bush.

As he nurses the sore wound, his bush doctor sits close by, surrounded by dirty pots, plates and empty beer bottles strewn over the floor.

"I have been waiting for this day. All my brothers have gone through this process," Tselane told AFP, entirely covered in white mud, which is meant to ward off evil spirits as well as preserve body warmth.

"In our Xhosa culture, if you don't go through traditional circumcision you are not recognised as a man.

"Now I can marry, have my own house and kids and not depend on my parents." 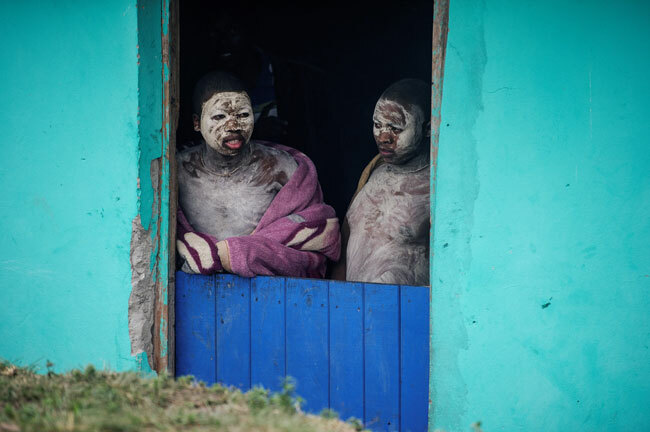 The circumcision ritual is revered and guarded by the Xhosa people. (AFP)

Mxolisi Dimaza, chairman of the Eastern Cape provincial health committee, said authorities were determined to curb injuries and deaths in the initiation schools.

"This year a considerable amount of resources were made available so that we do not experience many more deaths," he told AFP after his recent field visit to several initiation sites.

"However, there are still problem areas where we have illegal initiation schools. These are where the school itself is not registered and the initiates are often below 18 years old."

The province has hired 35 4x4 vehicles to patrol initiation practices in a region of steep hills, dirt roads and rough tracks.

It has also passed a law setting out a minimum age of 18, and establishing a registry of accredited bush doctors and schools.  From the age of 16, boys can be circumcised with their parents' permission.

Dimaza appealed for any initiates suffering from infections or ill-health to go immediately to hospital, adding that parents should not feel social pressure for their children to have traditional circumcisions.

"It is our culture -- but if the parents want their child to have it medically, we don't object," he said.

The tradition has become tainted in recent years by commercialisation, with some bush doctors charging large amounts of money, while some initiates have been found to be as young as 13.

Initiation ceremonies have also spread to other provinces such as KwaZulu Natal and Mpumalanga, boosted in part by UN-backed information that male circumcision reduces the risk of heterosexually-acquired HIV infection by 60 percent.

For one bush doctor, proper care should mean that initiates are able to experience the ritual in a safe and deeply spiritual manner.

"You have to be careful and take good care, otherwise the wound gets sceptic," said Lukholo Marhenene, 21, who has been nursing initiates for three years.

"You must change the leaves often and keep the wound clean and dry.

"During the month I will be attending to him, he stays in the hut. Only his father and other boys who have already gone through initiation are allowed to visit.

"After two weeks, we slaughter a goat to appease the spirits."