You need a technical team before building ...
Next Story

“The housing policy is not all about helping people in slums to have a roof on their heads, but to generate many things such as economic growth.”

“The housing policy is not all about helping people in slums to have a roof on their heads, but to generate many things such as economic growth.”

KAMPALA - A simplified version of the Uganda National Housing Policy has been launched.

It was unveiled by officials from the lands, housing and urban development ministry in partnership with Human Rights Network Uganda (HURINET-U) and Water Aid Uganda.

Samuel Mabala Shibuta is the commissioner for human settlement in the lands ministry.

He hailed their partners for working with them to simplify and summarize the housing policy to make it easy for everyone to read and interpret.

The housing policy was developed to dissolve distortions and contradictions in order for all Ugandans to have a right to adequate housing, clean water and sanitation.

"The housing policy is not all about helping people in slums to have a roof on their heads, but to generate many things such as economic growth," said Shibuta.

He brought up a proposal of building night shelters for the homeless, including children and the elderly. 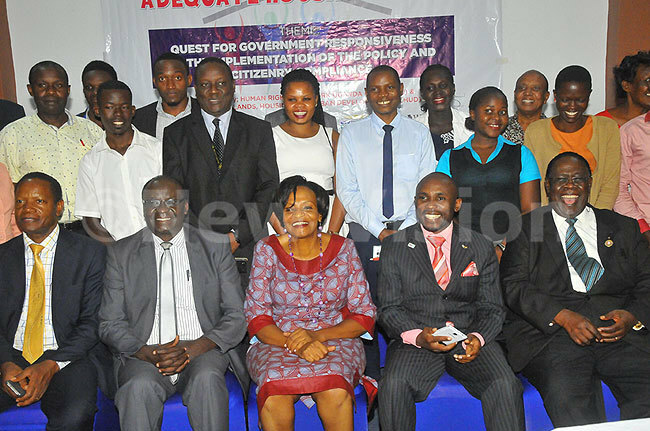 Officials in a group photo with partipants at the launch meeting. (Credit: Wilfred Sanya)

Homelessness in Uganda, currently estimated at three percent of the total urban population, is steadily growing and posing a potential danger, according to a report by the lands ministry.

The report, prepared by the National Habitat Committee, highlights the gravity of the situation, saying that homelessness - absence of a house to live in - has been growing steadily in the urban areas since the late 1980s.

"It's not good to see Ugandans on streets homeless. We are working hand-in-hand with organizations and local authorities to help in implementing these policies because they are responsible for their communities," said Shibuta.

Working with local authorities and other stakeholders will help in skilling homeless people through various trainings in order to do more productive work, he added.

This, in turn, will play a fundamental role in improving their standard of living and probably enable them afford shelter.

Mohammed Ndifuna, HURINET-U's executive director, said Uganda's housing policy implements the right to improved standard of living, adding that stakeholders ought to know what the policy contains to make it easy to tackle the right to adequate housing.

"It's our fundamental call to work hand-in-hand with each other to help in implementing this policy to the grassroots level in order to create awareness amongst the locals," he said.

Justine Rubanga, also from HURINET-U, said some of the objectives of the housing policy they plan to implement are creating awareness, strengthening the public and private partnership, creating a linkage between clean water and sanitation and also examining strategies of policy implementation.

UNBS warns public against counterfeit goods ahead of festive season