Coriander leaves: Beyond the irresistible ...
Next Story

Harvey had his hands and feet amputated at the age of two, following a sepsis infection.

Harvey had his hands and feet amputated at the age of two, following a sepsis infection.

PIC: In this undated photo provided by the Children's Hospital of Philadelphia in Pennsylvania, Zion Harvey of Baltimore, Maryland poses with his newly transplanted hands. (AFP/CHOP)

The first child in the world to undergo a double hand transplant is now able to write, feed and dress himself, doctors said Tuesday, declaring the ground-breaking operation a success after 18 months.

The report in The Lancet Child & Adolescent Health provides the first official medical update on 10-year old Zion Harvey, who underwent surgery to replace both hands in July 2015.

"Eighteen months after the surgery, the child is more independent and able to complete day-to-day activities," said Sandra Amaral, a doctor at Children's Hospital of Philadelphia, where the operation took place.

"He continues to improve as he undergoes daily therapy to increase his hand function, and psychosocial support to help deal with the ongoing demands of his surgery."

Harvey had his hands and feet amputated at the age of two, following a sepsis infection. He also had a kidney transplant.

Harvey was already receiving drugs to suppress any immune reaction to his kidney, which was a key factor in his selection for the 10-plus hour hand transplant surgery.

Immunosuppressive drugs must be taken continuously to prevent a patient's body from rejecting the transplant. These drugs carry risks, including diabetes, cancer and infections.

Doctors reviewed both the successes and challenges Harvey and his family have faced, noting that a large team of specialists was hard at work supporting them through all the ups and downs.

The child has "undergone eight rejections of the hands, including serious episodes during the fourth and seventh months of his transplant," said the report.

"All of these were reversed with immunosuppression drugs without impacting the function of the child's hands."

Harvey continues to take four immunosuppression drugs and a steroid.

"While functional outcomes are positive and the boy is benefitting from his transplant, this surgery has been very demanding for this child and his family," said Amaral. 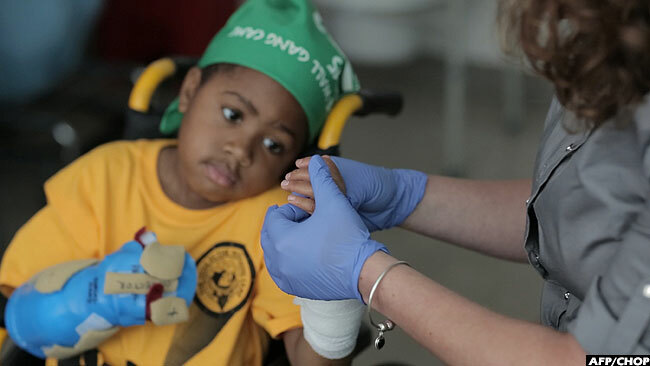 Before the double hand transplant, Harvey had "limited ability to dress, feed and wash himself through adapted processes, using his residual limbs or specialist equipment," said the report.

His mother hoped he would one day be able to dress himself, brush his teeth, and cut up his own food.

Harvey, for his part, wanted to climb monkey bars and grip a baseball bat.

The donor hands became available in July 2015 from a deceased child.

Within days of the surgery, Harvey discovered he could move his fingers, using the ligaments from his residual limbs.

"Regrowth of the nerves meant that he could move the transplanted hand muscles and feel touch within around six months, when he also became able to feed himself and grasp a pen to write," said the report.

Eight months after the operation, Harvey was using scissors and drawing with crayons.

Within a year, he could swing a baseball bat using both hands.

He also threw out the first pitch at a Baltimore Orioles game last August.

Regular meetings with a psychologist and a social worker were part of the recovery process, aimed at helping him cope with his new hands.

Scans have shown his brain is adapting to the new hands, developing new pathways to control movement and feel sensations.

"The world's first double hand transplant in a child has been successful under carefully considered circumstances," said the report.

The first successful hand transplant in an adult was completed in 1998.