"All sporting and cultural activities are banned across the national territory for the rest of the electoral campaign."

"All sporting and cultural activities are banned across the national territory for the rest of the electoral campaign."

PIC: People look at the scene after a wall collapsed at Demba Diop stadium on Saturday in Dakar. (AFP)

Senegal has suspended all sports and cultural events until elections at the end of the month, a day after eight people died in a football stadium disaster.

Legislative elections are due on July 30 and tensions are running high with prominent opposition leader and Dakar mayor Khalifa Sall campaigning from jail.

"All sporting and cultural activities are banned across the national territory for the rest of the electoral campaign," Seydou Gueye, a spokesman for the prime minister, said.

A judicial inquiry will be opened to investigate the tragedy and determine who was responsible for Saturday's incident, he said.

A wall collapsed in a Dakar stadium during extra time at the League Cup final between Stade de Mbour and US Ouakam which was marred by clashes between rival fans and police use of tear gas.

At least 88 people were injured, according to official media.

Campaigning for the elections by the ruling coalition of President Macky Sall was also suspended Sunday out of respect for the victims. 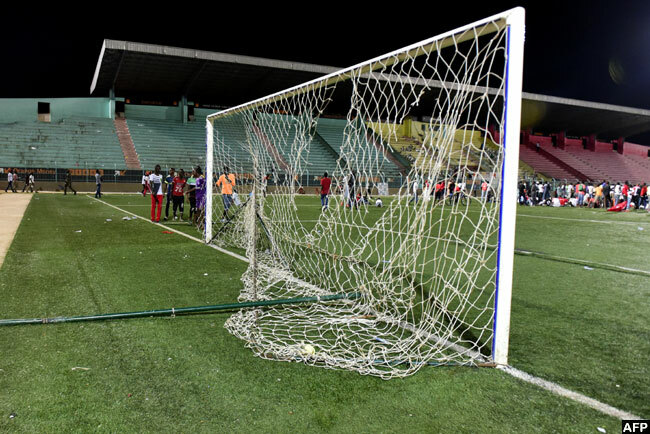 A vandalized goal is seen at Demba Diop stadium

The president said in a statement he was "outraged" at the lives lost, promising better security in Senegal's stadiums and swift justice for the families affected.

"Sporting events are not a place used for the expression of violence," he said, referring to the clashes between fans.

Meanwhile Senegal's police defended themselves against accusations of negligence over the alleged retreat of officers from an area separating rival fans when projectiles were thrown.

Supporters created a stampede as they sought to escape, according to witnesses.

"The police's job is not to charge but to manage the crowd," a statement sent to AFP said, blaming US Ouakam fans in a "blind fury" for causing panic when Mbour scored to go up 2-1 in extra time.

On Friday rival supporters of President Sall and Mayor Sall -- who are not related -- clashed in northern Dakar armed with knives, and several people were injured, as tensions remain high over the campaign.

Senegal's safety record at large gatherings has been heavily criticised this year after the death of dozens of people at a religious retreat in April when a fire ripped through makeshift shelters.