It is visible that extensive excavations have taken place, with yellow mark stones erected on the land

It is visible that extensive excavations have taken place, with yellow mark stones erected on the land

Paul Waseba (48) had five fish ponds, two acres of sugarcane and banana plantation with 100 eucalyptus trees at the bank of Bugolobi-Mpanga Close wetland on plot M468 in Nakawa Division, Kampala. 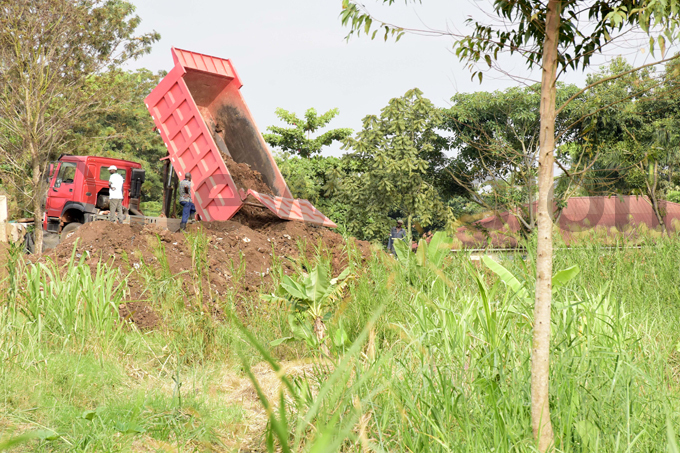 A truck dumps soil in the wetland on Sunday evening. Photo by Maria Wamala

Waseba is of the thousands of farmers who have been utilising the 22-acre Bugolobi-Mpanga wetland for agriculture.

However, his investments in the wetland that earned him about sh2m monthly are no more. A private construction company has reclaimed the wetland to set up villas and modern commodity warehouse.

When New Vision visited the place at around 4:45pm on Sunday, the team counted five trucks that dumped soil and sped off in the space of an hour.

A resident at Mpanga Close, off Binayomba Road in the city suburb of Bugolobi, who preferred anonymity, told New Vision that he had counted about 20 trucks that started dumping soil at the Mpanga close wetland from about 10:00am. 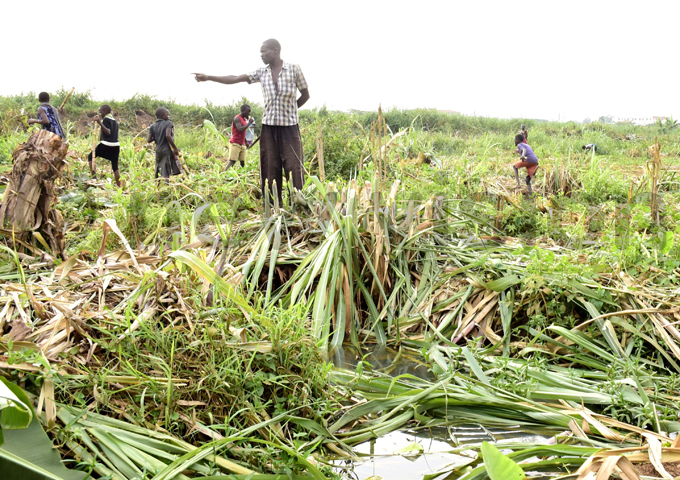 The resident said the initial dumping was to clear way for a road to the site. Seven men, including a security guard, were at the site. There was a stationary excavator vehicle parked at the site. However, it had no occupants.

But it was visible that extensive excavations had taken place, with yellow mark stones erected on the land. A boda boda cyclist told New Vision that mark stones were placed on the land on July 10.

Several trees had been felled, and the remains of lumbering activity, including several pieces of timber, lay aside.

However last month, Okurut said, "Cabinet is yet to decide on land titles in wetlands either to be cancelled or not." 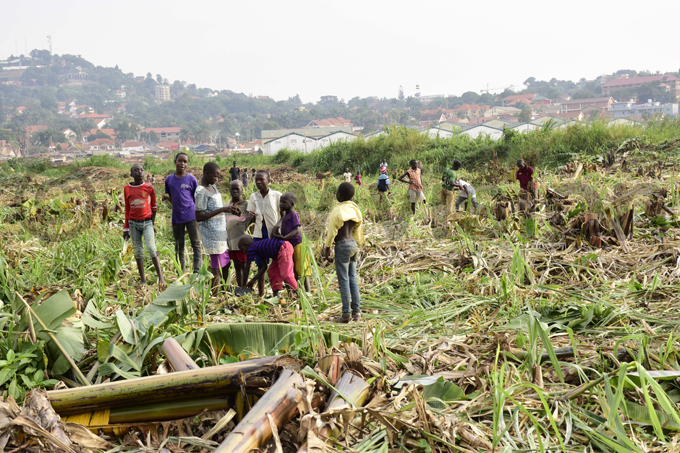 This implied that NEMA could not stop the ongoing excavations and developments in Bugolobi-Mpanga Wetland.

In a letter written on April 12, 2017 and signed by Okurut, he clarified that plot M468 Mpanga close, Bugolobi is excluded from cancellation of titles.

The letter states that the disputed land title could not be cancelled since its original title for the land was issued before 1995.

"The purpose of this letter is therefore to clarify that plot M468 Mpanga close, Bugolobi Nakawa Division, Kampala is excluded from the current exercise of cancellation of titles issued in the wetlands. Look forward to our continued collaboration," the letter reads.

Similarly, On May 25, 2011, NEMA issued a certificate of approval allowing the construction company carry on with the developments.

The approval certificate had several conditions including, compensation of all people including farmers on the land.