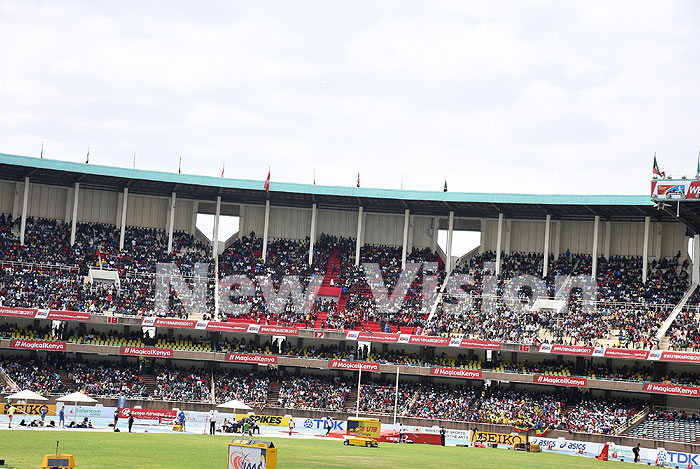 One last chance remaining for Uganda to get a medal.
TOP sports event STORY
4 years ago .
IAAF World U18: Uganda's medal hopes fade
Chelimo and Kwemoi could just not get a hold of a medal.

The Moi International Sports Complex was packed on Sunday. (Photo credit: Johnson Were)

NAIROBI - Uganda's hopes for a medal at the IAAF World U18 Championships took a big hit on Sunday as Titus Given Kwemoi and Oscar Chelimo failed to impress in the boys 3000m final in Nairobi.

Ethiopia's Selemon Barega won it to bag gold with a personal best time of 7:47.16 as Kenya's Edward Zakayo took silver with 7:49.17, also a personal best.

Another Kenyan, Stanley Mburu Waithaka, came in third to take bronze with 7:50.64.

Once again, it turned out to be a Kenya v Ethiopia affair, a subplot seen so often in global endurance running.

Kenyan duo Zakayo and Waithaka were cheered on heavily seconds before the starting pistol was fired. Much as the home interest and focus was on them, the two young athletes had their sights set on the formidable opposition that was Ethiopian pair Barega and Mengesha.

And from the word go, Barega took charge at the front, creating breathing space between him and the rest.

Not long after though, the rest of the runners caught up with him, creating a lead pack involving Ethiopians, Kenyans, Ugandans and Eritrean interest.

Along the way, Uganda's Kwemboi trailed but with countrymate Chelimo staying in close touch with the front group.

At around 1:35, Waithaka got clipped and took a tumble, but he showed great character by picking himself up and rejoining the lead pack.

With four of the seven-and-a-half laps to go, Chelimo remained in the thick of the plot at the front as the Kenyan and Ethiopian pairs went about their tactical business.

But when the final-lap bell was rung, the intense race was reduced to a four-way conclusion as Barega eventually turned on the afterburners to peel away from the other three in a thrilling last 100m to take gold.

Uganda's remaining interest is Joel Kiplangat, who runs a little later in the 2000m steeplechase final.

The curtains draw on the five-competition in the Kenyan capital. In fact, it is the last edition of the biennial international athletics competition for youth athletes.