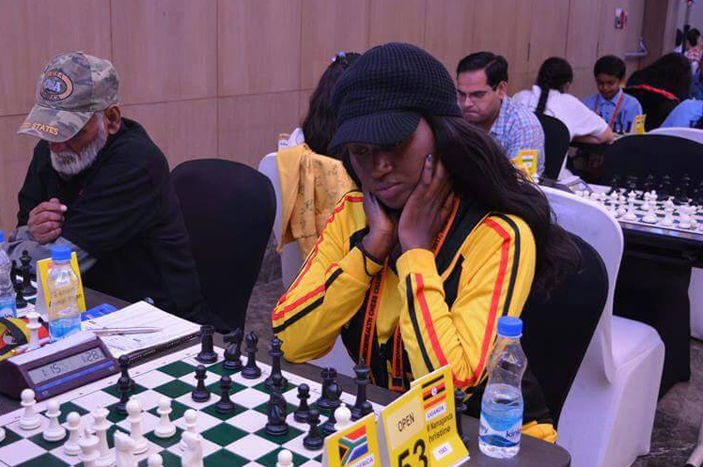 After three consecutive losses in her opening games, Uganda's Woman FIDE Master (WFM) Christine Namaganda was able to register a maiden on Thursday evening at the ongoing Commonwealth Championships in New Delhi, India.

In a game that looked like it would end in a draw, on Tuesday evening, Namaganda lost to Saranya in what she described as a panic attack.

Namaganda told New Vision Sport that all was well until the last eight minutes of the game.

"The Tuesday game would have easily ended in a draw if I had not run out of time which of course got me in panic mode. I went through a brain freeze making wrong moves which my opponent took advantage of to beat me," said Namaganda.

The game against Russia's Aron Klevansky the following day didn't end any differently for Namaganda.

However she managed to outsmart India's Akshitha Goud Pally with a perfect win today to register her first win.

Namaganda cruised her way to a sweet win when she checkmated her opponent in 26 moves.

Rated 1565, she takes on another Indian player Abirama Srinithi (1751) on Friday looking to extend her winning streak.

Namaganda, now ranked 108 at the contest will have to win all her remaining five games if she is to end the contest in the top 100 positions.