Professors Venansius Baryamureeba, Edward Kirumira and Barnabas Nawangwe are the three candidates to choose from.

Professors Venansius Baryamureeba, Edward Kirumira and Barnabas Nawangwe are the three candidates to choose from.

KAMPALA - The three candidates vying for the Makerere University vice chancellorship will by the end of today (Wednesday) know their fate as the university senate meets to deliberate on who is the most suitable person to take over the top job.

Makerere University Academic Staff Association (MUASA) chairman Muhammad Kiggundu, who is the member of the body, confirmed the development but declined to give details about the important meeting.

The three candidates in the race include Prof. Edward Kirumira, the principal of the College of Humanities and Social Sciences and Prof. Barnabas Nawangwe, the deputy vice chancellor in charge of finance.

Also in the race is Prof. Venansius Baryamureeba, a former vice chancellor of the university, who is seeking a comeback after he left in 2012 to start a private university.

Outgoing VC Prof. Ddumba Ssentamu, who chairs the senate, was unavailable for comment by the time of writing this story.

New Vision has, however, learnt that such secrecy is not unusual as it is intended to protect the sanctity of the process. 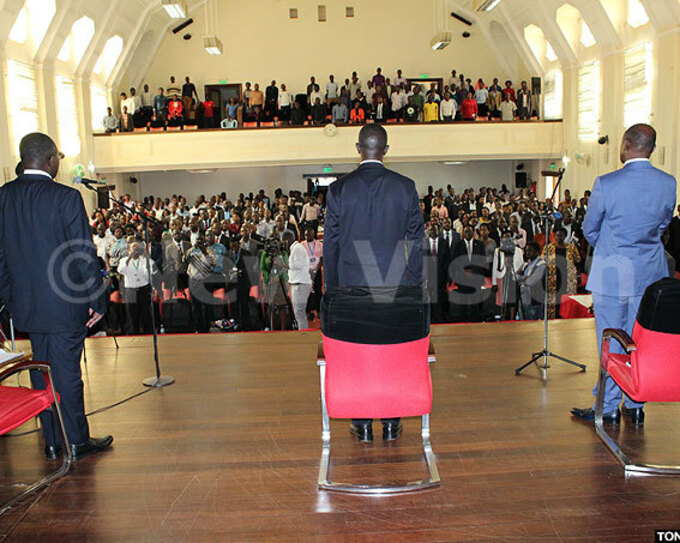 During the voting process, the candidates have to face the vote at two levels — first at the senate and then at the council.

Ssentamu chairs the senate which is made up of 62 members while the council, which has 26 members, is headed by Dr. Wana Etyem.

According to the arrangement, at the end of today, two names that will be selected through a vote will be sent to the chancellor, Dr. Ezra Suruma to make the final pick.

During the process, the candidate with the least number of votes is eliminated. At the time the campaigns ended, sources told New Vision that some candidates had started claiming that they were being backed by either State House or Ministry of Education top officials including education minister First Lady Janet Museveni and the state  minister for higher Education, John Chrysostom Muyingo .

But senior presidential press secretary Don Wanyama denied the links. "That is a lie. I cannot validate such a lie," he said when contacted.

Education ministry spokesperson Aggrey Kibenge said: "I wouldn't want to talk for the (First Lady). But knowing her, that (backing a candidate) is something she is incapable of. She is always a person who wants fairness and which makes that allegation wide off the mark."

Makerere University is expected to announce a new vice chancellor before August 31, when Ddumba's term comes to an end.

Baryamureeba's bid to return to the top

Kirumira to give colleges more powers