The pungent meal is quick, cheap and tasty, but the fish is also a favourite feast for parasites that can cause a lethal liver cancer.

The pungent meal is quick, cheap and tasty, but the fish is also a favourite feast for parasites that can cause a lethal liver cancer.

PIC: A farmer chops fresh fish for lunch in the northeastern Thai province of Khon Kaen. Millions of Thais across the rural northeast regularly eat koi pla, a local dish made of raw fish ground with spices and lime. (AFP)

It wasn't until he got to medical school that Narong Khuntikeo finally discovered what caused the liver cancer that took both of his parents' lives: their lunch.

Like millions of Thais across the rural northeast, his family regularly ate koi pla -- a local dish made of raw fish ground with spices and lime.

The pungent meal is quick, cheap and tasty, but the fish is also a favourite feast for parasites that can cause a lethal liver cancer killing up to 20,000 Thais annually.

Most hail from northeast, a large, poor region known as Isaan that has dined on koi pla for generations and now has the highest reported instance of the Cholangiocarcinoma (CCA) -- bile duct cancer -- in the world.

One of the major causes of CCA is a parasitic flatworm -- or fluke -- which is native to the Mekong region and found in many freshwater fish.

Once eaten, the worms can embed undetected in the bile ducts for years causing inflammation that can, over time, trigger the aggressive cancer, according to the World Health Organization.

"It's a very big health burden around here... it effects families, education and socioeconomic development," said Narong, who went on to become a liver surgeon to battle the scourge.

"But nobody knows about this because they die quietly, like leaves falling from a tree."

After seeing hundreds of hopeless late-stage cases on the operating table, Narong is now marshalling scientists, doctors and anthropologists to attack the "silent killer" at source.

They are fanning out across Isaan provinces to screen villagers for the liver fluke and warn them of the perils of koi pla and other risky fermented fish dishes.

But changing eating habits is no easy task in a region where love for Isaan's famously chili-laden cuisine runs deep. 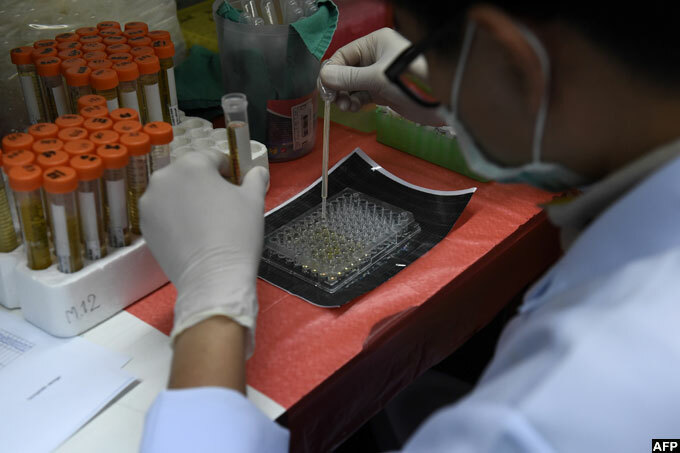 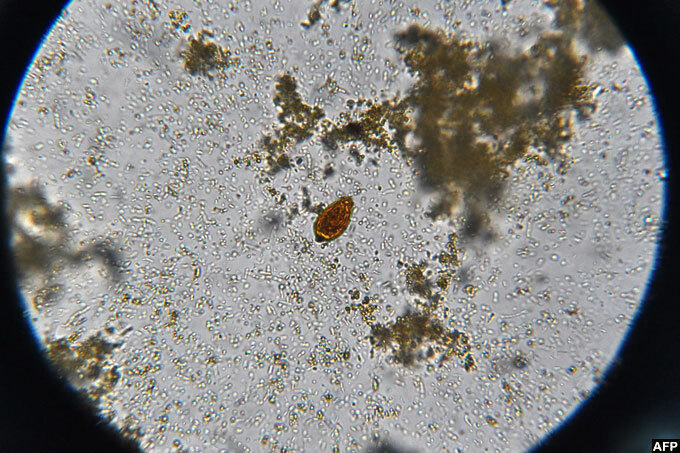 A flatworm egg as seen under a microscope

Many villagers are shocked to hear that a beloved dish passed down for generations is a danger rather than a comfort.

Others are wedded to the convenience of a thrifty lunch they can whip up using fish caught in the ponds that border their rice paddies.

"I used to come here and just catch the fish in the pond... it's so easy to eat raw," said Boonliang Konghakot, a farmer from Khon Kaen province, licking his lips as he sprinkled seasonings into a bowl of the finely-chopped fish's pink flesh.

Since learning of the cancer link he has started frying the mixture to kill off the parasite -- a method doctors recommend.

Yet not everyone is as easily swayed, according to Narong and his team.

Many villagers complain that cooking the dish gives it a sour taste.

Others simply shrug off the dangers and say their fate has already been fixed -- a common belief in the Buddhist nation where karma can dictate decisions.

"They'll say: 'Oh well, there are many ways to die,'" lamented Narong. "But I cannot accept this answer." 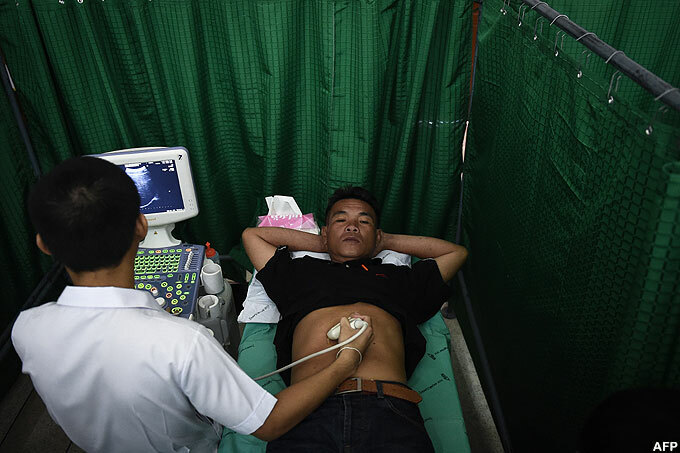 When it comes to changing eating habits, health officials are pinning their hopes on the next generation, targeting children with a new school curriculum that use cartoons to teach the risks of eating raw.

For the elderly, the target is to catch infections before it's too late.

Narong and his team have developed urine tests to detect the presence of the parasite, which has infected up to 80 percent of some Isaan communities.

They have also spent the past four years trucking ultrasound machines around the region to examine the livers of villagers who live far from public hospitals.

"I've never been checked before, so I think I will probably have it because I've been eating (koi pla) since I was little," said 48-year-old Thanin Wongseeda, one of 500 villagers lining up for a recent screening in Kalasin province.

The group ticked off a series of high-risk factors: they were over the age of 40, had a history of eating raw fish and had family members with the cancer.

A third of them showed abnormal liver symptoms and four were suspected to have cancer.

Thanin was one of the lucky ones, emerging from his ultrasound with a look of relief.

"I don't think I will eat (koi pla) raw anymore," he told AFP with resolve. As for his neighbours?

"They will not quit it easily."

Nets are best against malaria

How does malaria continue to kill millions?