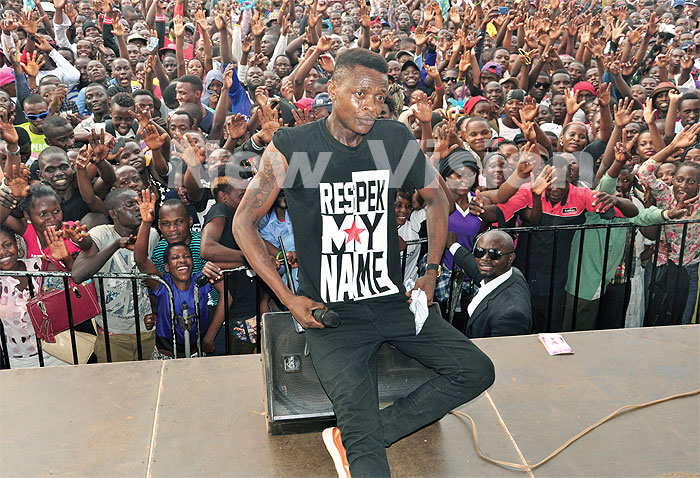 Singer Dr Jose Chameleone has spent over two decades top of Ugandan music charts, but has in the recent years been silent. This weekend, he is holding a comeback concert to assert his claim to the throne. His ‘Legend: Hit after hit' concert is slated for June 30 at the Lugogo Cricket Oval in Kampala. Caroline Ariba had a chat with him about love, life and his career ahead of the show.

His reputation has been marred by drama in the recent past, so finding a starting point to chat up the self-proclaimed ‘music doctor' was quite a challenge.

However, the naughty smile on the side of his face showed that Joseph Mayanja, better known as Dr Jose Chameleone, also knew it was about to get uncomfortable. To ease him into the conversation, it had to be the ‘now' of his life and a question about what was new. "What is new?" he re-echoes. "It is a different time.

"With this concert, we are trying to do something. We are trying to certify the career!" The concert he speaks of is partly sponsored by Vision Group and Uganda Breweries, among others, and comes after almost two years of silence. This should give cause to worry, right? Asked if he, too, had noticed a slackening in his musical career, his voice gets bigger and he quickly roars; "No, no, no! I mean if you are saying it has been slow, then how fast should it be?"

After a back and forth, the multi award winning artiste shrugs in defeat, throws his hands in the air and cries out: "Aren't I entitled to a break?" "Fans should stop customising people or else they are gonna wind up having substandard music," he cautions.

"Music is art and art comes out at a time when you are feeling it. So last year, my drive was low." So what himself this whole time? "Farming," he says, bursting into a boastful grin. "I have a farm on a square mile in Mubende. I have another farm in Mityana. I have about 400 goats and 200 and something cows," he divulges.

Quickly, he changes the topic, insisting that his farming activities are not important and that it should be the music that matters here. "What is important is that music is good when served well. I do not want to be active when my talent mode is low," he emphasises.

As Chameleone lay low musically, was the man with a throng of hits to his name doing with releasing only few songs like Agatako (with Rwandan singer, Deejay Pius) and Sweet Banana, his personal life seems to have garnered more attention.

The timing was questionable and media was awash with news that his wife of nine years and mother of his four children, Daniella Atim, had fi led for divorce, citing violence against her by the singer. But many thought this was a publicity stunt. "The problem was that my marriage scandal fell into the public [sic] and yet marital scandals are easily solved in the bedroom," he says.

"But because I do not have loyal friends, it became a bit hard. So people were trying to say that we did not have a scandal. Yes we did, but it was only easier to solve after it got out to the public."

Asked if he lay hands on his wife, the Badilisha singer takes offence and makes sure it is known. "That is an inappropriate question at a time when I am trying to promote a positive image of Joseph Mayanja!" he laments. Pushed even harder, his face goes cold and he starts shaking his head. "No way, I did not do that. I would never do that!" he exclaims.

Now that that was out of the way, it was only fair that the topic got switched back to a comment he had made insinuating that upcoming artistes have it easy today. Does Chameleone, whose musical journey started in a Kenyan bus corridor, as he sings, really think today's artistes have it easy?

"Yeah!" he retorts, before going into full-blown praise of his career.

"But I am the organic food!" he pauses to let that sink in, continuing to liken the upcoming artistes to fast food while he, with a career spanning over two decades, is like a mother's home cooked meal. "It is like fast food; they have a lot of curry in it, but mom's food still tastes better. I am mom's food, always better!"

He then boasts of how the brand Chameleone was in existence way before many had TVs, let alone could browse Facebook. "A lot of these artistes claim to be international or whatever they call it," he says dismissively. Pressed to mention names, he insists on the next question, but then some how goes back to the topic.

"And just to remind those people who feel like, ‘oh I was on MTV', remember that I was nominated for MTV Europe!" he exclaims. "Not MTV Base Africa!"

I crosschecked with his claim and true to his claim, yes he was; back in 2006 in Berlin, Germany. American rapper Snoop Dog was there too. The singer was in attack mood and to push his buttons a little, I threw in the question about whether he would turn down the MTV Base award today.

"No, no, no! I would be happy to have it," he ironically interjects. Asked where he sees himself 20 years from now and if the up-and coming artistes would not have upstaged him, he laughs. Then in a calm tone, starts to make comparisons.

"I will be old and grey, as old as Tyson!" he exclaims.

When he notices the defiance at him equating himself to American boxing legend Mike Tyson; he goes into full defence mode again. "Listen to me. People should learn to tell the difference between princes and kings," he begins.

"Floyd Money Mayweather is a trendy name, but there is the name Mohammad Ali. He might be dead and buried, but a big name."