“Before joining the club I was so fearful, I could not speak out on anything, whether bad or good."

“Before joining the club I was so fearful, I could not speak out on anything, whether bad or good."

Children can be a foundation of peace if involved in the peace-building processes. This is the initiative children affected by the South Sudan conflicts currently living in Uganda are using to bring harmony in the refugee and host schools of Adjumani district.

Children who go to these schools come from different tribes, both from host communities and from South Sudan.

As a result of the differences in cultures, schools had started experiencing conflict and violence among children, a condition that would in turn culminate into huge fights amongst parents of affected children. Sometimes parents would go to the extent of going to fight in the schools when their children fought amongst themselves, causing a lot of commotion.

In a bid to address this issue, children have been supported to form school clubs within the schools in the refugee settlements and host communities of Adjumani district with the aim of promoting protection and peace through life skills development.

With funding from ECHO and SIDA, 15 school clubs have been formed in the primary schools in the key targeted settlements where conflict was reported to be high.

Through these clubs, children become confident and feel empowered to demand their rights and challenge any sources of conflict.

Manjeri Nandera, a Child Protection in Emergency officer with Plan International, says the club activities include school debates, music, dance and arama, plays, and supporting fellow children to report cases of abuse both at home and in school.

She says each club is composed of 24 children (12 girls and 12 boys) and has a club patron or matron to oversee the activities of the children. 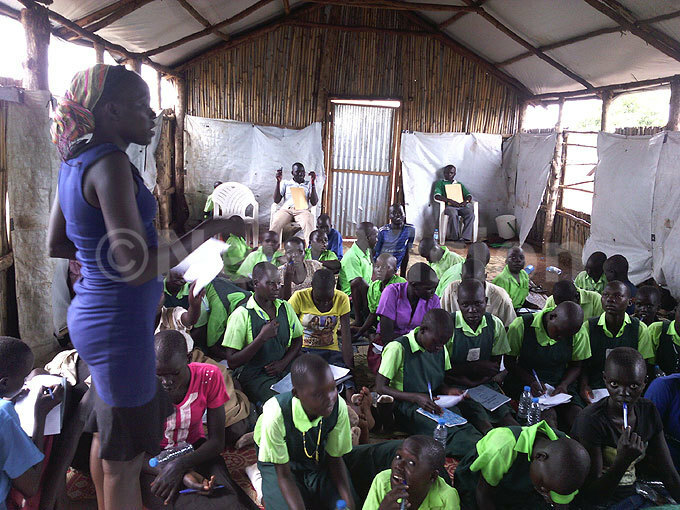 "Guided by teachers, the children selectively choose topics for debates with the aim of bringing about equal opportunities and leveling the ground for everyone," says Nandera.

She adds that to make the clubs relevant, children have been trained in life skills, child protection mechanisms, peace building and conflict resolution.

'I was so fearful'

Julia Anzoo, 15, a pupil in one of the schools, says the reason she joined the school club is she wanted to get a group which would support her with skills and share ideas on how to complete her studies.

"Before joining the club I was so fearful, I could not speak out on anything, whether bad or good, but now I am able to participate in the school debate, and speak out on everything. I also did not know that as a child I could speak about my rights, which I have learnt from the school club," she explains.

Anzoo adds that as girls in the club, they always advise fellow friends not to join bad groups and this has helped them not to drop out of school.

Another pupil, 14-year-old John Amoko, says that dance and drama groups help them forget their differences in tribes.

"During school competitions, we work as a team; we forget about our tribes and focus on the goal of winning. After this we become good friends with each other," he says.

Fred Amalma, the club patron of one of the schools, says the clubs have brought about a lot of change to the children in the schools where they exist. He notes that before the clubs were introduced, children lived in fear and there was violence among them.

"These days I see the children in the school club have changed in terms of interacting with each other due to the life skills trainings. The children now have confidence while debating, participating in drama groups and providing advice to other pupils in the school," says Amalma.

As the club patron, he says he supports children to come up with the club's name as well as developing and implementing the activity plan.

Rtd soldier charged with unauthorised use of army uniform