Fishermen drown each other on Lake Victoria

The fights among fishing communities, involving the use of machetes, clubs and arrows, in the waters happen at night.

The fights among fishing communities, involving the use of machetes, clubs and arrows, in the waters happen at night.

Some fishermen, especially Ugandans have engaged the (mukene) fishermen in fights in the waters, accusing them of depleting the lake of food (mukene) for Nile perch. The Nile perch fishers also claim that solar lights scare away Nile perch.
Nowadays, a first time visitor to the lake shores would be forgiven to think they are approaching a town. During the night, a big number of mukene fishermen use solar lights to catch fish.
But studies conducted fisheries scientists at the National Fisheries Resources Research Institute (NAFIRRI) indicate that although Nile perch eats other fish species, mukene is not its major food.
The Wakiso fisheries officer, Michael Lubuulwa, says: "The fishermen have started fighting over the lake and destroying each other's fishing materials on Lake Victoria. Nile perch fishers now envy mukene fishers because it appears we still have silver cyprinid and we are running out of Nile perch."
Fights have previously taken place at Lyabaana and Ziiru landing sites. The fishermen at Lyabaana mainly concentrate on fishing Nile perch while their counterparts at Ziiru are majorly interested in mukene. The fights between the two fishing communities, involving the use of machetes, clubs and arrows, in the waters at night.
"Usually, one group overpowers the other. They destroy the boats and engines and the take away their fuel. The overpowered fishermen are left stranded in the middle of the lake and only those that can swim to the landing sites survive. Some have drowned," Siraje Bugingo, a fisherman, says. 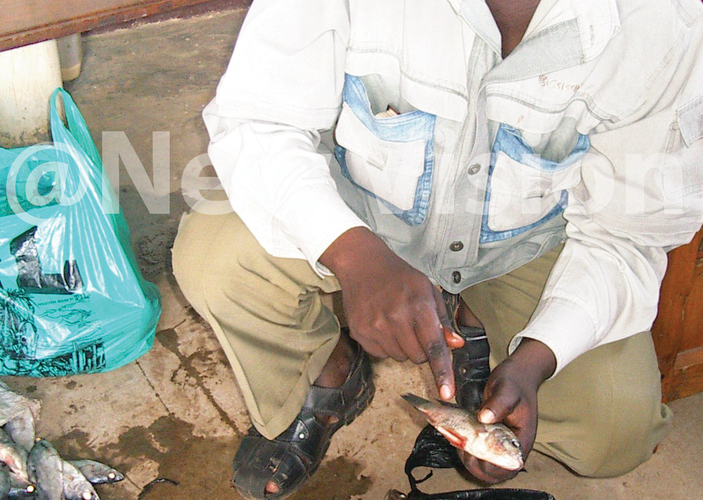 Injured fishermen speak out
One of the victims Lasto Musoke said, "Our attackers numbering about 30 travelling in different boats, attacked us as we were fishing ‘mukene' (silver fish) in Zziiru waters, surrounded our boat and  started beating us using stones, sticks and metallic objects which they were holding".
"As some were tormenting us, others attacked our colleagues from far off, and subjected them to a similar treatment; they were also asked to throw away their oars as a sign of surrender to them, jumped onto our boats, took away the petrol jerrycans and the motor engines,  destroyed our boats and those of us who could swim did so. We were thrown overboard as our attackers took off".
"We were rescued by our colleagues who were also fleeing from the attackers and we were taken to local health facilities,and later to Kawolo hospital for treatment."
Other patients treated at Kawolo after sustaining injuries during the attacks on the lake include Robert Wasswa, Muhammad Ndagu, Noah Sekamatte, Paul Siija and Frank Lweso.
"We survived because we jumped into the water. We swam and called for help from other fishermen from Ziiru in the lake. By the time, we were rescued, we were about to drown," Sekamatte, whose head has been stitched, says.
He explains that they have reported attacks on them by their counterparts from Lyabaana, but the fishers at (Lyabaana) are so rich that any case reported against them to the Police has not been pursued.
According to Buikwe deputy resident district Commissioner Emmy Mitala, the battle was orchestrated by rich fishermen who he said mobilized youths to attack mukene fishermen.
"The rich fishermen accused mukene fishermen of using strong solar lights that attract mukene but at the same time dispel the nile perch.
"When we realised that situation was getting out of hand, we wrote to the Minister for Agriculture Vincent Sempijja to intervene and stakeholders from Buvuma, Buikwe and Mukono districts were summoned for a reconciliation meeting in Entebbe. But as this was in progress, the president assigned Maj. Nuwagaba to pacify the lake, and his intervention seems to have restored peace on the lake," Mitala
The Kawolo Hospital administrator, Haruna Wamala, says: "We often receive casualties of varying degrees of injury and our role is to administer treatment to patients as they come without asking details surrounding their injuries. We however keep their records."
Kigongo states that the residents also suspect the foreigners, including some at Lyabaana, are heavily protected by security officials and that some of the men who operate the boats on the lake are armed. 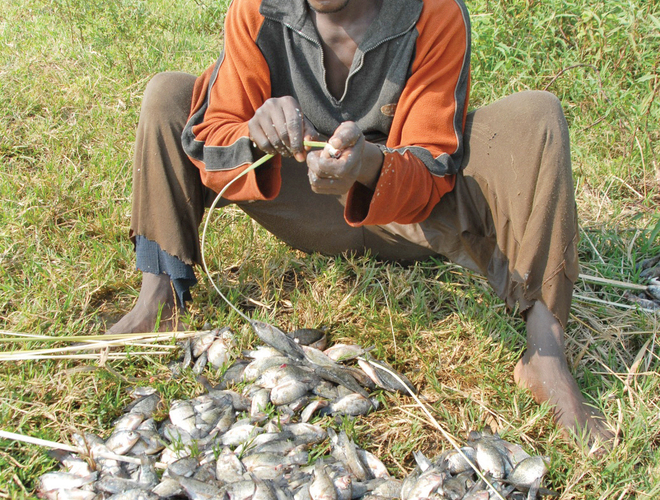 "The local fishermen feel cheated that they are not working yet they see mukene being packed into trailers to be transported to DR Congo and Rwanda. That is why they have resorted to fights that have sometimes led to deaths," the district chairman explains.
But the attacks are a tip of an iceberg. There are several criminal activities on the lake, including among others, smuggling and prostitution.
Rukunya says the agriculture ministry has banned the use of solar lamps in the lake, but our investigation has revealed they are still being used.
"The solar lamps would not be bad in fishing mukene, but we realized they were many and the light intensity was high," Rukunya adds.

Cargo flights to fall over COVID-19