The rise and fall of Gaddafi's heir apparent
Next Story

Few choose to live in Aburoc, a desolate ash-grey landscape of flies and dry rivers.

Few choose to live in Aburoc, a desolate ash-grey landscape of flies and dry rivers.

The conflict in South Sudan and its massive population displacements have produced many names synonymous with misery. The latest is Aburoc, a northeastern village where aid workers face the toughest of challenges.

In the space of a few days, this remote settlement in Upper Nile State, close to the Sudanese border, grew by 30,000 as men, women and children fled yet another government offensive.

Few choose to live in Aburoc, a desolate ash-grey landscape of flies and dry rivers. The earth, bone dry now, is "black cotton" a type of soil that turns into a sucking quagmire with the first of the year's rains.

Yet it was to this flat, tree-dotted land that many of the inhabitants of the town of Kodok fled in late April as government troops attacked their home. They carried possessions on their backs, children in their arms and fear in their bellies.

"The needs were huge. People were living under the trees," says Mario Zuazua of the International Committee of the Red Cross (ICRC), one of the few aid agencies in Aburoc.

"We decided it was very urgent to do a distribution of 'non food items': tarpaulin, mosquito nets, soap and jerrycans to carry water," he adds. 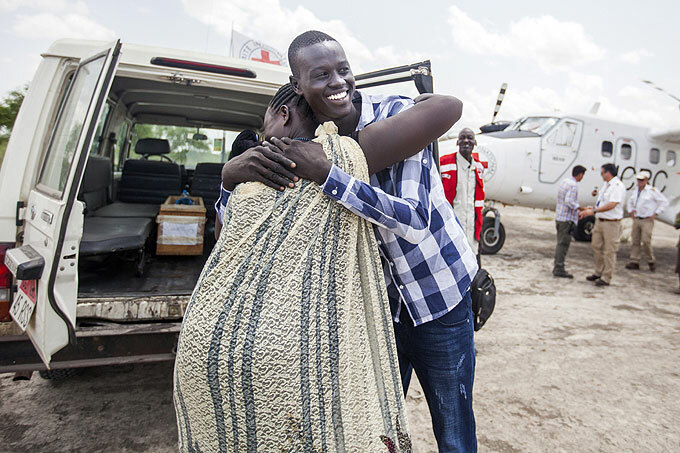 Emmanuel Samuel, 17, hugs his mother, Georgina Pagan as he reunites with her after landing in Aburoc. (AFP)

The ICRC dug water wells. There were three manual pumps for the village of a thousand people, a number that proved woefully inadequate for up to 30,000.

With the increased population and lack of clean water, cholera quickly followed. The charity Doctors Without Borders (known by its French acronym, MSF), deployed an emergency team which at once was working at full tilt, with 40 patients in isolation tents and 30 new suspected cases brought every day.

MSF launched an anti-cholera vaccination campaign targeting 11,000 people which, combined with the ICRC's efforts to treat water with chlorine, brought an end to the cholera outbreak this month.

"At the moment the situation is stabilised," says Nicolas Guiral, field coordinator for MSF. "But it was tough because it was really in a short time and you are obliged to do with such difficult conditions: one hour of heavy rain here and for the next two days, you have mud everywhere."

In the meantime, many of those who fled Kodok for Aburoc opted to keep moving, crossing the border into Sudan, the country South Sudan won its independence from six years ago. 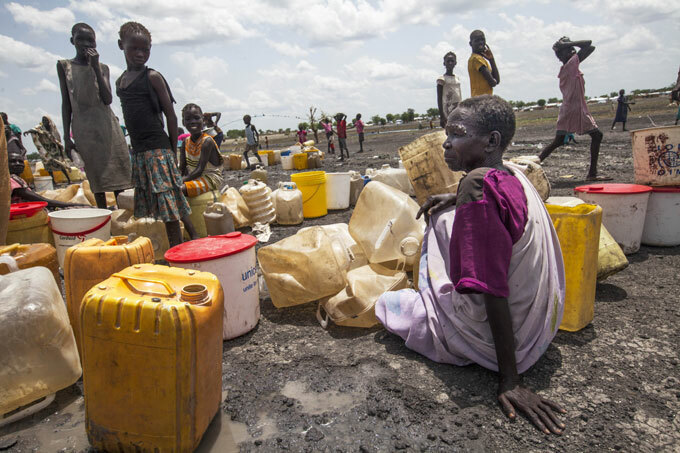 There are now around 10,000 displaced people living a precarious existence in Aburoc, in wooden shelters covered with white tarps.

"We are going to stay here," says Faulino Tipo Deng, one of the leaders of the displaced, who believes that conditions are no better in Sudan and that returning home is not an option.

"We don't want to go back there for the moment. In Kodok, all the houses and our belongings have been looted. Same thing for our cattle and donkeys," he says. "If you go to Kodok, you won't even find a mattress remaining. Everything has been taken."

At the beginning of the year, government forces, known as the SPLA, launched a major offensive from the garrison town of Malakal crossing to the western bank of the White Nile and pushing north towards the Sudanese border.

Several towns switched hands, among them Wau-Shilluk, Kodok and Kaka, all part of the centuries-old Shilluk tribal kingdom.

The offensive preceded the rainy season which, because of South Sudan's lack of basic infrastructure such as paved roads, makes it impossible to transport troops, and reflects government efforts to claw back control of both banks of the Nile, a crucial transport lifeline.

Aburoc was likely spared -- and therefore became a squalid refuge -- simply because it is not on the river.

But with the rains about to begin in earnest aid workers are hoping for a period of peace, but preparing for the seasonal challenge of malaria, the risk of resurgent cholera and the danger that competing crises and funding shortfalls might threaten life-saving interventions, including food deliveries.

"I know it's difficult because there are so many emergencies everywhere in the country," says Guiral. "But here we are still talking about 10,000 people."