BoU, AG ordered to file defence over Ssemw...
Next Story

According to Msgr Kasibante, the marathon has been organised to raise funds for the construction of the Nkozi hospital’s emergency unit/causality ward.

According to Msgr Kasibante, the marathon has been organised to raise funds for the construction of the Nkozi hospital’s emergency unit/causality ward.

The speaker of parliament, Rebecca Alitwala Kadaga will be the chief runner of the second Nkozi hospital Marathon which will be held on June 17.

This was revealed by the Vicar General of Kampala Archdiocese and board member of Nkozi hospital, Msgr Charles Kasibante at launch of the second marathon with some of the sponsors being Centenary Bank, Movit products at Mapeera house on Thursday.

According to Msgr Kasibante, the marathon has been organised to raise funds for the construction of the Nkozi hospital's emergency unit/causality ward. 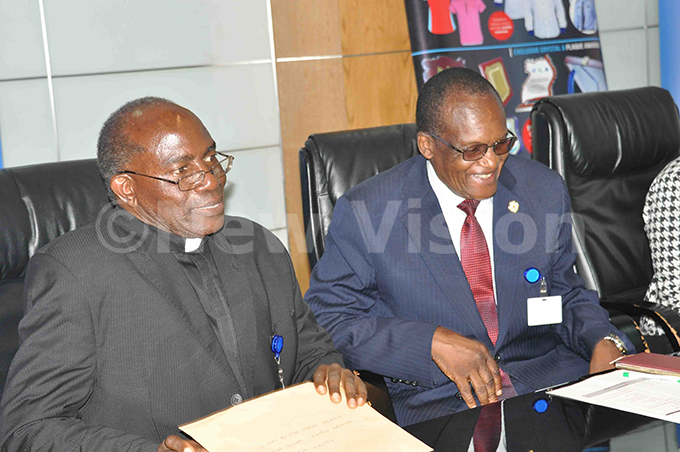 Kadaga will be the chief runner for the Nkozi Marathon, which will take place on Saturday (June 17).  The 2nd marathon has been organised to continue raise funds for the construction of the hospital's emergency unit/causality ward.

The marathon will be flagged off at the Equator at Kayabwe by Emmanuel Cardinal Wamala; it will start at 7:00am at Equator at Nabusanke and end up at Nkozi University, speaker of Parliament, Rebecca Alitwala Kadaga will be chief runner of 5km and Prince David Wasajja to be chief runner 10km

He said that sh2.8b is needed for accident ward, "we call upon Ugandans and well-wishers to participate for this noble cause.

"I call upon drivers to drive well as well as respect roads, lives of other people who are using them," Msgr Kasibante said.

He revealed that construction of emergency ward needs sh2.8b, "we call upon government to come over to rescue the hospital."

He asked government to continue funding development projects of faith-based hospitals. Nkozi is one of the mission hospitals in Uganda and gives services, government should continue  support on this noble cause so that the hospital gets an emergency ward.

Nkozi Hospital is church founded established in 1942 by the White Sister and presently managed by the sisters of Immaculate Mary Reparatrix Ggogonya.

However, Sister Teddy Nakyanzi, the hospital administrator syas, " we get many patients from different places, including accident patients who need immediate emergencies treatment and referral treatment anytime, but due to lack of those facilities sometimes we fail to help them."

She said that the hospital which will also celebrate 75 years of existence on October 21   needs funding for emergency unit because of the very many accidents on Masaka high way.They are many accident patients reported weekly but the hospital has no facility to handle these victims.

"Many people whose lives would have been saved but end up dying on their way to referral hospitals, that's why we embarked on raising money," Sister Nakyazi said.

She added the hospital receives over 15 accident victims a week. She encouraged all Ugandans of good will to buy marathon tickets at sh10, 000. She also encouraged people to make mobile money contributions using telephone number: 077 3 358 690.

The government gave the hospital up to Sh20m towards the cause. The hospital located 83km along Kampala-Masaka high way is a referral facility which has 8 lower level units with service population of over 100, 904 people