Broccoli out of season, cauliflower price ...
Next Story

“It is important that we push for development with this mutual accountability to which the Heads of State and governments agreed."

“It is important that we push for development with this mutual accountability to which the Heads of State and governments agreed."

Come January 2018, Africa Union (AU) member states will be required to submit progress reports on agricultural commitments to the Ethiopia-based commission for review.

At the end of the 13th Partnership Platform Meeting of the African Union flagship Comprehensive African Agriculture Development Programme (CAADP) at Speke Resort Hotel in Kampala on Friday, a set of 43 indicators to be used in the review were spelt out.

Josefa Sacko, the African Union Commissioner for Rural Economy and Agriculture, had at the opening of the meeting on Wednesday reiterated the goal to keep track of progress in the sector that employs millions as is seen as key to food security.

"It is important that we push for development with this mutual accountability to which the Heads of State and governments agreed, as a factor that will contribute to the realisation of the targets that we have," she said.

According to Ernest Ruzindaza, advisor to the Agriculture Commissioner, the AU member states are guided by CAADP as the continental framework agreed upon at the heads of state summit in Maputo, Mozambique in 2003. The one that followed was made in Malabo, 2014, he says.

Ruzindaza says the Heads of State agreed to pursue targets of 6% annual growth in agricultural GDP and an investment of at least 10% of their respective national budgets to agriculture.

With the heads of state having agreed to report to the African Union on the progress in achieving these targets once every two years, the first round is scheduled for January 2018.

Dr. Godfrey Bahiigwa, the Director of the African Union Department for Rural Economy and Agriculture says the Heads of State made a call to the AU Commission and partners in the Malabo Declaration to complete the requirements of the biennial reporting mechanism of CAADP.

"We have worked closely with the Regional Economic Communities and the New Partnership for Africa's Development (NEPAD) to make this possible," he said. 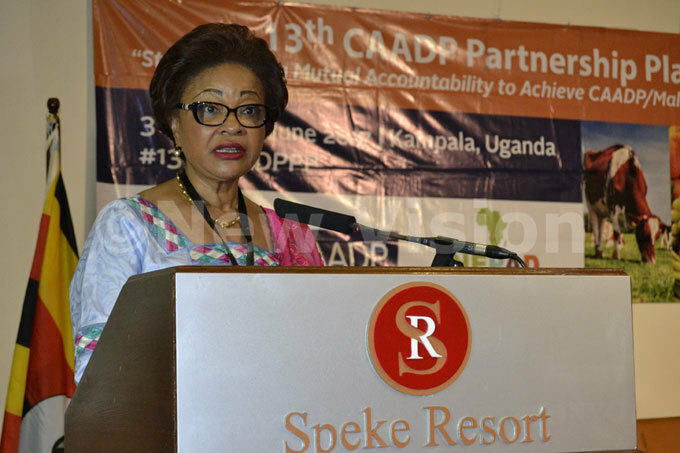 Bahiigwa added that the African Union Commission is ready with all relevant documents and that the member countries have received comprehensive training on how to handle the process come 2018.

"We set 43 indicators that will be used in the review, trained the experts in member countries and also developed a template that will be used in reporting. The process is also clear and will be effective with all reports having to be first validated at country level with all stakeholders on board," he said.

To address the language challenge, Bahiigwa said that the tools needed and the raining have also been translated into the languages requested by the heads of state, including Arabic and Portuguese among others.

Christopher Kibazanga the Uganda State Minister for Agriculture who welcomed delegates on behalf of government, expressed the country's commitment to agricultural development guided by targets at continental level.

"We are committed to supporting agriculture through development of infrastructure, agro-industrialisation and investment in post-harvest technologies to reduce the huge losses in agricultural products. We are also aware of the high youth unemployment rate and are working to address this," Kibazanga said.

As noted by Dr Agnes Kalibata, President of the Alliance for a Green Revolution in Africa (AGRA) governments of the member countries need to work more closely with the private sector and the farmers to achieve the desired targets.

"We cannot work in a vacuum. We have to invest in building the capacity of the farmers and the business community for them to be more involved and informed to enhance efforts towards achieving these targets," Kalibata said.

According to Dr Alex Ariho, the Chief Executive Officer of the African Agribusiness Incubators Network, the youth remain a major engine for African countries to deliver on the Malabo targets.

"If you are looking at ending hunger and halving poverty by the year 2025 which is about 8 years from now, you have to invest in innovations and enterprises that are youth-led. The same are the answer to the African Union target of employing at least 30 percent of the unemployed youth in agriculture," he says.

The 13th Partnership Platform Meeting of the African Union Comprehensive African Agriculture Development Programme (CAADP) closed on Friday afternoon with the next scheduled for 2018.

'I do not force people to give' - Mayiga

Kiiza, the owner of a sh12b publishing empire

Children with disabilities: "We are just like you, we have dreams and talents too."

Children with disabilities: "We are just like you, we have...