Mbabaali appeals to gov't to re-open close...
Next Story

Topista Kibatenga 63, Lusiya Tumusiime 56 and Jane Tigiita 53, have been braving the long journey and trekking to Namugongo for the last six years. They are among the first group of people that walked from Nyarushanje parish in Kabale diocese in 2012.

When their local church announced for interested people to walk to Namugongo, the trio was among the first people to register.

"I saw this as great opportunity for me because I had always wanted to walk to Namugongo as a way of strengthening my faith. I thought I would not reach because of my old age but by God's grace I was able to reach but with a lot of pain in my feet," Kibatenga said.

"The second time, I came to thank God for enabling me to reach well and renew my faith. On the third time, I just wanted to see if I can reach again and God made it possible gain. I started believing that God exists and started coming with my prayer requests. This year I have come to ask God to enable me trek for more three years," she added. 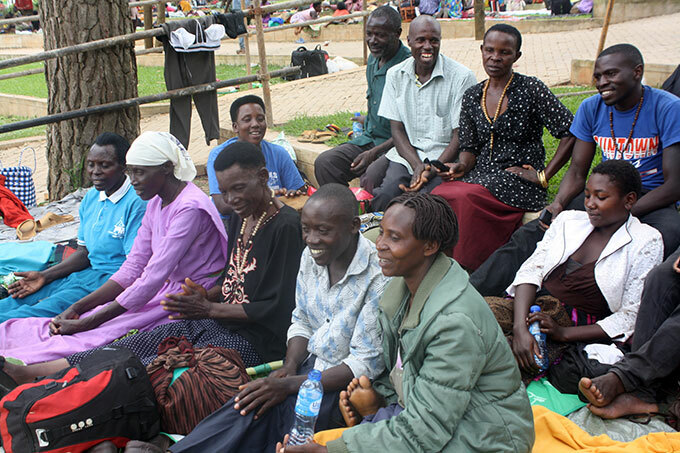 Tumusiime said that for the six consecutive years she has been trekking to Namugongo, most of her prayer requests have been answered.

"The first time I came, I wanted God to protect my family because we were undergoing a lot of trials. I prayed through the martyrs and by faith I have been seeing change over the years," she said.

She added that this time she has come to pray to God to give her life and strength to keep walking to Namugongo and thank him for his blessings, pray for the Catholic Church and also pray for the nation to have peace, giving an example of the recent gruesome murders in the country.

Tigiita said that when she went to register among the people interested to walk, she met Tumusiime and Kibatenga who shared similar goal. She joined them and they started on the journey only six people but over time, the number of people has been increasing.

"Walking comes along with blessings although it is tiresome. At times its risky moving at night but God has always been on our side and we have not been countering many challenges along the way," she added.

Some of the challenges they faced on the way included, coldness especially in the night, feet swellings, walking while sleepy because of tiredness and mosquito bites especially Masaka district.

The trio was part of the twenty-two people that started walking from Nyarushanje parish on May 21. It took them nine days to reach Namugongo, a journey of about 444.7km.