The phenomenon of presidentialism must be dealt with and examined," says Prof. Joe Oloka Onyango of Makerere.

The phenomenon of presidentialism must be dealt with and examined," says Prof. Joe Oloka Onyango of Makerere.

KAMPALA - For Uganda to sort out internal contradictions and set a firm foundation for institutional building, the idea that everything begins and ends with the president must be tamed, Makerere University Law Don, Prof. Joe Oloka Onyango, has said.

Describing the overcentralisation of power into the hands of President Yoweri Museveni as the "phenomenon of presidentialism", Oloka said the phenomenon partly has its roots in the colonial history of the country.

"The idea that everything begins and ends in the Governor's chambers is leading to internal colonialism. The phenomenon of presidentialism must be dealt with and examined," he said.

Oloka was speaking at the launch of a book titled: "Militarism and the Dilemma of Post-Colonial Statehood: The Case of Museveni's Uganda," at Makerere University School of Law.

The book traces the origin of Uganda's problems and the role of the military in breeding ground for unsettled historical differences and intra-tensions.

"It is important for us to go beyond the notion that the problem of Uganda is based on individuals — Obote, Mutesa or Museveni," said Kabumba (pictured below).

"Don't get caught in the ‘agende' language (Museveni should go), but rather we invite you to think about the unresolved tensions and conflicts, which have provided a toxic condition for explosion.

"In my view, there is need to deal with this toxic condition before it burns the country," . 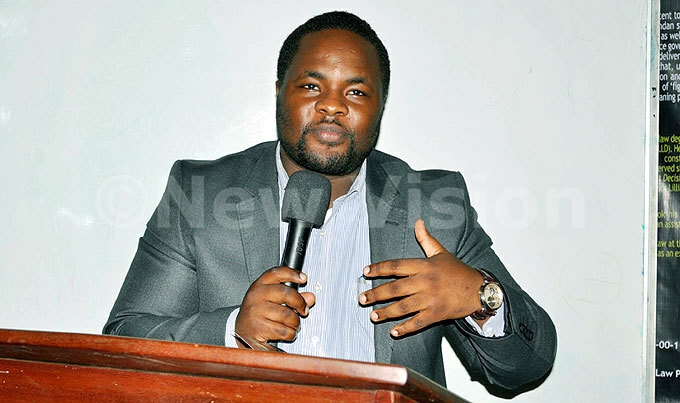 Citing the interaction between former Chief Justice Wako Wambuzi and one of the colonial administrators in 1962 as captured in Wambuzi's book The Odyssey of a Judicial Career in Precarious Times, Kabumba said "the strongest will govern" concept has influenced the country's political landscape since independence.

"Force established Uganda as a country. Therefore, we need to think about dialogue so that we harmonise the internal differences and create a future that we will all enjoy rather than using force to postpone problems and subdue internal contradictions," he said.

In his discussion of the thesis of the book, Dr. Paul Omach, from Makerere University Department of Political Science and Public Administration, said the problems of Uganda are structural.

"The military is not bad, but it personalized security which is bad. Therefore, the issues we are dealing with are structural. The issue is largely not a change of guards but laying structural foundations," he said, noting that the only roadblock that the National Resistance Movement (NRM) is facing the transition to democracy versus regime consolidation dilemma.

"Building a viable democracy is a challenge but the fact that we are trying to do as a country is good enough," Omach said.

Commenting on the concept of militarism, presidentialism and what Omach called the hybrid (quasi democratic and militaristic) nature of Museveni's regime, Don Wanyama, the senior Presidential Press Secretary, told New Vision that the constitution has provided checks and balances for all the three organs of Government— executive, parliament and judiciary.

"All organs have processes through which they check the excesses of any of the three organs of government. Therefore, the biggest issue to look at is how we should strengthen constitutionalism in the country.

"The challenge at hand is to make the rule of law stronger because even if you are to trim the powers of the President, you might get another Idi Amin, who will not even respect the constitution," he said.

Woman arrested for dumping baby in a latrine