Should I tell him the child he buried is n...
Next Story

From the jaws of poverty to girls' rights campaigner

When I remembered the effort my grandmother had put in to see me succeed, and the impact Samaritan schools through bursaries had had on my education, this journey of grace taught me that everyone needs a hand extended to them so that they can realise their dreams

Brian Mutebi distributing scholastic materials to some of the children beneificiaries

When I remembered the effort my grandmother had put in to see me succeed, and the impact Samaritan schools through bursaries had had on my education, this journey of grace taught me that everyone needs a hand extended to them so that they can realise their dreams

Hid for nine months after birth by his young mother who was then a nursing student at Mulago School of Nursing and midwifery, Brian Mutebi grew up with his paternal grandmother in abject poverty in Kikandwa village, Mityana district.

"Her elder sister had earlier got pregnant while in school and was severely beaten and chased away from home by their father, fearing to go through the same experience, she opted to hide me from her family until nine months when she took me to my paternal grandmother," says Mutebi. 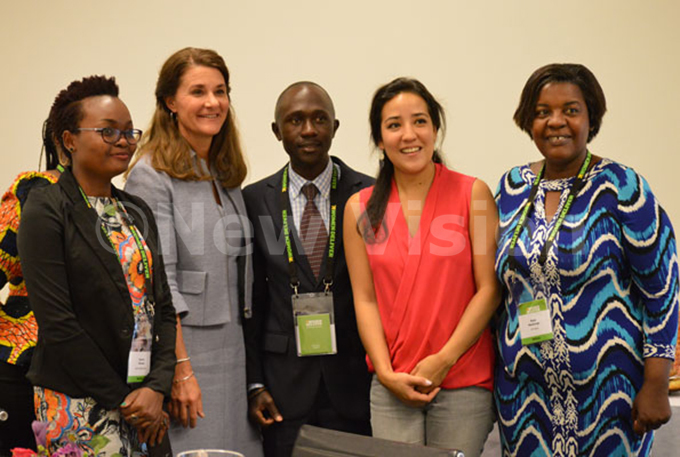 Brian Mutebi with Belinda Gates and other participants at the Women Deliver conference in Copenhagen, Denmark

Life in Kikandwa was harsh; his grandparents were peasant farmers living in a dilapidated mud and wattle house and making ends meet was a hustle, nevertheless, they gave it their all to see their grandson goes through school.

"I say she gave me what she did not have. She was illiterate but gave me an education. She worked tirelessly to see me through school," says Mutebi, who lost his mother in 1993 to HIV AIDS when he was just 10 years old.

Unfortunately, while in S.2, the coffee wilt disease that destroyed thousands of hectares of coffee gardens did not spare Mutebi's family, their small coffee garden from which they were surviving, was wiped away, making life even harder. 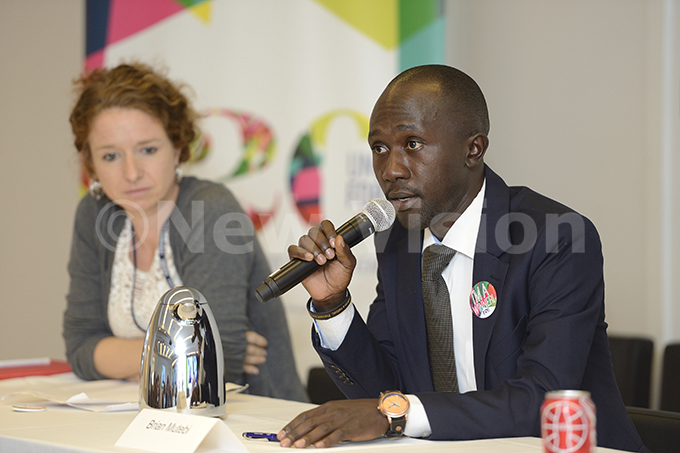 I use a pen to take up the case of girls and women, Brian says in New York

He almost dropped out of school, fortunately however, because he had been performing well in class, he was given a bursary at High Standard Secondary School, Kateera in Kiboga district where he studied uninterrupted upto S.4.

In A level, he joined Mityana S.S where he also studied on bursaries. "I was always the first or second in class, and the best three students in a class would get full bursaries, that is how I managed to go through A-level," he says.

He would later go on to get a government scholarship at Makerere University where he studied Tourism majoring in communication, project planning and management graduating in 2007.

"After graduating, I reflected and realized that lack of access to education undermines what would be successful lives. Education is one of the solid investments you make in someone's life.

When I remembered the effort my grandmother had put in to see me succeed, and the impact Samaritan schools through bursaries had had on my education, this journey of grace taught me that everyone needs a hand extended to them so that they can realise their dreams. I thus resolved to extend a hand to the children of the poor particularly vulnerable girls," says Mutebi.

Mutebi started by sponsoring six vulnerable girls in his village through their primary education using his meager earnings as a freelance journalist at the New Vision in 2008. He soon realized that God had entrusted him with a big vision to help hundreds of girls, and thus it should not be confined to a single village of Kikandwa but rather the whole country.

As such, he registered an NGO, Education and Development Opportunities Uganda. So far, the organization has registered 27 beneficiaries, 18 girls and 9 boys.

The organization mostly concentrates on survivors of Gender based violence, teenage mothers and HIV Aids orphans. It is the first scholarship scheme targeting GBV survivors. One of the beneficiaries of the project is Lisandra Kabagenyi, who is a second year law student at Makerere University.

"Education and Development Opportunities under the tutelege of Brian Mutebi has been of great help to me. They are paying my tuition and all the other needs that facilitate my education at university, and every day, my dream of becoming an attorney for the underprivileged and voiceless women gets into shape," Kabagenyi says.

The organization is also into girls and women empowerment. Mutebi says, economic empowerment of women is very key to achieving total women emancipation. "I have stories of women who are widows to the living, meaning that though their husbands are alive, they don't provide anything at home, but rather drink themselves silly. As a women's rights campaigner, we aim to empower these women economically," he says.

They have since started giving vulnerable women soft loans to boost their economic wellbeing through the Her wallet project. They have so far started with women groups in Nansana and God willing; they plan to roll out the project to the entire country.

The Her Wallet project kills two birds at ago, empowering women financially and solving the challenges vulnerable women go through to get capital, notably sexual harassment and at times loosing property used as security to get the money.

Mutebi is also into advocating for rights of women and girls through the pen. Mutebi says he grew up in a society where violence against women was rampant and acceptable, and has over the years watched teenage mothers suffer stigma and discrimination.

"My aim is to bring to both national and international attention issues affecting women and girls through writing," says the award winning retired journalist.

As a journalist, Mutebi documented stories of survivors of sexual violence in Gulu, Female Genital Mutilation victims in Kapchorwa, girls in refugee camps and the struggles they go through every day, as well as capturing voices of women who have no access to family planning and reproductive health services and are having children by chance and not choice.

"The turning point was when I visited a refugee camp in Rwamwanja in Bundibugyo district and of 48718 refugees, 84% of them were children and many of them were pregnant and carrying babies instead of books," Mutebi says.

Because of his work in advocacy for girls and women's rights, Mutebi has won a number of awards and recognition. In September this year, Mutebi was a winner of the global 120 under 40 new generations of family planning leaders by John Hopkins University, USA.

The global award was in recognition of people ‘who have had significant contribution in family planning and reproductive health and have got a strong vision for the feature.'

It is hard to handle this work single handedly and as such, we need partners so as to make a big impact. We also need ambassadors for this charity who connect willing hearts to the area of practical need.

Mutebi's plan is to establish an online information and data resource center on women's health.

Because I was the sole bread winner for my family, my charcoal business was struggling because all the profits and at times capital were being consumed by family. But through the Her Wallet project, I got a loan of sh400, 000 and reinvested into the business. The Her Wallet project empowered me financially and even trained me on how to ably handle my business.

Mutebi is a very big hearted, hardworking down to earth young man. He is out to defend the rights of voiceless especially the underprivileged girls and women and to empower them through education and economic empowerment.  It is a dream that looks ambitious, but with passion and determination, it's a a dream that he will accomplish.