Ugandans wake up to reality of disabled si...
Next Story

“There is need for everyone to do everything within their power to conserve the rich history and heritage of Kampala and Uganda at large,”

(From L-R) The Mengo Medical Director, Dr Rose Mutumba, the British Ambassador for United Kingdom to Uganda Peter West and the Irish Ambassador to Uganda H.E Donal Cronin during an event to mark the preservation of the first medical ward in Uganda on Thursday 18, 5 2017. Photo by Shamim Saad

“There is need for everyone to do everything within their power to conserve the rich history and heritage of Kampala and Uganda at large,”

There is a grave danger Kampala is soon to become the only city in the world without a history, according to John De Coninck the Technical advisor, Cross-Cultural Foundation of Uganda (CCFU).

On Thursday the world marked International Museum day and CCFU held two events in Mengo celebrating the preservation of historical properties in Kampala. 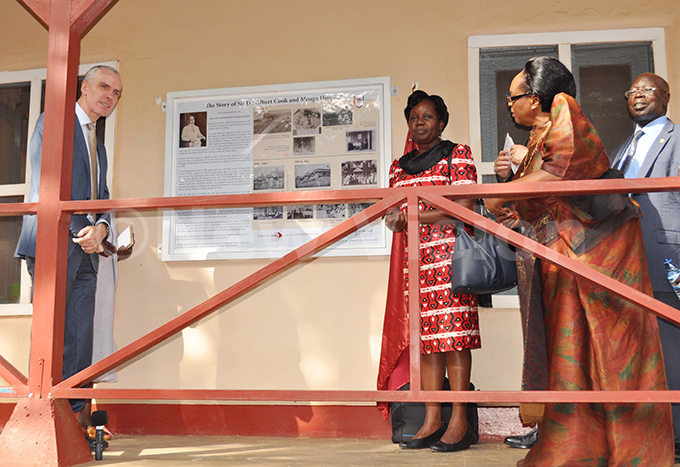 De Connick raised an alarm that historical buildings in Kampala are fast disappearing before our eyes.

"There is need for everyone to do everything within their power to conserve the rich history and heritage of Kampala and Uganda at large," he said.

Just in March, many residents of Kampala and Ugandans especially those attached to football where left heartbroken when Nakivubo Stadium with its rich football history was razed.

Kampala authorities kept wrangling on whether the Stadium developers were working with or without approved plans in the boardrooms.

The city leaders could not stamp their authority and block the demolition and in turn allowed the developers without a care to erase history.

The Irish Ambassador to Uganda Donal Cronin speaking at the two events celebrating the preservation of historical properties said the historical structures risk being replaced by inappropriate skyscrapers.

He explained Ireland was faced with a similar challenge in the 1950s to 1960s in a rush to modernize as other European countries.

"We made a horrible mistake and by the time we realized we were destroying our history it was quite late.

It took for legislators to pass laws that listed and protected  historical buildings for us to salvage the little of our heritage that was left with a sense of security," he said.

He said the unique and beautiful architecture of Kampala needs to be preserved not only for today's use and enjoyment, but for tomorrow's generation as well to keep track of their history.

"It will be a win win situation. Besides giving a great sense of identity, it will be of economic benefit to the country attracting tourists and providing employment," he said.

Emily Drani the Executive Director CCFU also emphasised communities in the world have preserved their rich building's and culture much as they are modernized as rich.

"The preservation is about respecting what people before you have done to enrich your heritage and also respecting their skills and intellect."

She adds that it is also not about the money but the rich history that historical buildings with their unique architect needs to be conserved.

"We have had our leaders visit historical sites like Nelson Mandela's home and they have parted with good money to have a look at the house and learn of its rich history.

They should be able to wish the same for Kampala and Uganda," she said.

Rubaga division mayor Joy Ssebugwawo agreed there is need to identify more historical buildings to preserve and enrich our history.

Drani says they are waiting for legislators to pass the historical buildings law establishing procedure for nomination, designation and preservation for them to have a sense of security that historical buildings like the Uganda Museum, National theatre and a hosts of others will be preserved.

At the first event to celebrate the preservation of the first medical ward in Uganda (Catherine and Luke wards) at Mengo hospital, Ambassador Cronin unveiled an information board while at the 1902 Ham Mukasa family house in Mengo a plaque was unveiled.

Cronin emphasized there is need to appreciate more of our history to have a sense of identity.