One of the 400 endangered mountain gorillas that live in Bwindi Impenetrable National Park.

In the third and last part of our article on conservation of the endangered mountain gorillas' series, Fredrick Mugira explores the initiatives set up to ensure that humans and gorillas coexist.

In a small village of Nkwenda in Uganda's southwestern district of Kanungu, residents know each other. But five men are particularly very popular; thanks to the 19 years they have spent chasing gorillas away from the community and back into the forest of Bwindi Impenetrable National Park.

The men are members of the village's Human and Gorilla (HuGo) conflict resolution team - just one of an array of initiatives set up to ensure that people and apes can not only co-exist but also benefit each other's presence.

Up to 400 critically-endangered mountain gorillas live in the protected area. But they often escape to raid crops that local communities have planted next to the park, posing health risks to both the gorillas and the villagers.

Until, that is, a team from the Uganda Wildlife Authority and Conservation Through Public Health (CTPH), realised villagers could easily steer the gorillas back into the park if they followed them at a safe distance of about 20 meters while banging sticks and drums or blowing whistles.

"From there, the idea of HuGo was born," says Dr. Gladys Kalema-Zikusoka, chief executive officer of CTPH. Today, there are 108 HuGo members spread across 18 teams of three to six. They operate in Nteko, Rubuguri and Iremeera in Kisoro District and Bujengwe and Mukono parishes in Kanungu District. Now, whenever the gorillas raid crops, villagers call HuGo team members who can mobilise quickly to chase them back. 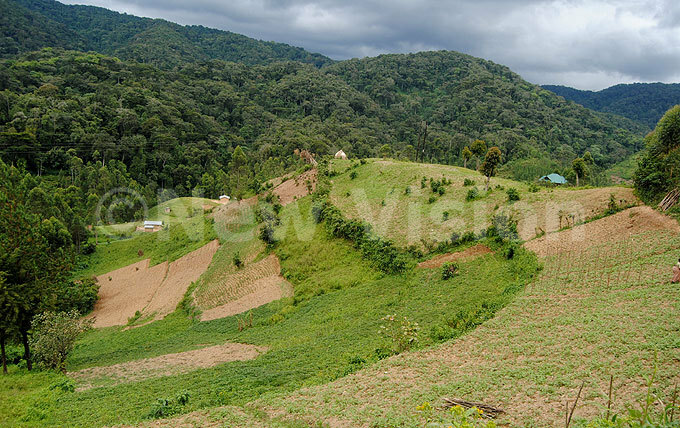 Some of the local people's gardens close to the park that are often raided by the wild animals.

The HuGo programme is a partnership between the Uganda Wildlife Authority, CTPH and the International Gorilla Conservation Programme, and the gorilla chasers are volunteers from areas adjacent to the park boundary.

"The team members are provided trainings to safely scare gorillas off community land and in collecting faecal samples from ranging gorillas for disease monitoring," says Dr. Kalema-Zikusoka, who adds that monitoring the health of gorillas, people and livestock "enables an early warning system for zoonotic disease outbreaks between people and animals."

HuGo teams also inform residents about the importance of constructing pit latrines and using birth control to prevent a "population explosion around the park," says Tukwasibwe Francis, who has been a member of the HuGo team in Mushorero in Bujengwe, Kayonza sub-county since 1998.

Tukwasibwe says the initiative has not only improved local people's attitudes to gorilla and forest conservation. It has also improved community-based health care and public awareness of good hygiene, disease risks, and family planning, and has promoted better nutrition and sustainable agriculture.

For communities around Bwindi characterised by poverty, high birth rates and food insecurity this is critical. So too is the constant protection HuGo provides to the people's gardens and plantations.

Some HuGo members feel that their efforts should be rewarded. "Government should consider paying us for the vital work we do," says Yosam Ahimbisibwe, a HuGo member in Mukono village, in Mukono parish, Kayonza sub-county. "We have volunteered for so long," he adds.

But HuGo members also benefit from the Accumulated Savings and Credit Associations (ASCA) which they started as teams, and which help them to save money and access loans. For example, Yeremia Tugabirwe - from the HuGo team in Nkwenda village has been able to educate five of his children using loans and his savings in the Mukono Accumulated Savings and Credit Association.

The Uganda Wildlife Authority with support from International Gorilla Conservation Programme, has also provided HuGo members with livestock, but found that some kept the animals well and others didn't.

To address this, CTPH with support from World Wildlife Fund has introduced group livestock income-generating projects. These bring beneficiaries together as a team, enable them to develop more viable livestock enterprises, and encourage them to reinvest profits into Village Saving and Loan Associations. There have been no dropouts in the past eight years, says Dr Zikusoka-Kalema.

Ezema says that in Mgahinga, along the whole of the boundary from Congo border to Rwanda border, "we have built a stone wall which is one and half meters high so it is difficult for the animals to cross."

Having to deal with direct interaction among humans and wildlife, calls for creative wildlife management initiatives to maintain a healthy balance between the parties involved.

Jossy Muhangi, the community relations manager for Uganda Wildlife Authority, says that thanks to these creative initiatives, the use of buffer zones, and discouraging local people from growing crops that will tempt gorillas, there has been a significant reduction in human-wildlife conflicts around Bwindi Impenetrable National Park.

The three reports on conservation of the endangered mountain gorillas in Uganda by Fredrick Mugira were made possible thanks to support from Internews' Earth Journalism Network and the Arcadia Fund.