Transport between Luweero and Nakaseke districts got paralyzed on Monday after irate residents set up barricades across the 30km Luweero-Butalangu Road that links the headquarters of the two districts.

The residents who were protesting against the poor condition of the road, barred travellers from moving along it which prompted Police to move in.

The demonstration inconvenienced hundreds of travellers, including Nakaseke district employees, the majority of whom commute from Luweero to Butalangu where Nakaseke District headquarters are located.

Parliament has approved a $40m loan from the Arab Bank for Economic Development to tarmac the road, but the project is yet to kick off.

"It is everybody's knowledge that the road is soon to be tarmacked. There is no reason why they have taken to the streets," Aharikundira said.

According to the UNRA highway specialist, Moses Ochole, preparations of detailed engineering design and bidding documents have already been completed

Ochole said the proposed project will upgrade the road to a class ‘A' road with a 20-year design life with pavement surfacing. 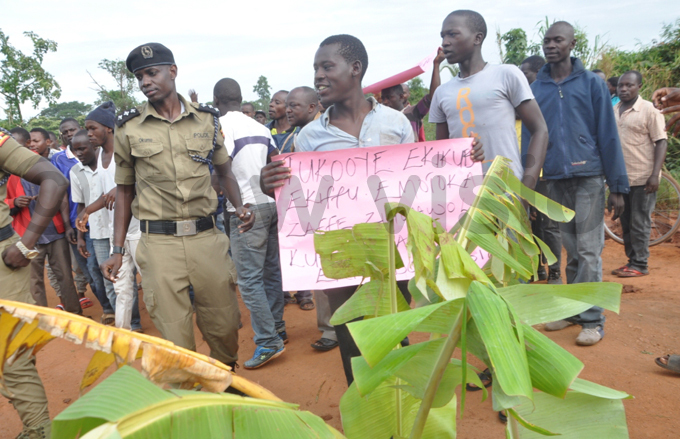 Ochole said government is to foot a sh21b budget to compensate the affected families whose homes are located in 24 villages in Luwero and Nakaseke.

He said a total of 131.29ha of land will be acquired for the implementation of the project.

Nakaseke North MP, Syda Bumba said the upgrading of the gravel road would improve connectivity and spur growth in the region.

She noted that the road leads to important facilities like the missionary founded Kiwoko Hospital and big economic entities like Butalangu Abattoir.

Luweero to Butalangu is a distance of only 30km, but taxi operators charge a staggering 10,000 for a single journey because of the rough road surface.

A football match, a latrine, a mad scramble for tickets

A football match, a latrine, a mad scramble for tickets...