Nigerian president on another medical trip
Next Story

The procedure on Juan Pedro Franco is intended to reduce his weight by half.

The procedure on Juan Pedro Franco is intended to reduce his weight by half.

PIC: Franco arrives at the hospital in Guadalajara, Mexico. (AFP)

The world's heaviest man, who at one point weighed almost 600 kilogrammes (1,300 pounds), has undergone successful gastric bypass surgery, his doctors in Mexico said.

The procedure on Juan Pedro Franco is intended to reduce his weight by half, and is expected to be followed up with another operation, his surgeon Jose Castaneda said Tuesday.

"The surgery was quite successful. But now we have to wait and see how he responds to the (systemic) change. Let's hope everything goes well," Castaneda said.

The procedure has left the patient "quite delicate", and he is being closely monitored, Castaneda said.

Franco, who at his peak tipped the scales at 595 kilogrammes, was told that in order to be eligible for surgery, he had to lose a large amount of his initial bulk. He also had to get his diabetes and blood pressure under control. 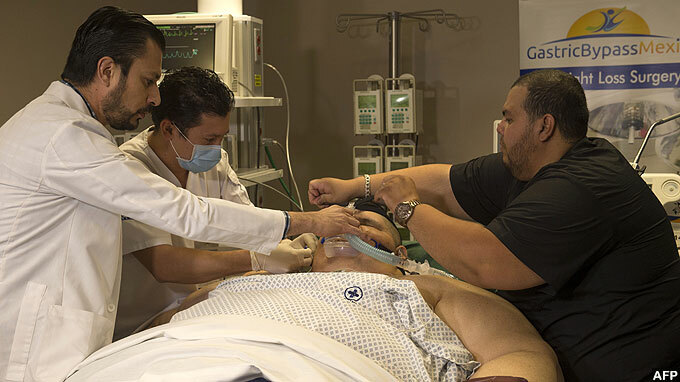 The operation was given the green light when doctors said they were pleased with his steady progress and motivation, which marked a change for Franco, who had spent years in bed.

When the second procedure is done, likely in November, Franco's stomach size will be reduced and his intestines modified.

Most importantly, the patient has to progress on the psychological and nutritional fronts. "If that does not happen, the entire thing will fail," Castaneda warned.

Mexico's Manuel Uribe, who in 2007 held the record for being the world's heaviest man at 597 kilogrammes, died last year.

Doctors said her treatment, which also included a modified diet, helped her lose 323 kilogrammes in three months, to stand at around 177 kilogrammes.