Celebrating midwifery in Uganda
Next Story

Special focus on the youth

Special focus on the youth

The EU is a miracle and a true friend of Uganda, says Schmidt

As the European Union (EU) celebrates 60 years of existence, Ambassador Kristian Schmidt, the EU head of delegation to Uganda in an exclusive interview told Umaru Kashaka and Sidney Miria about the bloc's long-term relations with Uganda, the East African region and how they will carry on even after Brexit\

You have been in Uganda since November 2013 as the EU ambassador. What are some of your enduring impressions of the country?

I would say there are maybe three things that after almost four years that stand out. First of all, of course the people. The combination of the kindness of Ugandans that I have met here, I think that is something that l will remember forever.

This is combined with the resilience in the daily struggle because life is not easy for many Ugandans. That I think is impressive.

Many Europeans if they have never been in Africa and they think of Africa they might think of a continent that is torn by war, bad governance, etcetera, but what they discover when they come here is that they see people and we are all the same human beings trying and struggling.

And I think that is one of my first observations. The second, I would say is the beauty and potential of Uganda as a country. When you travel around Uganda and you see the climate, you see the natural resources it shows potential.

Yeah, you really think there is no reason why this country should be lagging behind neighbours, like Rwanda or Kenya. Thirdly, the strengths of the dialogue that we have with the government and political actors in this country.

We don't always agree, I mean Uganda's government is responsible for Uganda and I represent Europe. We stand on two different sides but the quality of dialogue, even when we don't agree is something that I have really appreciated during my time here. 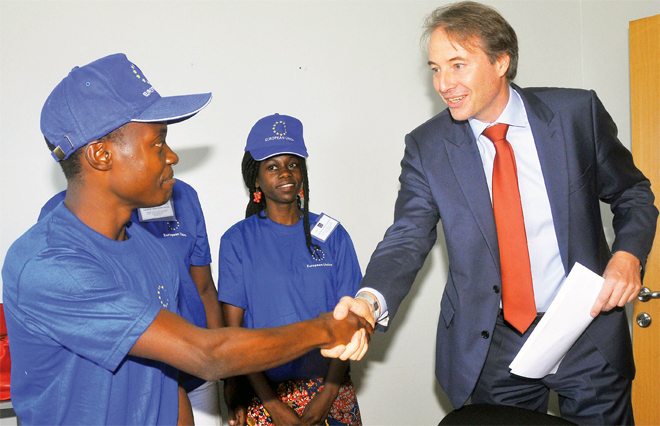 The head of the European Union delegation, Kristian Schmidt right welcoming Najidu Sonko and Salminah Najjuma during an EU meeting with young Ugandans to discuss issues affecting them. This was at the Eu headquarters in Kampala. Photo by W. Sanya

What have the past 60 years of the EU meant for Uganda as a country and the East African region?

I think we have come a long way. If you look back 60 years in our history, Europe was created when there were still colonial ties between Europe and Africa.

That is now a thing of the past. We no longer look at the relationship of supremacy or colonial links. European Union was always founded on the principle of equal partnerships with former colonies, so as an institution we never had any colonial hangover.

For us, it was always about an equal partnership and that I think is what we now see.

Also, as we move from development cooperation towards trade relations and global partnerships some of the issues we now work on with Uganda are global problems that we face together like climate change, security and immigration.

It is not about Europeans coming to help Africans in Uganda, it is about us discussing how we manage together global problems. CLICK HERE FOR MORE ON THIS INTERVIEW

On a Saturday afternoon on November 26, 2016 tensions that had been building over weeks erupted into violence in Kasese town, which is home to the Rwenzururu Kingdom.

Police raided offices of the kingdom in response to attacks on police posts in the region allegedly conducted by the royal guards. Eight royal guards were killed in this raid and two others were arrested.

The following day, the police supported by the army (UPDF) raided the Rwenzururu palace after an ultimatum given to the royal guards to surrender expired. 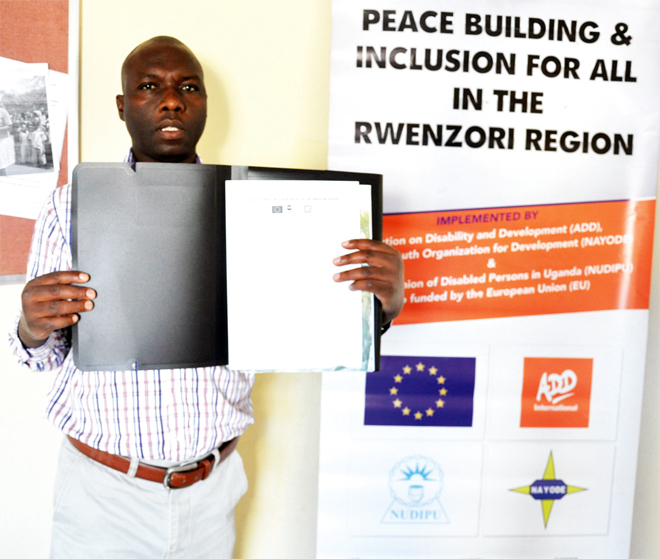 Tumwine says the Rwenzururu kingdom has a long history of conflict

The National Youth Organisation for Development is currently leading a 36-month Peacebuilding and Inclusion project in the Rwenzori region. 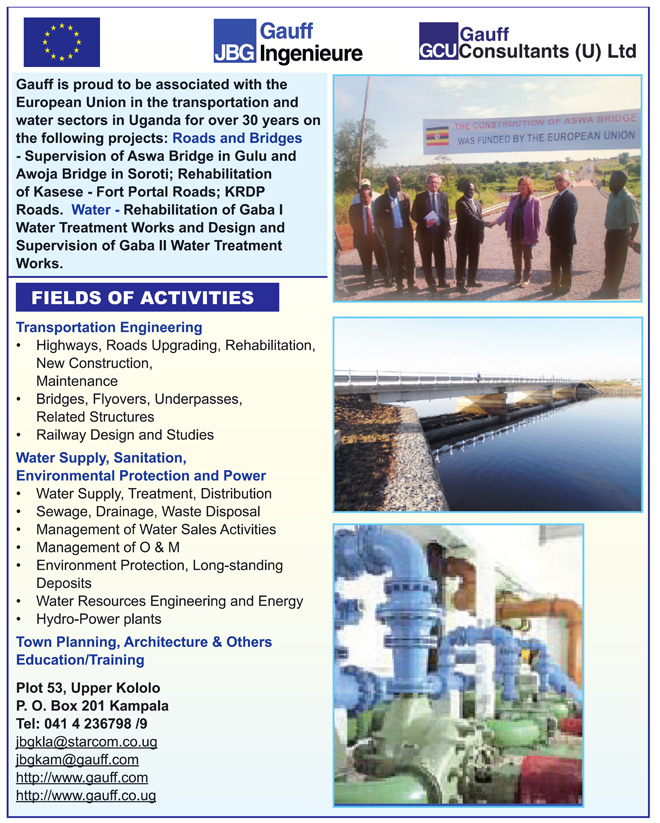 The prolonged drought that hit the country last year did not only affect Ugandans, but it also affected the refugees.

They faced a severe water shortage for both domestic use and their animals. The most affected were those in the refugee settlement areas in the district of Adjumani at Mungula I refugee camp.

This influx of refugees from South Sudan shot up in July last year with the renewal of hostilities between forces loyal to President Salva Kiir and former vice-president Riek Machar.

To support these refugees, a humanitarian agency used to ferry water from River Nile and supply it to the camps.

"Because we are many, sometimes we miss out or get little, according to the 21-yearold Garang who stays with his family in the camp. He helps his mother to collect water from the truck that takes water to the camp.

Their plight captured the First Deputy Prime Minister, Moses Ali's eye, who called on humanitarian agencies to consider water and sanitation as a priority for refuges and host communities.

"We are surrounded by river Nile from Pakwach through Paraa. It turns out ,we have water in the Nile and the only remedy is to carry water to the camp because every camp is about 12 miles from the river," said Ali. 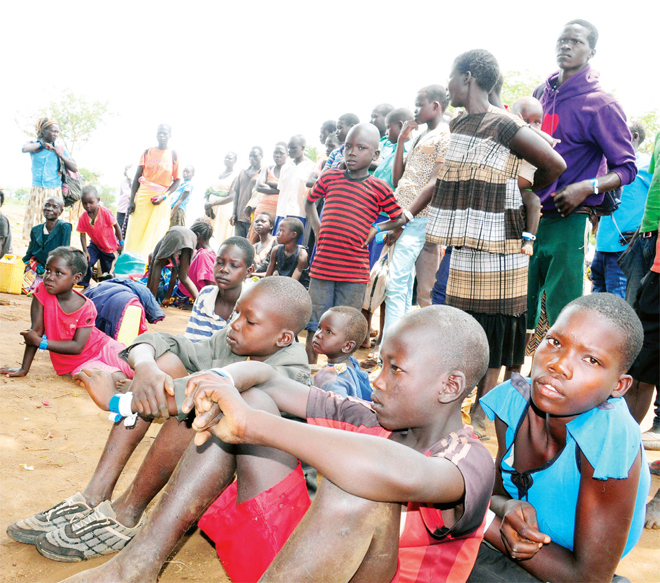 Women and child refugees from South Sudan find it hard to get clean safe water. The EU has set up a €10m fund to cater for water problems among other challenges

His call was answered by the European Union recently who launched the EU Emergency Trust Fund (EUTF), under the Support Programme for Refugee Settlements and Host Communities in Northern Uganda (SPRS-NU), in Adjumani district.

The €10m fund also seeks to address the root causes of destabilisation, forced displacement and irregular migration in the Horn of Africa.

The programme is designed to promote equal economic opportunities, security and development.

While launching the fund at Mungule I refugee settlement in Adjumani in February, the head of co-operation at the EU delegation to Uganda, Michelle Labeeu, said the fund will support all aspects of stability, contribute to better migration management as well as addressing all root causes of destabilisation, forced displacement and irregular immigration in the Horn of Africa. CLICK HERE FOR MORE ON THIS STORY 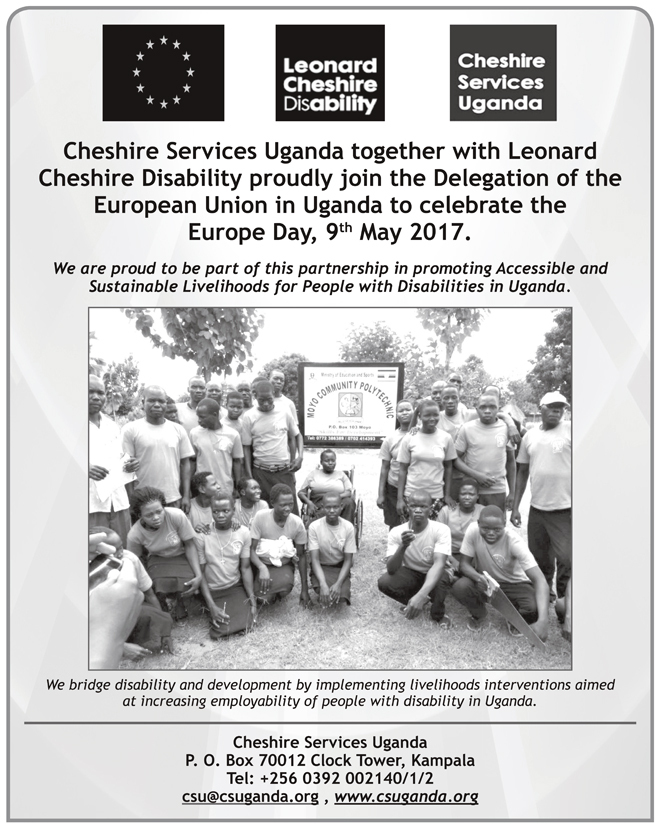