Kampala in British trance
Next Story

Uganda’s forests — and the mountain gorilla’s habitat - have shrunk greatly over recent years.

Uganda’s forests — and the mountain gorilla’s habitat - have shrunk greatly over recent years.

Residents of Rushaga, in Uganda's south-western district of Kisoro, love to eat bananas. But visit and you won't find a single banana plant growing there, even though several locals owned plantations of them in the past. Nor are there any plans to grow them again in the future.

"It would be useless to plant them," says Yoram Tukwasibwe, the chairperson of Rushaga trrading centre.

"Elephants and gorillas from Bwindi National Park eat them before they are ready for humans to enjoy them."

This conflict between the needs of people and animals has multiple roots in poverty, deforestation and climatic change, factors that also threaten to yield other ill outcomes of human-wildlife interactions unless holistic solutions can be implemented.

Rushaga is little known to most Ugandans but, as a gateway to Bwindi Impenetrable National Park, it is well-visited by foreign tourists who flock there to track critically-endangered mountain gorillas (Gorilla beringei beringei).

The park is home to 400 of the last 880 mountain gorillas on Earth. The Rushaga sector hosts 64 of these animals including the Nshongi Group and Mishaya Group, one of Uganda's biggest gorilla families habituated to tourists. 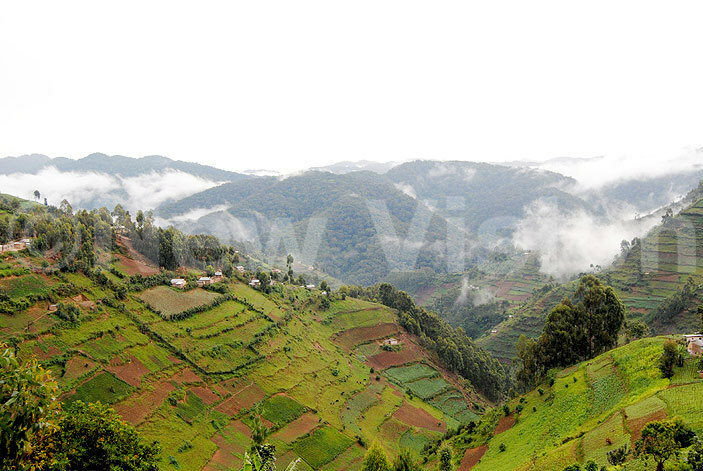 Tukwasibwe, who has lived in this area for over four decades, believes that the frequency of wild animals moving from the park to invade gardens in neighbouring communities has more than tripled in the last decade. So, are our ape cousins just trying to balance their diet? Or, is something leading to a shortage of food in their original habitats?

Jonathan Baranga, a former professor of wildlife at Mbarara University of Science and Technology, thinks climate change is a key factor. He is one of the conservationists who campaigned for the formation of Bwindi Impenetrable National Park, and also worked in the park for over six years.

Kigezi region, where Bwindi Impenetrable National Park is situated, has registered a steady increase in temperatures over recent decades. Research by the African Wildlife Foundation, the International Gorilla Conservation Programme, and EcoAdapt on the Implications of Global Climate Change for Mountain Gorilla Conservation notes that most projections of future climate suggest temperature and rainfall will greatly increase in the 21st century across the Albertine Rift region where mountain gorillas live.

Environmental scientist Jeconeous Musingwire, the National Environmental Management Authority's focal person for the south-western region, says the rise in temperatures is already altering patterns of plant flowering, affecting the habitats and diets of wild animals. Whereas mountain gorillas used to live in a cool micro-climate, he says, these herbivorous apes now have a problem adapting to the changing weather patterns, which affect the plants they eat.

However, Kapere Richard, the Planning Manager and Climate Change Focal Point for the Uganda Wildlife Authority, suggests the story is more complex and that climate change is not directly forcing gorillas to leave the national park in search of food.

"Human-wildlife conflicts might have increased, but not necessarily due to climate change," he says. "Animals in some parks move to community areas to look for mainly water and palatable crops grown near the boundaries. People have occupied forest areas, which used to be occupied by animals and sometimes these animals remember their original routes and they move back to those areas already occupied by the people - hence conflicts."

Uganda's forests — and the mountain gorilla's habitat - have shrunk greatly over recent years. According to the UN Food and Agriculture Organization's Global Forest Resources Assessment 2015, Uganda lost 107,000 hectares of forest per year between 1990 and 2015, an average loss of 3.3% per year. The annual deforestation rate accelerated over that period, from 2% between 1990 and 2000 to 5.5% between 2010 and 2015.

With forests shrinking and the climate changing, says Kapere, people are increasingly entering protected areas to access resources such as handcraft materials, water, poles and firewood for sale and for local use. And this poses new threats to the mountain gorillas, says veterinarian Dr Gladys Kalema-Zikusoka, the founder and chief executive officer of Conservation Through Public Health.

She points out that gorillas and humans share 98 percent of their genetic material, making transmission of diseases between the two species highly probable. "Thus," she says, "the more humans and gorillas interact, the greater the threat of diseases spreading between the two populations."  Such diseases including severe respiratory infections, scabies skin disease and tuberculosis.

According to Dr Zikusoka, two scabies outbreaks in the mountain gorillas were traced to people living around the park. What is more worrying, she says, is that increasing temperatures resulting from global warming create favourable transmission environments for these infections as well as favouring the geographic expansion of some infectious diseases, creating opportunities for clustered disease outbreaks.

The solution, according to the National Environmental Management Authority, lies in ensuring that communities co-exist with Bwindi Impenetrable National Park, looking for alternative livelihoods instead of depleting the forests cover in the park and promoting collaborative management between communities and park management.

As the climate changes, exacerbating old risks and creating new ones for both people and gorillas, this is ever-more urgent.

AGONY: I have fallen in love with my friend

I wouldnâ€™t trade being a stay-home mum for anything