As the Democratic Party's (DP) top organ waits for the investigative report on Buganda region vice president, Betty Nambooze, the party president Norbert Mao is organizing to meet party elders to have the matters discussed.

"I am going to meet elders who matter to have a discussion over this issue. I want every member on board; that's why I want to use all avenues to make sure we do not lose anyone," he said.

"These people are using Buganda for their own interests. They should come and we work together to build the party in unity. It is not right to spend time abusing the party leaders. Are these people really DP? They should stop hunting like hyenas. Do they know what it means to build a credible national candidate to stand for the national Presidency?" he asked.

He stressed that if they really want to make DP great again at they claim, they should instead go to districts like Kalangala, Lyantonde, Sembabule, Mukono, Buikwe and Buvuma among others where DP is still weak, but not Masaka and Kampala.

Over the weekend, the group was blocked by Police from holding a planned meeting in Masaka. 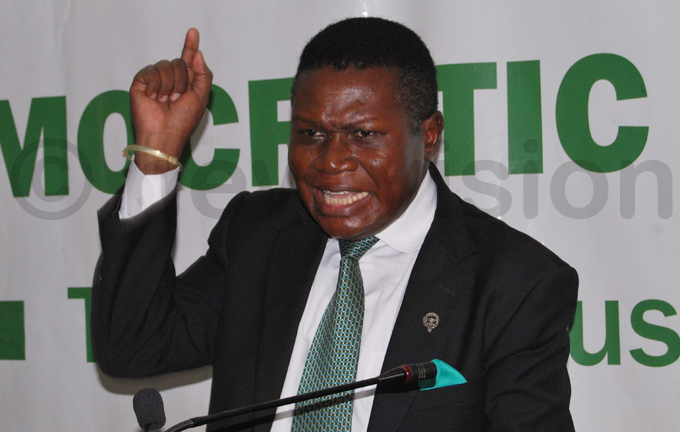 An animated Norbert Mao addressing the media at the party head office in Kampala on Tuesday. Photo by Godiver Asege

This comes a month after Police stopped another conference organized by Nambooze at Nsambya Sharing Hall in Kampala.

"Why would you go to Masaka and Kampala where the party is strong? You can't make Islam or Catholicism greater by going to Mecca or Vatican. That is the same problem we have with the Forum for Democratic Change (FDC) party which instead of going to NRM strongholds, go to Northern Uganda where opposition is already strong," he retorted.

Mao noted that the party has no problem with an MP holding a meeting in his area, but once it is hidden behind DP, then the party has to investigate the agenda.

He clarified that Nambooze was interdicted from his office pending investigations.

He also accused the group of trading sectarianism propaganda by claiming DP belongs to Buganda and NRM belongs to Banyankole.

"I see these things on social media but it is so unfortunate that they can even do this," he noted.