MENU
Serena to resume playing after having baby
Previous Story

The oldest at the championships, the duo competed in three events

Paul Sine in action during the 25m breaststroke race

The oldest at the championships, the duo competed in three events

Peter Ssebanakitta and Collins Matovu displayed a high level of sportsmanship despite their elderly status. At 60, they proved that their mojo in the pool is not yet lost after competing in the  8th USF Masters Swimming Championships Saturday at GEMS Cambridge International School.

The oldest at the championships, the duo competed in three events with Peter Ssebanakitta getting the better of his opposite number.

Such attractions really deem the annual event special and a must watch-image, an old potbellied man in a sport that is virtually youthful.

"There is a lot of fun here. I wish I had signed up to participate in the contest" said 50 year old John Mukasa, one of the spectators. 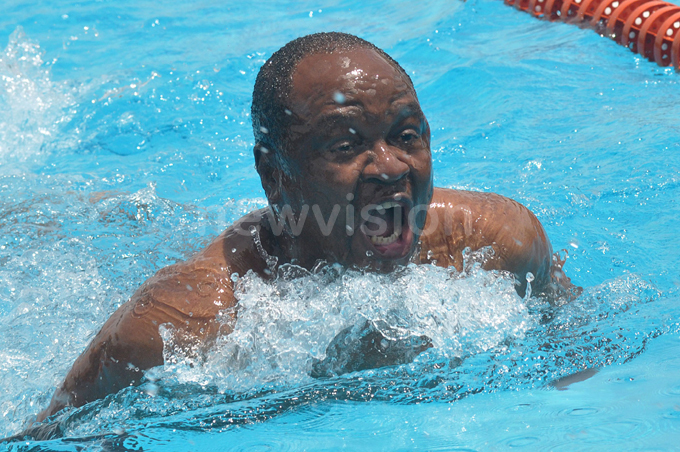 Ssebanakitta clocked 39.16 to beat his counterpart in the 50m freestyle. Matovu weould finish at 56.94.

He (Ssebanakitta) was not about to stop when he for the second time came up big against Matovu in the 25m breaststroke clocking 20.54 before making it three in three in the 50m breaststroke finishing at 47.36 and 59.46 respectively.

The former would later cap his day with a complete solo performance in the 25m freestyle.

Patrick Rukundo from Kampala Acquatic won the 100m freestyle (1:04:41) stemming off competition from Bwambale Ahebwa who came behind him. The 27 year old Rukundo  beat Muwayire Revicalto to the 25m freestyle (12:87). He also took the 200m freestyle.

In the Women's category Kate Kiiza, Caroline Nankabirwa, Sandra Arinaitwe were among the stand outs. Kate was in a repeat of last year's scintillating performance in the same event.

The annual event is organized by the Uganda Swimming Federation.​