NARO encourages use of cooking oil into bi...
Next Story

“The groundwork has been laid with the creation of this Commission by the President. We shall give Mapeera Bakateyamba's home recommendations to all government departments so that they can be supported,” She promised.

“The groundwork has been laid with the creation of this Commission by the President. We shall give Mapeera Bakateyamba's home recommendations to all government departments so that they can be supported,” She promised.

The Government is committed to supporting Person with disabilities (PWDs) and the elderly of Mapeera Bakateyamba's home, Equal Opportunity Commission Chairman Sylvia Muwebwa Ntambi has said.

"The groundwork has been laid with the creation of this Commission by the President. We shall give Mapeera Bakateyamba's home recommendations to all government departments so that they can be supported," She promised. 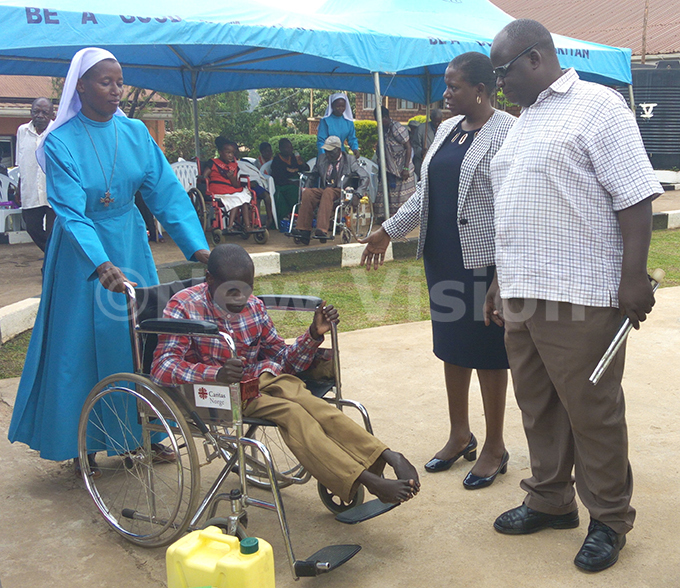 Sister Mildred Abitegeka helps one of the patients with disability, as the Equal Opportunity Commission Chairman Sylvia Muwebwa Ntambi and his commissioner Julius Kamya look on

She made the promise over the weekend, as EOC staffs donated foodstuffs and clothing to the elderly, PWDs and children with disability disciples at Mapeera Bakateyamba's home in the city suburbs of Nalukolongo.

EOC is a statutory agency mandated to deal with acts of discrimination and marginalisation.

Muwebwa disclosed that the diocese gets sh2m from the Catholic Church, which she said is not enough to take care of over 150 PWDs and the elderly.

According to Muwebwa, their visit at the home was prompted by the commission's mandate of eliminating discrimination and marginalization across the country. "We are here today because part of our population  are discriminated and marginalized".

She revealed that the Commission's aim was to dialogue with the disadvantaged people so that they can find out their challenges and plan how to address them for elusive development to be achieved.

"We came here to find out those people's challenges, how they are discriminated and share with the sisters as we help them to feed, bath and clean the place in order to show that we are with them in Christ," Muwebwa said.

She urged more companies to contribute for the vulnerable persons in the society and thanked the diocese for their continued support for persons with disabilities.

Bakateyamba is a place for the disabled, elderly, poor and vulnerable persons. The home, which was established by the late cardinal Wamala Nsubuga, is found in Nalukolongo, 4km on the old Masaka Road in Rubaga division.

Sister Mildred Abitegeka, the assistant home administrator disclosed that the disadvantaged, mainly the elderly with complications need services of a bigger hospital which is expensive, and hence do not get medication on time.

She said they are worried of land grabbers; since they depend on agriculture. "The Mukono land for the Good Samaritan may one day be grabbed by land grabbers and we shall be stopped from digging".

Abitegeka said they also experience a challenge of feeding and paying utility bills like water and electricity. "During dry spell normally the bill doubles which means the diocese has to contribute to the amount of money paid by one of our Muslim donors.

Describing people they look after, Abitegeka revealed that they look after people who are bedridden, cannot feed themselves, speak and the blind. She adds that they do not only look after Ugandans but also people from Rwanda, Kenya, Burundi and Sudan.

100-year old John Lasu, who has spent 17 years at Bakateyamba's home, thanked the diocese for helping them. Lasu, a Sudanese national said he escaped from his country due to internal conflicts and found himself in Jinja.

"While in Jinja, my leg got paralysed and I was offered a wheel chair and later brought to Kampala," He narrated his ordeal.

I feel pain when having sex

I feel pain when having sex

Why do I feel pain during sex?