What is Easter Monday all about?
Next Story

If Agnes Napiyo is interdicted, she will be earning half pay of her monthly salary until she is cleared.

If Agnes Napiyo is interdicted, she will be earning half pay of her monthly salary until she is cleared.

PIC: Magistrate Agnes Apiyo at the Anti-Corruption Court after she was granted bail. (Credit: Eddie Ssejjoba)

KAMPALA - The Judiciary is set to interdict the embattled Nakawa Court grade two Magistrate Agnes Napiyo who is battling corruption charges at the Anti-Corruption Court in Kampala.

Speaking to New Vision, the judiciary senior communication officer Solomon Muyita said once criminal proceedings are instituted against any judicial officer, he/she must step aside pending final determination of the case.

"At the moment, criminal charges have already been instituted against her. The government standing orders require that she steps aside," he noted.

Muyita said once the Chief Registrar of the Courts of Judicature, Paul Gadenya, receives the formal complaint against her from Nakawa Court deputy registrar, she will be interdicted.

"Sections (8) and 25 (2) of the Public Service Standing Orders and Judicial Service Regulations, 2005 empower the Chief Registrar of Courts of Judicature to interdict any judicial officer over misconduct allegations pending further investigations of the complaints. I am sure she is going to be interdicted anytime," he said.

If Napiyo is interdicted, she will be earning half her monthly salary until she is cleared. 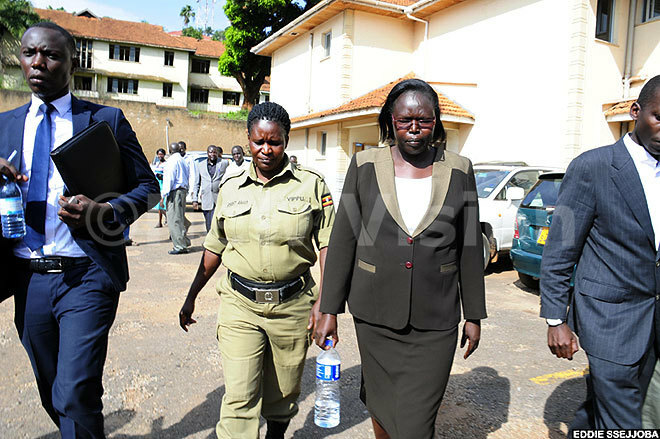 Muyita revealed that by the time Napiyo allegedly committed the offence, she had been transferred to Mukono Chief Magistrate's Court.

"She had no pending cases at Nakawa Court because she was in transmission exercise to her new station and no case would be affected because of her interdiction."

Muyita explained that although Napiyo is a grade two magistrate who has been phased out by government, she had not yet reached the 60-year retirement age.

"Phasing out grade two magistrates is a gradual process. All of them must finish their retirement age of 60 years unless otherwise and then replaced by grade one magistrates," he said.

Muyita said if Napiyo is convicted of the offence, chances are that she would completely lose her job before the retirement age.

On Tuesday, Napiyo was arraigned before the Anti-Corruption Court and charged with two counts of corruption.

She denied the offences and was released on a sh500,000 cash bail by Grade One magistrate Patricia Amako.

It is alleged that between March 2 and April 8, at Nakawa Chief Magistrate's Court in Kampala, Napiyo solicited sh1m from a one Aman Vicent Egesa, as an inducement to reverse a child custody ruling in his favour.

It is further alleged that on April 8, while at Bonjour Supermarket, Total fuel station in Nakawa division, Napiyo received the bribe from Egesa.

Napiyo is alleged to have approached Egesa who has been battling his estranged wife for custody of their children and told him that custody had already been given to the wife but it would be reversed if he paid sh1m to her.

However, Egesa sought the IGG’s intervention and she was trapped.

Egesa was given pre-recorded bank notes which he handed to Napiyo in the presence of detectives who later arrested her.