We are not losing hope on Kagezi murder - DPP

"When investigations take long, the plot gets colder. However, it does not mean that we are giving up."

"When investigations take long, the plot gets colder. However, it does not mean that we are giving up."

KAMPALA - The Director of Public Prosecution (DPP), Mike Chibita has said that despite the delays in finding the killers of the late state prosecutor Joan Kagezi, they are not giving up on the investigations.

"It's now two years and we have not got any suspect yet. When investigations take long, the plot gets colder. However, it does not mean that we are giving up. We shall continue with the investigations until the killers are nabbed," he said.

Without giving details, he said they have so far got leads in the case and will use then to further the investigations.

Chibita noted that the reason investigations into the gruesome murder of Kagezi have delayed is because the prosecution is very weak and with limited expertise to investigate such a complex matter.

He was speaking during the 2nd Joan Kagezi Memorial Lecture held in Kampala.

The resident legal advisor of the United States Department of Justice, William Narus was the guest speaker. Narus worked closely with the deceased on the July 2010 bomb case.

Apart from the bomb case, Kagezi was also handling the Thomas Kwoyelo case whose trial is yet to start. According to Chibita, other cases that were under her docket have been committed to the High Court while others are still under perusal.

He said that the memorial lecture is held annually to remind prosecutors that they have to stay focused and complete the fight that Kagezi started.

The lecture was held under the theme; 'Addressing challenges in the investigation and prosecution of cases of sexual violence in conflict situations'.

Chibita said that the theme was chosen because sexual and gender-based violence were close to the heart of the late prosecutor.

"Her other passion was gender and sexual violence. She even partnered with the Embassy of Sweden to conduct seminars here and abroad around the subject," he said. 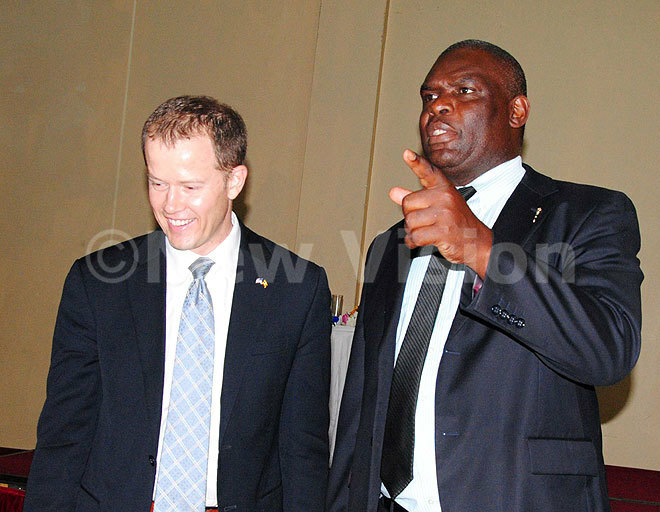 Here, Chibita interacts with William Narus from the US Justice Department during the memorial lecture. (Credit: Mary Kansiime)

Narus, in his presentation on challenges of investigating and prosecuting sexual violence cases, noted that these cases are complex, they are heart wrenching, not easy, the evidence is challenging and the case is extra-ordinarily difficult.

He stated that the major challenges prosecutors face during investigations and prosecution is that the victims are fearful of their tormentors and cannot come out to speak against them, they are traumatized and wish not to think about the whole incident and want to move on.

Other challenges he mentioned include; victim's fear of being ostracized by the community, lack of accurate and appropriately done documentations on the case by expert investigators, lack of forensic evidence and unwillingness by the accused to give a statement on the matter.

"As we try to seek justice for the victims, we cannot re-victimize the victims in the trial process. We must spend time to ensure that the victims get the support they desire. The support must include psychological to assist the victim overcome the trauma that s/he has undergone," Narus said.

He said victims should not only be accorded economic support but also given the opportunity to earn a living for them and the children they got through rape or forced pregnancies.

He stated that there is also need to educate communities on sexual violence such that the ostracisation of victims is stopped.

There is need to protect the victims by preventing the media from publishing their identities and disguising or blurring their identity during trial, added the American.

Narus noted that state prosecutors need to be patient with the victims and turn into their confidantes if they are to be successful in prosecuting the cases.

In her remarks, Annet bada, a senior legal counsel from FIDA Uganda noted that the most difficult sexual offences to investigate are those that happen during war where the victim cannot easily identify their perpetrators.

Dr. Sylvester Onzivua, a government pathologist, stated that though forensic evidence is key in prosecuting sexual offences, there are only four experts in the country and that forensic services are not streamlined.

"The quality of forensic investigations in the country is pathetic."

Before her death, Kagezi was the head of the International War Crimes Division and the DPP's war crimes and anti-terrorism division. She was gunned down on March 30, 2015 by unknown assailants. To date, no suspect has been arrested.

The Swedish ambassador to Uganda Per Lindgarde praised her relentless efforts at fighting terrorism and organized crimes and facilitating the establishment of a strong legal framework.

How Vision Group attracted Ugandans back to the garden

Grab business opportunities in the Netherlands