Students surround the Dean of Students, Joseph Joe Orokode, during negotiations for the Vice Chancellor’s release. Photo by Charles Achoda

Students of Kumi University on Monday held the institution's Vice Chancellor (VC) hostage over what they describe as poor management and administration.

The bus was acquired by the university only recently.

The angry students held Dr. Young Gil Lee in his office from morning till 8pm when the Kumi Resident District Commissioner (RDC), Joseph Okwakol and his deputy Eric Sakwa intervened.

Okwakol held a meeting with Lee and later pleaded with the students to free the VC.

The incident was spurred by Lee's refusal to use the university's bus to go for a football match that was to be played about 7kms away.

According to the university's guild president, Nicholas Wako, the students went for a football match in Kumi town but were forced to return on foot when the VC declined usage of the bus.

"Students paid money for the purchase of that bus but we don't know why our VC is refusing. Let him also buy his own" a student was heard saying. 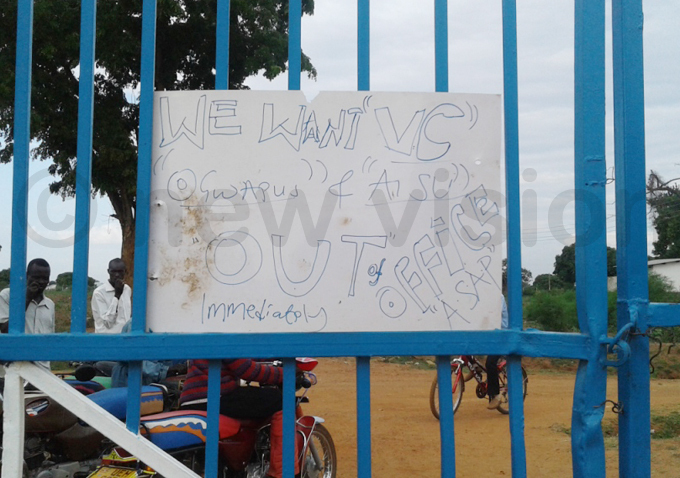 When Sakwa convened a joint meeting on Tuesday, students demanded that Ogwapus be removed from the office immediately. Students accused him of allegedly sitting on their requests and not approving them.

Sakwa urged the angry students to calm down as their grievances are being considered. He also accused the university's top management of failing to pay attention to the concerns of the students.

On the issue of the bus, Aisu said that students were denied the bus because the VC was not formally contacted over the matter.

"I think there was a problem in communication. The VC was not informed and was not aware," an apologetic Aisu said.