Sweden arrests man for 'terrorist crime' a...
Next Story

US threatens further strikes in Syria

The United States warned Friday it is ready to hit Syria again after a missile strike that infuriated Moscow and fueled calls for a push to end the six-year war.

US Ambassador Nikki Haley delivered the warning at an emergency session of the UN Security Council called after the US strikes, which were launched to punish an alleged chemical weapons attack by Bashar al-Assad's regime.

"The United States took a very measured step last night," Haley told the council. "We are prepared to do more, but we hope it will not be necessary."

Haley said the strike destroyed an air field from which Washington believes Damascus launched the attack on rebel-held Khan Sheikhun, where 86 people including 27 children died this week.

Rights monitors warned, however, that Syrian jets were already flying sorties from the base again as night fell Friday.

The United States fired 59 Tomahawk cruise missiles from warships in the Mediterranean at the Shayrat airfield near Homs in central Syria.

Assad's office called the strike "foolish and irresponsible," and Moscow announced a series of retaliatory steps including plans to strengthen Syrian air defenses.

"The United States will no longer wait for Assad to use chemical weapons without any consequences," Haley said. "Those days are over."

The United States did not seek UN Security Council authorization for the military action that followed days of global outrage at images of dead children from the suspected sarin gas attack.

It was Trump's biggest military decision since taking office and marked a dramatic escalation in American involvement in Syria's protracted war.

"The United States attacked the territory of sovereign Syria," Russian Deputy Ambassador Vladimir Safronkov told the council, denouncing a "flagrant violation of international law and an act of aggression." 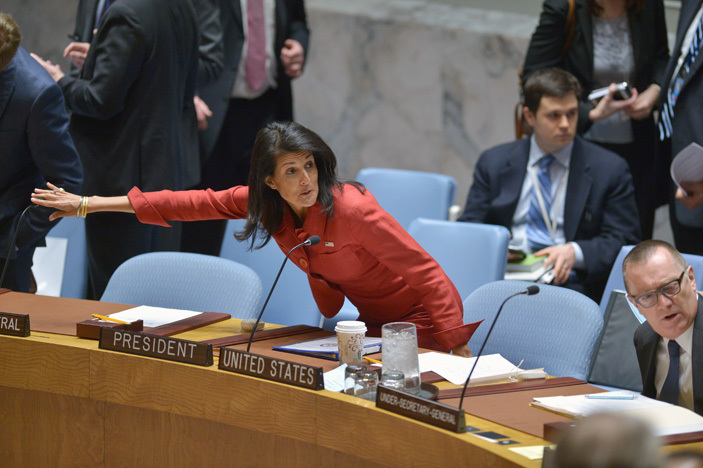 US Ambassador to the UN and current UN Security Council president, Nikki Haley arrives for a United Nations Security Council meeting on Syria, at the UN headquarters in New York on April 7, 2017. / AFP Photo / Jewel Samad

US Secretary of State Rex Tillerson, in Florida to attend a summit between Trump and China's Xi Jinping, is due in Moscow next week for talks with President Vladimir Putin.

"I'm disappointed in that response from the Russians because it indicates their continued support for the Assad regime," said Tillerson.

"In particular," he said, the response showed the Kremlin's "continued support for a regime that carries out these kinds of horrendous attacks on their own people.

"I find it very disappointing but -- sadly, I have to tell you -- not all that surprising."

In Washington, a senior US official said Syria may have had help carrying out the alleged chemical attack, but stopped short of accusing Russia of complicity.

"We are carefully assessing any information that would implicate the Russians knew or assisted with this capability," he said.

While threatening further strikes, Haley also said it was time to press on with diplomatic efforts to achieve a political solution to end the war.

UN Secretary General Antonio Guterres urged restraint and a renewed push for peace in Syria, saying "there is no other way to solve the conflict than through a political solution."

The Kremlin warned the US military action would inflict "considerable damage" on US-Russia ties.

It immediately suspended a deal with the United States aimed at avoiding clashes in Syrian airspace, though the foreign ministry did not scrap Tillerson's visit.

Trump announced the strike in a brief televised address.

"Tonight I call on all civilized nations to join us in seeking to end this slaughter and bloodshed in Syria and also to end terrorism of all kinds and all types," he said.

Fired from the USS Porter and the USS Ross, the cruise missiles targeted radars, aircraft, air defense systems and other logistical components.

The Syrian Observatory said the US strike on the base killed eight Syrian military staff, including an army doctor. Syria's army had earlier said six people were killed in the strike, without specifying if they were military personnel or civilians.

Russia's military said the strike had an "extremely low" military impact, with fewer than half the missiles reaching the base.

It destroyed six planes under repair and several buildings, including a storage depot and radio station, it said.

US officials said Russia's military in Syria was informed of the strike beforehand in order to avoid casualties.

Russia has stood by Damascus despite the global uproar, insisting the chemical weapons that caused the deaths in Khan Sheikhun had been stockpiled by "terrorists" and possibly released by a conventional strike.

In the blighted town itself, residents mourning their dead welcomed the US strike as a way to pressure Damascus.

"God willing, these strikes will be a clear warning to Bashar al-Assad, to tell him: Bashar, enough killing and injustice against these people," said Abu Ali, a man in his 40s.

Opposition and rebel fighters, who have for years urged more direct US military action in support of their uprising, hailed the strike and called for more.