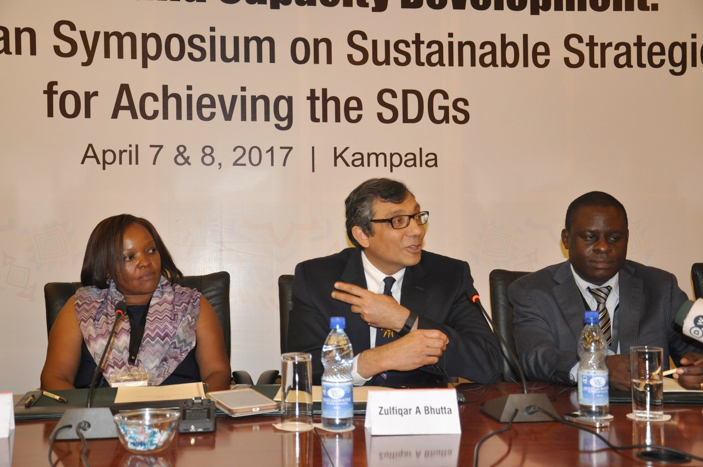 Health experts are meeting in Kampala, Uganda, to determine how to improve the lives of mothers and children in East Africa as global attention and resources are being focused on the Sustainable Development Goals (SDGs) over the next 15 years.

The two-day symposium that brings together healthcare providers, programmers, academic institutions and researchers has been organised by the Aga Khan University's Center of Excellence in Women and Child Health (CoE WCH), and School of Nursing and Midwifery (SONAM) in East Africa in partnership with Makerere University's Maternal and Newborn Centre of Excellence, The Coalition of Centres in Global Child Health, and the SickKids Centre for Global Child Health in Toronto, Canada.

Dr. Sabiiti said efficient and sustainable solutions to SDGs cutting across local and national boundaries will only be realised if governments, businesses, civil society and academic institutions worked together.

"It is very commendable of AKU and Makerere University to organise this symposium because it shows that stakeholders are beginning to take ownership of the SDGs which is very critical for success," she said.

Dr. Sabiiti further said "the Government of Uganda is committed to playing its role with regard to the SDGs as a priority because it was selected as a second wave Global Financing Facility country. With this, we revitalized a process which begun in 2013 around the development of a "sharpened Reproductive Maternal Newborn Child and Adolescent Health (RMNCAH) plan."

Uganda is also working with eight other countries (Bangladesh, Cote d'Ivoire, Ethiopia, Ghana, India, Malawi, Nigeria, and Tanzania) to reduce preventable deaths of pregnant women and newborns in their health facilities by half within the next 5 years, she disclosed.

The founding Director of the CoE WCH Professor Zulfiqar Bhutta, underscored the importance of developing indicators that would help track progress in achieving the SDGs.

"There is need to set up a national steering committee to review the pace of efforts to achieve the SDGs and to ensure that all stakeholders are held accountable," he said. Maternal and child mortality has been reduced by half in East Africa but the burden is still huge, he added.

Improving the health of women and children around the World is a top priority for the international community as evidenced by the inclusion of specific health targets in the SDGs.

Dr. Wilson Were, Director RMNCAH Program at the World Health Organisation, said "whilst a lot has been learnt under the MDGs, there is urgent need for increased investments in the health sector if the SDGs are to be realised".

"Stakeholders also need to share strategies and capacity to support the broader SDGs agenda with more focus on youth, adolescents and vulnerable groups," he said.

SDG 3 seeks to ensure health and well-being for all, at every stage of life. The aim is to improve reproductive, maternal and child health; end the epidemics of HIV/AIDS, malaria, tuberculosis and neglected tropical diseases; reduce non-communicable and environmental diseases; achieve universal health coverage; and ensure universal access to safe, affordable and effective medicines and vaccines.

According to Dr. Peter Waiswa, Associate Professor at Makerere University, East African countries must not only prioritise maternal, newborn and child health, but also have a regional strategy to achieve the targets to reduce deaths and disabilities while ensuring survival and well-being is at the center of implementation of the SDGs.

"An area long neglected is neonatal health and stillbirths. Countries need systems to count these and account for each loss. The low hanging fruits  for East Africa in the area  of maternal, newborn and child health seems to be improving efficiency of systems through smart governance, financing and accountability; integrated implementation, improving quality of care along the continuum of maternal, newborn and child health; scaling up family planning services and nutrition," he said.

The symposium is the first of three to be held in East Africa. The other two will be held in Tanzania and Kenya respectively.