Casualties reported in Saint Petersburg me...
Next Story

Russia's Investigative Committee say it is probing an "act of terror" but add it will look into all other possible causes of the blast.

Russia's Investigative Committee say it is probing an "act of terror" but add it will look into all other possible causes of the blast.

Eleven people were killed and dozens more injured as an explosion rocked the Saint Petersburg metro Monday, with the Kremlin saying it bore "all the hallmarks of an attack."

Authorities shut down the metro system in Russia's second city for several hours as security services said they had also defused a bomb at a second metro station.

Russia's Investigative Committee said it was probing an "act of terror" but added it would look into all other possible causes of the blast.

There was no immediate claim of responsibility for the explosion, which comes after the Islamic State group called for attacks on Russia in retribution for its military intervention in Syria fighting against the jihadists. 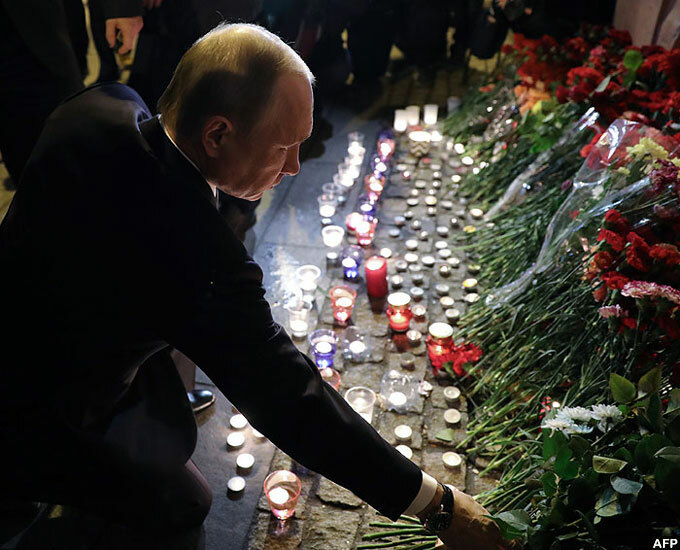 Pictures screened on national television showed the door of a train carriage blown out, as bloodied bodies lay strewn on a station platform.

Above ground, emergency services vehicles rushed to the scene at the Technological Institute metro station, a key transport hub in the city centre.

As the city prepared to mark three days of mourning, President Vladimir Putin placed a bouquet of red flowers at the entrance to the station in the late evening hours, after chairing a meeting of officials from the FSB intelligence agency, rescuers and the interior ministry.

Anti-terror authorities said in a statement to Russian news agencies that the toll had risen to 11 dead and 45 injured.

"I will be afraid to take the metro now," said Maria Ilyina, 30, standing near the station, where a growing pile of flowers has been left in tribute to the victims.

"Before we thought that this would not come to Saint Petersburg -- now our city is under threat." Pensioner Vyacheslav Veselov told AFP he had seen four bodies at the station.

"A station attendant in tears called on the men to help carry the bodies," he said.

The blast occurred in a train carriage as it was travelling between the Technological Institute and Vosstaniya Square stations at 2:40 pm (1140 GMT), said anti-terrorist committee (NAK) spokesman Andrei Przhezdomsky.

The NAK committee later confirmed security services had found another explosive device at the Vosstaniya Square metro station. This device did not explode and was immediately "neutralised."

The Moscow metro tweeted that it was "taking additional security measures" as required by law in such situations, while NAK said in a statement carried by Russian news agencies that security was being stepped up at transportation hubs and crowded spots across the country.

Putin, who had been in Saint Petersburg holding a meeting at his Strelna presidential palace, offered "condolences" to the wounded and to the loved ones of those killed. 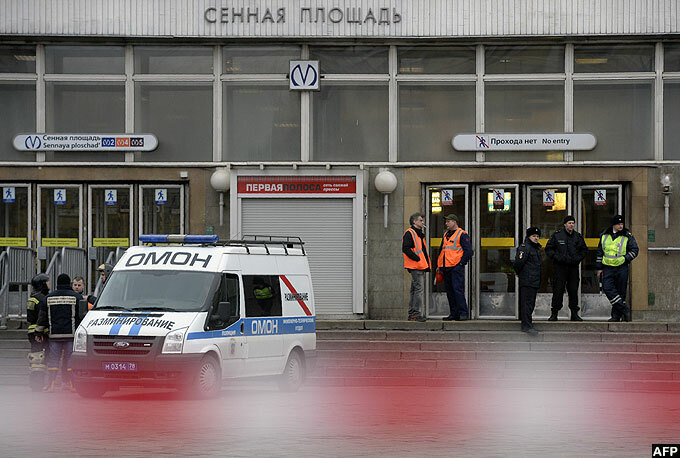 German Chancellor Angela Merkel condemned the explosion as a "barbaric act," while US President Donald Trump said: "Happening all over the world, absolutely a terrible thing."

Kremlin spokesman Dmitry Peskov said Moscow and Washington had been in contact over the blast "through diplomatic channels."

EU foreign policy chief Federica Mogherini wrote on Twitter that she was following developments "together with all EU foreign ministers" gathered for a meeting in Luxembourg.

"Our thoughts are with all the people of Russia," she wrote.

Russia has not been hit by an apparent attack this deadly since the bombing of a plane carrying holidaymakers back to Saint Petersburg from the Egyptian resort of Sharm el-Sheikh in October 2015, which was claimed by IS. All 224 people onboard were killed.

Russian ground transport has also been hit by extremists before.

In 2013, twin suicide strikes within two days at the main railway station and a trolleybus in the southern city of Volgograd -- formerly known as Stalingrad -- claimed 34 lives and raised alarm over security at the Sochi Winter Olympic Games.

A suicide raid on Moscow's Domodedovo airport claimed by Islamic insurgents from the North Caucasus killed 37 people in January 2011.