Rakai forests smuggled out of Uganda

According to residents of Kyebe, Minziiro, Kasensero, Nangoma and Sango bay villages, the trucks often go through secret border points into Tanzania.

According to residents of Kyebe, Minziiro, Kasensero, Nangoma and Sango bay villages, the trucks often go through secret border points into Tanzania.

At least ​three​ fuso trucks laden with timber and logs leave the Malabigambo forest every night.

According to residents of Kyebe, Minziiro, Kasensero, Nangoma and Sango bay villages, the trucks often go through secret border points into Tanzania and other unknown destination.

This is attributed to weak operations, corruption and the presence of highly concealed ungazzetted border points in these villages.

He says smugglers are always mobile and operate deep within in the forests where authorities and informants can hardly track them.

"Illegal lumber jacks use chainsaw machines to cut huge trees in the middle of the forests. They always wield pangas, axes, clubs or bows and arrows to defend themselves in case law enforcement officers round them up," he added.

Angello Matovu, the Kigazi-Minziiro LC1chairperson, told New Vision that Minziiro and Namalala forests reserves have been encroached on and degraded for over five years, leaving great damage.

He explains that between three and four fuso trucks would ferry timber and mainly those used as electric poles from Namalala into Tanzania every day. 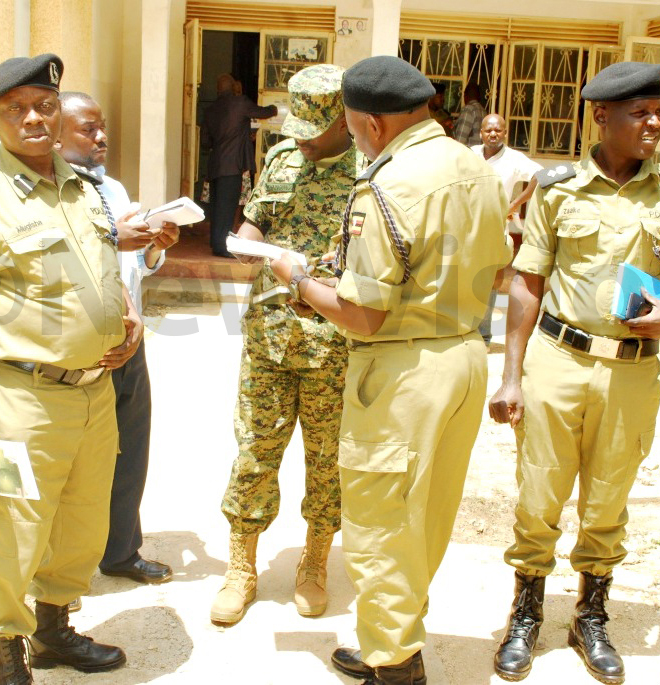 Members of the forest protection taskforce

Michael Mugisa, the National Forestry Authority (NFA) Executive Director, ​attributes the extensive deforestation and forest degradation in the district to the high demand for timber, logs, firewood, and land for cultivation.

He says pastoralists, herbalists, charcoal burners, farmers and timber or log smugglers are the common actors in forest depletion.

Mugisa further says NFA, the Government and district officials are often cited in all sorts of illegal forest practices.

According to Mugisa, the forests were once thick and impenetrable, but gradually, they have reduced in size due to uncontrolled tree cutting.

Jamiru Kiyingi, the District Natural Resources Officer, told the New Vision that several hectares of Sango bay, Minziiro, Namalala and Malabigambo forest reserves have been eaten away for economic activities. 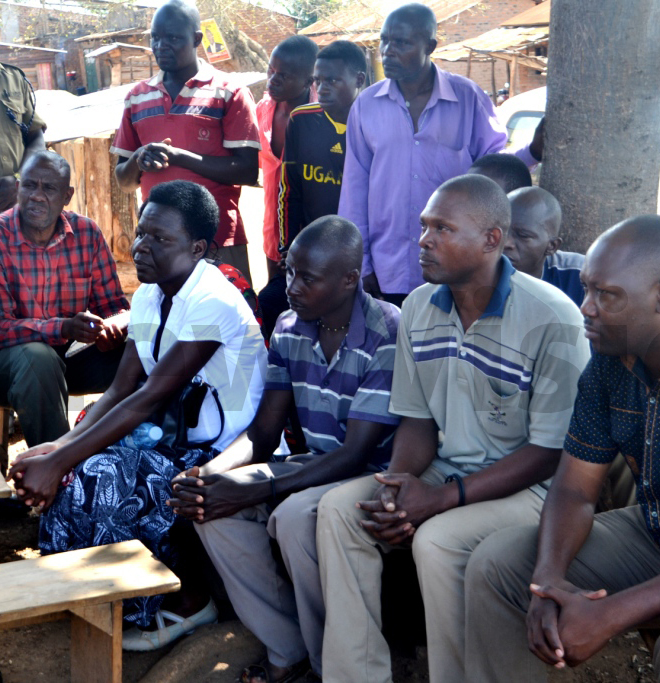 He adds that some natural tree species such as mahogany and muvule take long to grow and reach full size. He said they may take between 20-30 years or more." Kiyingi explained.

He adds that others may grow a bit faster between 5 to 15 years. Much as it's possible to replace the trees, Kiyingi says they may take many years to grow.

According to Uganda Bureau of Statistics (UBOS) National Population and Housing Census 2014, Rakai has a population of 513,008 people living in communities surrounding the Lake Victoria basin.

As a result, there's increasing pressure on the natural resources, which leads to deforestation, charcoal burning, wetland depletion, poor fishing methods and large stretches of land are water-stressed. Kyangungu of the UPDF Forest and environment restoration unit

Impact on the Environment

Dr. Geoffrey Kiwanuka Kimbugwe, who heads the Production Department in the district, says the forests, which would support the environment are cut down for economic reasons.

Kimbugwe adds that in extreme circumstances, crops wither, wells dry and livestock die. He says agricultural yields, meat and milk production that would be taxed, have reduce drastically.

In 2016, the district was hit hard by drought, which affected crop production and there was widespread hunger. Authorities were forced to declare a state of emergency attracting food relief from humanitarian organizations and the Office of the Prime Minister for the most affected communities.

Charles Mubiru, the Resident District Commander (RDC) and the District Security Committee were forced to ban charcoal burning and ordered the Police to arrest all people who violate the directive.

Sangobay Range Manager Ruben Arinaitwe, said they have taken all measures to end the crimes, but they have also met stiff resistance and threats from the encroachers.

Azikiwe Magenge, an Environmentalist in Kyebe sub-county, says the uncontrolled forest encroachment has forced wild animals such as elephants, buffalos, monkeys, and others to stray into the people's gardens where they wreak havoc.

At least over 2,000 acres of wetlands and forests were encroached in 2016. 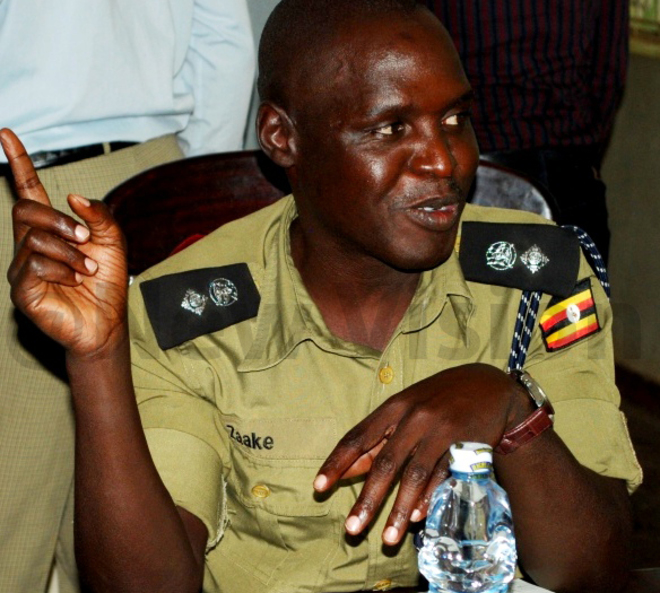 Latif Zaake, the Regional Police Commander, a member of the taskforce

The forests provide potential eco-tourism, which attracts domestic and international tourists who contribute to the district income.

Bukenya Kasozi, the Deputy Chief Administrative Officer (CAO), explains that a lot of income is lost to smuggling and charcoal burning among others.

He says authorised log and timber businesses are taxed and largely contribute to the district's development.

Rakai LC5 Chairperson Robert Benon Mugabi says the district always fails to realize the prospected revenue every year due to the rampant smuggling of district resources.

As a result, Mugabi adds, the district finds itself incapable of doing road maintenance, garbage collection, and installation of street lights, buy cemetery land plus other services.

Rakai district local government is financed by grants (Conditional and Unconditional) from the Central Government and development partners and the locally generated revenue in form of taxes, licenses and charges.

In the 2015/2016 Budget, government allocated sh2.2 trillion for the Local Government ministry. But according to civil society groups, the money was considered low compared to the number of districts and workload local governments have.

According to the Local Government Act Cap 243, all the money collected as local revenue is kept in the district treasury.

NFA, Environment police and the Army deployed several officers recently to guard Minziiro forest and other areas to deter the crimes.

But according to NFA's Mugisa, they are still facing a challenge of limited personnel, which creates room for smugglers and encroachers to elude enforcement officers.

A senior UPDF officer, only identified as Kyangungu, told residents of Minziiro to expect tough operations against encroachers and timber smugglers.

Willy Panuha, the Southern Region Environment Police Officer, appealed to residents to report officers who are engaged in environment crimes for the law to catch up with them.

Latif Zaake, the Regional Police Commander, proposed an idea of regional task forces and impromptu operations as one of the mechanism to reduce forest crimes.

In 2016, NFA officials in collaboration with residents and the Police arrested Kim Kabiito, the Minziiro LC1 Chairperson, for illegal lumbering in Malabigambo and Namalala forests.

Kabiito admitted to having secretly lumbered and smuggled logs and timber for two years.

Also two suspects; Christopher Tumushabe and Frank Ssendegeya were arrested for clearing a portion of more than four acres of the forest reserve in Kyebe.

According to Maurice Niyonzima, the head of the Mutukula border police, they have intercepted several trucks trying to smuggle timber into Tanzania.

He explained they have done several operations with Uganda Revenue Authority and NFA in which they have impounded several trucks with illegal timber.

Niyonzima said the suspects are usually arrested and prosecuted at Nakawa court.

However, environmentalists claim that in the last 16 years, Uganda has lost an estimated over 160,000 hectares of wetlands to encroachers, which have not been reclaimed yet.

What the future holds

Without identifying and closing ungazzated open border points, there is little the district would do to effectively combat illegal forest activities.

With the presence of the ungazzated border points, the smugglers free enter and exit the Rakai into Tanzania and other unknown destination.

However, environmentalists point out that enforcing regular police patrols around the forest reserves, empowering village groups to combat tree cutting, fighting corruption and tough laws against smugglers may help in combating tree cutting.