The statue is being taken through the 65 parishes that make up Kampala Archdiocese.

The statue is being taken through the 65 parishes that make up Kampala Archdiocese.

PIC: Christians of Bugonga Parish in Entebbe carried the statue of Virgin Mary from Entebbe Town to Bugonga on Saturday. (Credit: Juliet Lukwago)

ENTEBBE - Business activity was brought to a standstill as the Statue of the Blessed Virgin Mary was carried through Entebbe town on Saturday.

The statue is being taken through the 65 parishes that make up Kampala Archdiocese. This is during preparations to mark the archdiocese's 50-year anniversary.

The commemorative event will be held on October 29 later this year. 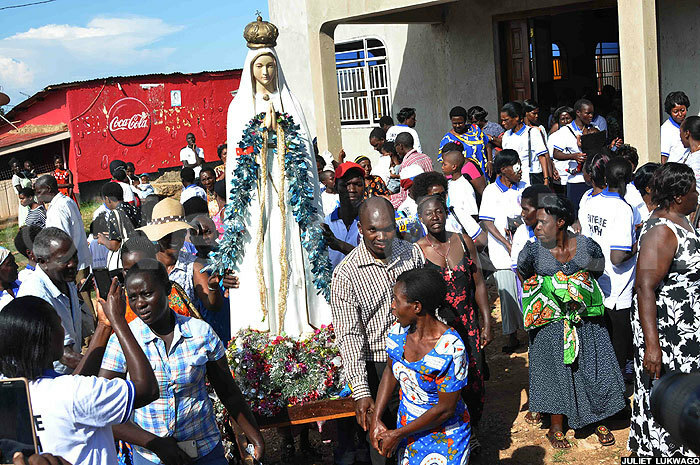 Fr Joseph Ssebayigga, who is the vice pastoral coordinator of the archdiocese, said they were taking the statue around because when the first missionaries arrived on Ugandan soil, they dedicated the country to the Virgin Mary.

He said that Catholics do not adore images or pictures but instead use them as symbols to help deliver a message to the faithful.

Ssebayigga also serves as the vicar of Entebbe Vicariate on top of being the parish priest of Bugonga Parish, Entebbe Municipality in Wakiso district.

A huge crowd cheered along as the statue was moved from St Anthony sub-parish to Bugonga Parish in Entebbe town. Both the young and the old sang hymns as they showed the statue and its bearers with flowers.

A youthful brass band led the lively procession as residents lined the streets to watch.

Kampala Archdiocese was established in August 1966 by the Holy See by joining what was known as Kampala Diocese and the then Archdiocese of Rubaga. 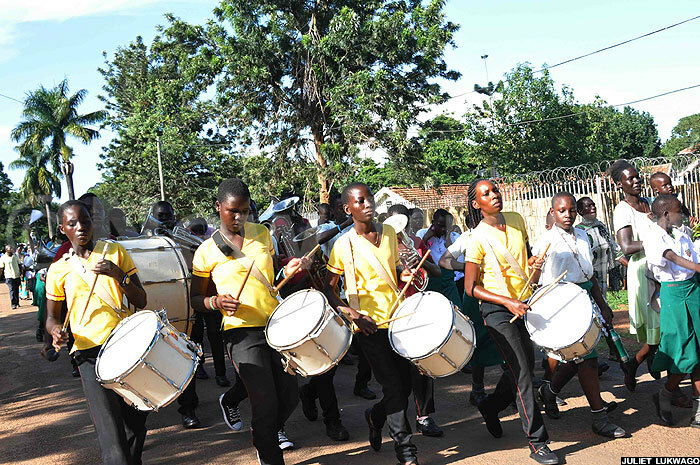 Preparations to mark its jubilee are in high gear, according to Fr Ssebayigga.

He said the statue started its journey on November 13, 2016 after Archbishop Dr Cyprian Kizito Lwanga handed it over to Vicar of Wakiso Fr Jude Makanga of Wakiso Vicariate where it covered over 14 parishes.

From Wakiso it was taken to Mitala-Maria Vicariate where it was handed over to Vicar Fr Denis Kizito Ssebunnya and it covered 12 parishes. After there, it was taken to Entebbe where it arrived on Saturday, scheduled to visit six sub-parishes that form Bugonga parish.

It is slated to stay in Bugonga until Friday before it is taken to Padre Pio Parish and other parishes. The statue is expected to conclude its journey in September 2017 at the peak of the preparation of grand event.