Arrests made after thugs rob, rape residents in Masaka

Locals say the armed thugs threw around papers bearing warnings that they would attack Kyabakuza and Kijjabwemi.

Locals say the armed thugs threw around papers bearing warnings that they would attack Kyabakuza and Kijjabwemi.

The incident came only days after President Yoweri Museveni had ordered police to take action against the culprits.

Museveni had instructed the Police in Masaka region to team up with the locals to stage road blocks, intensify patrols and desist from interfering with scenes of crime as an effective counter-strategy.

The latest incident took place at Kyabakuza Trading Centre in Masaka Municipality at around 4.00am local time in the middle of a downpour.

The two suspects held in connection with the incident have had their names withheld on police request.

Masaka deputy RDC Joseph Ssekasamba and a police team had earlier on the day of the latest attack held a security meeting to address land-related conflicts.

Southern regional police commander Latif Zaake, together with the UPDF Armored Brigade officers had held a similar meeting in neighboring Kingo sub-county in Lwengo district where it was resolved to suspend night prayers and restrict bar operations to 10pm local time.

Locals told New Vision the armed thugs had thrown around papers bearing warnings that they would attack Kyabakuza and Kijjabwemi on March 30 and 31.

As many as six victims were in the aftermath rushed to Masaka Regional Referral Hospital in critical condition. They are Maninsuli Kizito, Malik Ntale, Saidat Namugema, Jastine Namaganda, Dorothy Najjemba and a 19-year-old school girl who was reportedly gang rapped by the attackers. Attending to the victims

Winiefred Awuna, a senior clinical officer attached to the hospital emergency ward, told New Vision that the night shift medical team worked tirelessly to save the lives of the victims.

"We tested the victims and found them negative and enrolled them on PEP to prevent HIV infection, especially those who were raped. The thugs used the same blood stained weapons on the victims which can spread HIV."

She said the victims are responding quickly to the treatment except Kizito who suffered heavy bleeding in the chest with multiple cuts.

Locals told New Vision that Kizito had vowed to fight the thugs if they tried to attack his home. They said he had mobilized the residents to defend themselves against the criminals. During the attack, he reportedly put up a spirited fight against the attackers during which he sustained severe injuries.

The thugs cut off his wife's ear. Saidat Namugema had joined in on the early-morning fight.

The teenage girl who was raped said four thugs had demanded money from her mother before they descended on her. "I lost consciousness after the thugs rapped me in turns."

She said the thugs who were altogether about 10 forced their door open using an axe.  She said that as some were busy making away with property, others gang-raped her as the heavy rain outside muffled her desperate alarm for help.

She said the thugs said they had made an earlier survey for homes which have money. 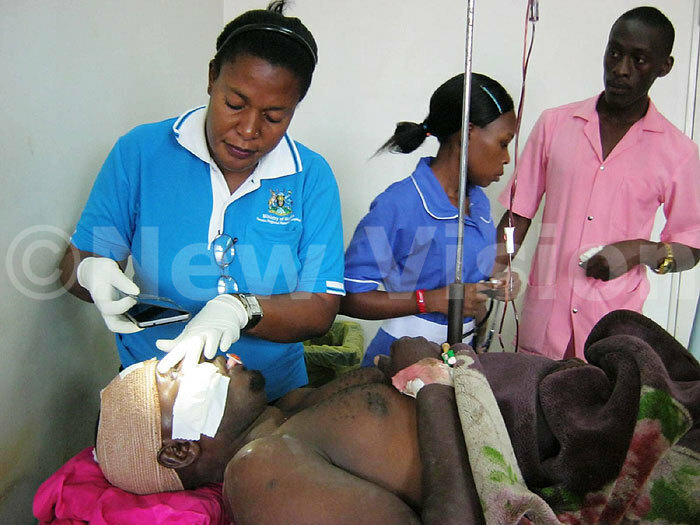 "We did not sleep at all the whole night. We combed all the areas but to our surprise shortly after, I had reached the Masaka Central Police Station, I received a call from the OC [officer-in-charge] of Kyabakuza police that the thugs had attacked the area," said Mwaule.

Last month, police arrested close to 200 criminal gangsters in connection to the murder of 20 people and injury of 80 others in Greater Masaka region.

The Southern Regional Police Commander Zaake told New Vision that the suspects were arrested in joint operations conducted by the police and the UPDF since January.

After a two-month break, the thugs armed with machetes and clubs on Tuesday made a fresh raid on four villages in Kingo sub-county, Lwengo district injuring a total of eight residents.

Fred Sserugo died while being rushed to Nsambya Hospital while the other identified as Ssentongo died at Kitovu Hospital in Masaka.

Zaake said the thugs took advantage of the slain AIGP Andrew Kaweesi's burial in Lwengo to resume their missions.

"The burial had occupied the majority of security personnel in Lwengo and the thugs took advantage otherwise we had contained the situation in the last two months using the village security strategy," he said.

The thugs raided the villages in Lwengo on the night when Kaweesi was buried in the district. They attacked Kyaluwubu, Nakatooke, Kamenyamiggo and Kingo. They reportedly tricked the residents by raising alarms, creating the impression that they needed help at the targeted homes.

"Whoever opened the door to respond to the alarm fell victim. However the thugs did not take anything," one Costa Ndagire said.

A community loud speaker which made an attempt to alert the residents about the invasion was vandalized by the thugs. The most affected districts included Bukomansimbi, Lwengo, Masaka, Rakai and Mateete subcounty in Ssembabule district. 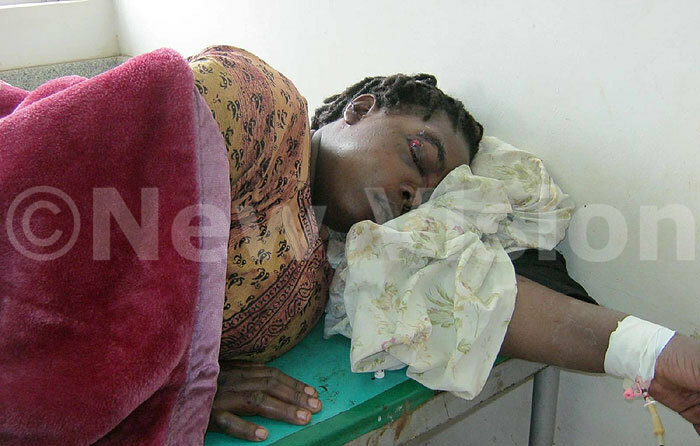 "We registered success in our joint Nyendo operation. Nyendo is a hub where the thugs terrorizing the region hatch their missions," he said.

In Nyendo, the operation recovered at least 15 stolen boda-boda motorcycles.

According to Zaake, the suspects have networks in Gomba district who swap the stolen motorcycles with their dealers in Nyendo.  The joint operation netted commanders of the robbery operations in area.

"Nyendo has finally enjoyed relative peace after the operation. The tendencY of releasing habitual criminals on police bond and court bail has been sorted, we have the majority of the habitual criminals behind the insecurity on remand in Masaka prison," he said.

Stores where stolen properties are kept were unearthed in Nyendo. As many as 20 culprits were arrested in criminal action in the area.

The gangsters started their missions in Bukomansimbi district where they targeted residents who had sold land, coffee, maize among others. Bukomasimbi is one of the largest coffee farming and trading areas.

Zaake said when he took over from the former regional police commancer Maxwell Ogwal in January, he pitched camp in Bukomansimbi to address the rampant incidents of machete-wielding gangs terrorizing residents there.

"I rushed to Bukomansimbi when I took over office as RPC in January. I wanted to understand the patterns, organization, structures and the ring leaders of these thugs."

About four people had been killed during the robberies in various villages in Bukomansimbi.   Zaake said the thugs have networks in almost every village trading centre, coffee processing factories and financial institutions who tip them on victims who have made financial transactions.

"These are not rebels, they are thugs scheming for money from the victims through their networks spread in strategic areas like coffee processing factories." Some of the boda-boda operators who transport the coffee traders at the processing factories are part of the crime network.

"That is how the thugs call you by name when they attack your homes. They tell you to bring the money from the sales you made in coffee or land," said Zaake.

The police empowered the communities by setting up village intelligence committees, patrols and crime preventers who report to the police stations and LCs.

The village security teams registered residents in their respective areas.   Intelligence security teams also have developed lists of suspected criminals and their collaborators.  Zaake said the police leadership in Bukomansimbi was overhauled as administrative steps to address insecurity in the district.

He said some of the police officers were suspended, transferred while others are facing disciplinary actions. The Police Standards Unit (PSU) is still handling staff from Bukomansimbi for failing the duties.

It is understood the police managed to contain incidents of thuggery in Bukomansimbi district through intensifying community policing where stakeholders teamed up collectively.

Police have identified Kalungu district as a pilot area model where toll free lines will be distributed to the 281 village security committees in the districts. Zaake said the pilot system will be rolled out countrywide as a measure to strengthen the security systems in the communities.

The village security committee will be equipped with motorcycles, bicycles and mobile phones.

"All that is required of them is to have their phones charged, they will make toll free calls on matters of security. It will help in effective patrols with police in controlling crime at the grassroots."

Zaake said 30 youthful people have been enrolled in the system per village and these will team up with crime preventers and the police.   Every 10 households will have village security personnel to take charge.

At least 10 suspects have been arrested in Lwengo in connection with the series of thug raids on over 30 homes in the past six months. The thugs injured 25, inflicting deep cuts on the victims in the district.  The most affected sub-counties include Kingo and Kisekka in Bukoto South Constituency in Lwengo district.

The thugs set blaze a motorcycle of one of the victims and robbed properties.

The area MP Hajji Muyanja Mbabaali has constructed three police stations in the area to beef up security. The police stations were opened up at Kingo, Kasswa, Ddongwa and Karegelo in Kisekka sub-county where the Police boss Gen Kale Kayihura officiated to commission the facilities.

Zaake told New Vision that the police budget is not enough to open up police posts in many affected areas, adding that countering the incidents of crime can be effective by empowering the locals and communities through village security teams and crime preventers.

"The crime rate is being supported by your own sons in the villages who act as informers of the thugs, let's open up and deal with them without favor," he said.

On his part, Mbabaali said the thugs target women saving groups in the constituency because they keep the money in the houses.   "Let's learn to keep money in banks. I set up a microfinance institution at Kinoni for the locals to save money. The habit of keeping money in houses must stop," he said.

The legislator said he has so far injected over sh500m in the women groups in Lwengo district, adding that the thugs are targeting the money that has multiplied.

Meanwhile, Lwengo district RDC Harriet Nakamya said locals should focus on food security in their homes and urged them to embrace the Operation Wealth Creation projects to improve their incomes and food security.

She said the district security committee resolved that bars must open between 4pm and 10pm as a security measure, adding that village patrols have been intensified.