The report warns that the food insecurity crisis is set to worsen this year with four parts of the developing world at risk of famine.

The report warns that the food insecurity crisis is set to worsen this year with four parts of the developing world at risk of famine.

PIC: A malnourished child is fed a special formula by her mother at a regional hospital  in Baidoa town, the capital of Bay region of south-western Somalia where severe cases of malnourishment and cholera are reffered by a UNICEF- funded health programme for children and adults displaced by drought. (AFP)

Record prices, conflicts and extreme weather combined to drive the number of people vulnerable to starvation up to 108 million last year, according to a new UN and EU-backed report.

The global total of people deemed "severely food insecure" represents a 35 percent increase on the 80 million considered to be in that dangerously exposed position in 2015.

The term refers to people already suffering from acute malnutrition or lacking enough food to provide their basic energy requirements on a sustainable basis.

It can include households who can only survive by, for example, slaughtering their animals and thus depleting their future ability to produce food.

The report warns that the food insecurity crisis is set to worsen this year with four parts of the developing world, South Sudan, Somalia, Yemen and northeast Nigeria, at risk of famine.

The report was produced under the joint auspices of the European Union, UN agencies including the Food and Agriculture Organisation (FAO) and USAID/FEWSNET along with some regional food security institutions. 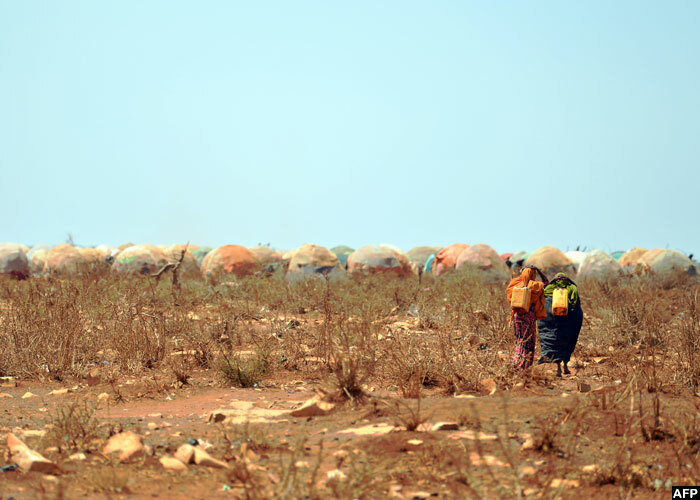 Women carrying jerrycans of water from a collection point set up by a UN aid agency walk towards a makeshift camp on the outskirts of Baidoa, in the southwestern Bay region of Somalia

But civil conflict was the driving factor in nine of the 10 worst humanitarian crises, the 2017 Global Report on Food Crises says.

Other countries facing widespread food insecurity this year are Iraq, Syria (including refugees in neighbouring countries) Malawi and Zimbabwe.

"In the absence of immediate and substantive action not only to save people's lives, but also to pull them back from the brink of famine, the food security situation in these countries will continue to worsen in coming months," the report says.

FAO Director-General Jose Graziano da Silva said: "We can prevent people dying from famine but if we do not scale up our efforts to save, protect and invest in rural livelihoods, tens of millions will remain severely food insecure."

"It is a race against time -- the world must act now to save the lives and livelihoods of the millions at the brink of starvation."

Queens of the red carpet

The pleasant surprise of a perfect wedding