This year’s proceeds will go towards fighting sickle cell disease

This year’s proceeds will go towards fighting sickle cell disease

Uganda Sickle Cell Rescue Foundation has urged Ugandans to take medical tests and establish whether they have sickle cell disease so that they can be able to know how to manage it and where to start treatment.

Erostus Nsubuga an official of AGT laboratories which is a partner member of the foundation made the appeal on Thursday at a function held at Hotel Africana where they handed over the sh12m to this year's Kabaka Birthday Run.

"We appeal to all Ugandans to take sickle cell tests and most especially when getting married. Partners should test first because this will help both of you make better decisions," Nsubuga stated.

"When you know that you have sickle cells it helps you manage the disease by getting the treatment," Nsubuga added.

Hotel Africana managing director, Ibrahim Kibirige, added that they have joined the cause to help create awareness about the disease that is killing people silently.

"People don't know this disease and if they know they don't know where to get treatment and that is why we as Uganda Sickle Cells Rescue Foundation have joined this cause," Nsubuga said. 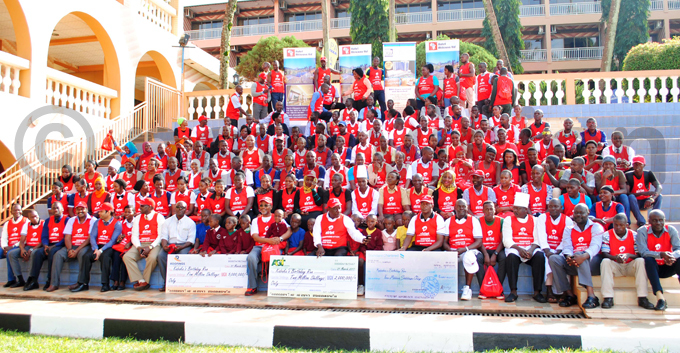 Kabushenga also received the ambulance from Zephaniah Sseninde to join the other ambulances that were offered to provide medical services on the day.

Tickets for the run go for only sh10,000 and can be got at Vision Group offices, Airtel head offices along Wampewo Avenue, PostBank branches in Ndeeba, Jinja Road, Kikuubo and Nkrumah Road branches.

Ivan Semwanga ducks his mother while in Kampala