The Baton is due to depart for Cameroon on Wednesday morning

The Baton is due to depart for Cameroon on Wednesday morning

Uganda's have embraced the Commonwealth Queens Baton that arrived in the country on Saturday.

The Baton will be traversing across the globe in a traditional relay as a precursor for the forthcoming Commonwealth Games due in Australia next year from 4th-15th April.

The Baton begun its journey on 13th March at Buckingham Palace when Queen Elizabeth II placed her message into the Baton to entrust it's journey with the many bearers around the Commonwealth.

According to organizers, the Baton will this time achieve two records where it will be the longest relay in the history of the games and the most accessible relay ever.

It will be traveling for 388 days throughout all nations and territories where it will spend between two and four days in each territory taking time to embrace every community it visits across Africa, America, Caribbean, Europe, Asia and Oceania.

The Baton will cover a distance of 230,000km and arrived in Uganda through Rwanda where it will proceed to Cameroon, Nigeria, Kenya, Tanzania, Seychelles, Mauritius, Malawi, Zambia, Namibia, Botswana, Mozambique, Swaziland, Lesotho, and South Africa before heading to St. Helena in the Atlantic. 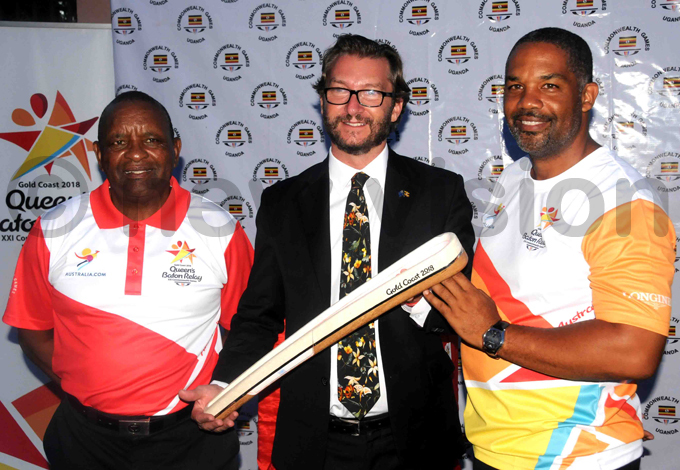 Acting High Commissioner of Australia to Uganda, Jeremy Green, called on a high competition spirit at the games drawing comparisons to Uganda runner Joshua Cheptgei who despite running out of steam managed to cross the finishing line at the World Cross Country Championships at Kololo on Sunday.

"Uganda is lucky because there are already many fans in Australia. The good performance of the She Cranes team in the World Netball Cup captured many fans for Uganda," Green said.

The Baton relay was held at the Gems International School in Butabika on Sunday and was the sporting fraternity viewed it at the UOC head offices in Lugogo on Monday.

The Baton is due to depart for Cameroon on Wednesday morning.