Jacob Kiplimo wins the first ever gold for Uganda at the World Cross Country Championships.

Jacob Kiplimo wins the first ever gold for Uganda at the World Cross Country Championships.

KAMPALA - Jacob Kiplimo, 16, became the first Ugandan to win a gold medal at the World Cross Country Championships when he put up a great performance on home soil on Sunday.

The teenage athlete sent the ubiquitous home crowd into wild celebrations at the end of the U20 men's race when he broke the finish line with a time of 22.40 minutes to secure gold at Kololo. 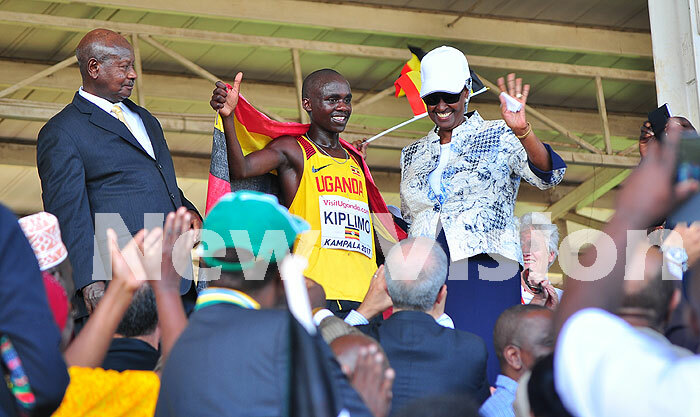 The race started of with runners from, as usual, Kenya, Ethiopia, Uganda and Eritrea in the lead pack as the crowds cheered the group on.

Yemane Haileselassie of Eritrea led the runners through the first lap under sweltering temperatures and hot on his heels were Kenyan runners plus Solomon Berihu of Ethiopia.

Along the course, world U20 steeplechase Amos Kirui of Kenya squeezed into the lead with Uganda's Kiplimo making his way into second to send the crowd into wild cheers.

As the race wore on, Kiplimo, a world U20 10,000m bronze medallist, opened up some good gulf along with Kenya's Kirui.

It transformed into a four-man race at the front after Berihu and Kenyan Cross Country U20 champion Richard Kimunyan catching up with Kiplimo and Kirui.

Kiplimo, willed on ever by the ever buouyant home crowd, broke away from the rest. And that lead stretched further and further as the youngster felt the ripples of encourangement from the crowd.

Eventually he broke the finish line to send the huge home crowd into celebrations.