World Cross Country: The stars to watch
Next Story 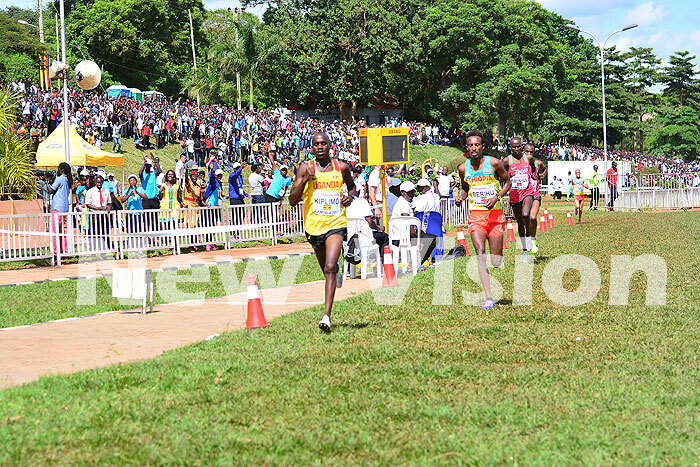 Reporting by Joseph Kizza at Kololo

Initially, Uganda's Stephen Kissa rubbed shoulders with the likes of Vincent Rono of Kenya and USA's Stanely Kebenei in the leading group early into the race.

Cheptegei, a cross country champion, breezed into the lead mid-way through the race. It turned into a two-man affair at the very front as cheptegei gave title-holder Kamworor a run for his money.

Ethiopia's Bonsa Dida was a distant third at this point.

The home crowd was given more than a reason to turn up their volume as Cheptegei broke further away from Kamworor, with three kilometers left to run.

Then came the final lap. The disastrous final lap for the Ugandan! First, he appeared he was going for it, before a resolute Kamworor  overtook him.

Tables turned suddenly as Uganda's second gold hopeful tired ever and ever. His legs gave way and became rubbery, surrendering what should have been a historic achievement for him.

One, two, and three. Kenya takes it all here. In fact, it's Kenya's first ever clean sweep in the women's senior race.

In fact, besides taking all the medals, Kenya took the fourth, fifth and sixth positions. Historic!

In this race, as many as 104 athletes took to the starting point to do a five-lap race.

As per the script, the top three favorite nations had bagged gold. Kenya took the mixed relay, Ethiopia the U20 women and hosts Uganda, a first ever, in the U20 men.

Coming into this one, Kenya had won the previous five titles, with defending champion Agnes Tirop also taking part today.

The lead pack was quite huge, with about 25 or so athletes breathing behind each other's necks. Lornah Kiplagat, who won the senior women's race a decade ago on home soil (Mombasa), also featured today.

The lead pack had narrowed considerably towards the conclusion of the eight-kilometre run, with an Ethiopian sticking with the group in front.

All but two of the entire Kenyan team were in the lead. Defending champion Tirop found herself left behind as the end approached.
Kipyegon also lagged and when the bell was struck, three runners were going for gold (Nawawuna, Cheptai and Rengeruk).

Behind in fourth, Kipyegon allowed Jepkemoi to race past her while title-holder Tirop struggled two places further behind.

Cheptai peeled away further from fellow Kenyan Rengeruk before going for gold.

With the home crowd, Team Uganda and wellwishers still in celebration, all focus was on Kiplimo.

It was such a historic moment for him that he was invited up the stairs  to where President Museveni and First Lady Janet sat and took photos with them.

What an achievement for the young runner, and more importantly, on home soil!

Jacob Kiplimo has won Uganda's first gold medal at the 2017 World Cross Country Championships, crossing the line with a time of 22.40 minutes in the U20 men race.

In fact, it is Uganda's first ever gold medal in World Cross Country history. 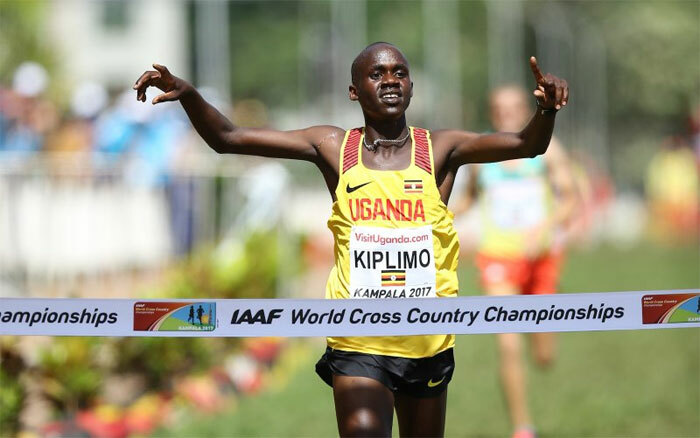 We started off here with racers from, as usual, Kenya, Ethiopia, Uganda and Eritrea in the lead pack as the crowds cheered the runners on.

Yemane Haileselassie of Eritrea led the runners through the first lap under sweltering temperatures and hot on his heels were Kenyan runners plus Solomon Berihu of Ethiopia.

Along the course, world U20 steeplechase Amos Kirui of Kenya squeezed into the lead with Uganda's Jacob Kiplimo making his way into second to send the crowds into wild cheers.

As the race wore on, the Uganda, a world U20 10,000m bronze medallist, opened up some good gulf along Kenya's Kirui.

It transformed into a four-man race at the front after Berihu and Kenyan Cross Country U20 champion Richard Kimunyan catching up with Kiplimo and Kirui.

Uganda's Kiplimo willed on ever by the buoyant home crowd, broke away from the rest. And that lead stretched further and further as the youngster felt the ripples of encourangement from the crowd.

Eventually he broke the finish line to send huge home crowd in celebrations.

So for, Kenya has gold, Ethiopia does too. Who will get this next one? We will know after eight kilometres of running (four laps around the Kololo course)

Defending champion Letesenbet Gidey of Ethiopia has won gold in the U20 women race in Kampala with a time of 18.34 minutes.

The racers had three laps of the Kololo course to do, which is about six kilometres.

Gidey, set on retaining her World title and a pre-race favorite, started strong in the lead pack. And perhaps on the back of her mind were fond memories of Ethiopia's dominant show in the last championships in Guyang (China) where they enjoyed a clean sweep of the medals in this particular race.

But as the race progressed, Hellen Lobun and Celliphine Chespol of Kenya peeled away from the rest. But not without Gidey.

Eventually, it turned into a three-strong race at the front, with the Kenyans finding difficulty peeling away further from the title-holder.

The Ethiopian crowd rose to its feet as Gidey made for the finish line to defend her title convincingly.

It's tight at the front, with Kenya and Ethiopia in stiff competition.

2.24pm: The Kenyan team have won the mixed relay final, the first race of the day, with a total time of 22.22 minutes. In second came Team Ethiopia and in third was Team Turkey. 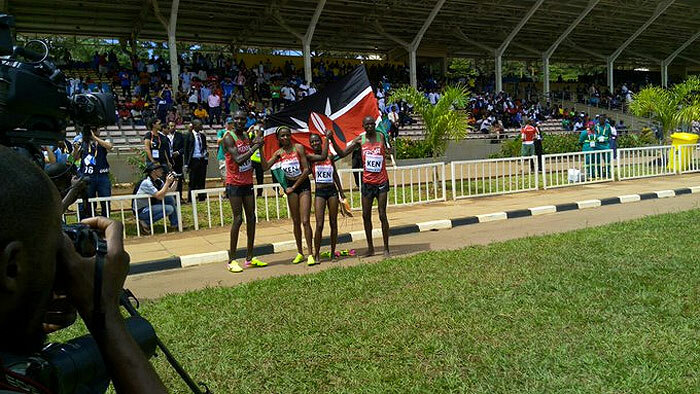 Kenya's Asbel Kiprop, the 2007 World U20 Cross Country champion, led from the start and he kept up the pace ahead of Ethiopia's Welde Tufa on a hot Sunday afternoon.

The Kenyans willed on their own as Kiprop showed great strength and consistency to give his team a sizeable head-start.

Winfried Nzisa Mbithe carried on for the Kenyans as the crowds burst into life. Ethiopia was a close second while Turkey battled on in third.

At some point, Turkey's Meryem Akdag was hot-on-the-heels of Ethiopia's Bone Cheluke.

At the second changeover, Team Kenya had built a wealthy 15 seconds over Ethiopia and 18 over pursuing Turkey. 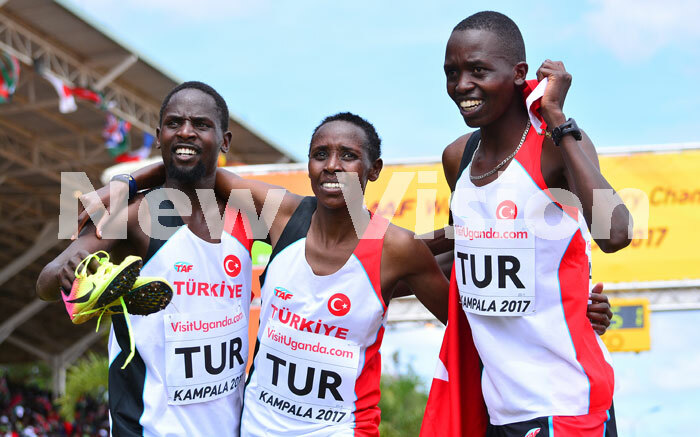 Hosts Uganda and Bahrain were still in it. Bernard Koros of Kenya took it on for the Kenyans as Yomif Kejelcha of Ethiopia was close behind.

Koros eventually handed over to Beatrice Chepkoech who had to face some formidable competition in the form of Genzebe Dibaba.

Dibaba did manage to close in on the Kenyan, but Chepkoech kept up and crossed the finish line to secure Kenya's gold in the maiden Mixed relay race.

On a warm Sunday afternoon, the president had arrived to a huge applause from the crowd accompanied by his wife Janet. 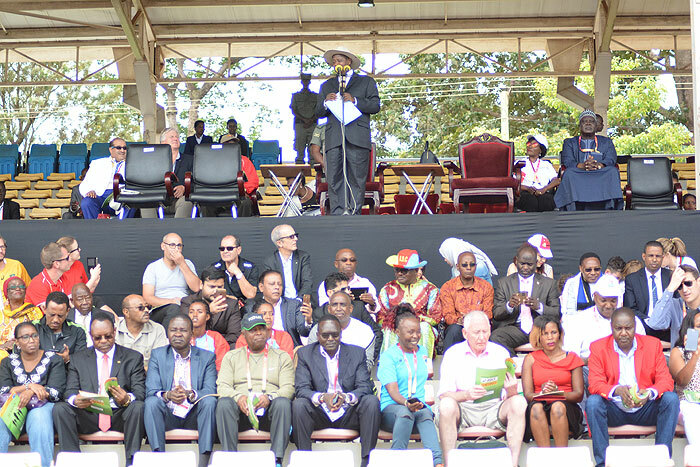 Several high-profile people, including IAAF president Sebastian Coe, are at Kololo to watch teams from 59 nations across the world compete in the afternoon races.

As many 557 athletes are competing today.

Both foreign and local media are at the venue for this high-profile sporting event, hosted by Uganda for the very first time.

As soon as President Museveni and his wife were led to where they would be sitting, the national anthem was sung.

Thereafter, the 59 participating nations were introduced before the large crowd while their respective flags displayed.

Ethiopia, another country known to produce some of the finest long-distance runners in the world, also has huge representation.

In her brief address, education and sports minister Janet Museveni welcomed everyone to the event, which Uganda is hosting as only the fourth African nation to do so.

Morocco, South Africa and neighbours Kenya are the other countries to  have hosted the event.

The mixed relay race will be the first for the afternoon.