How much prize money is at stake today?
Next Story

Joshua Cheptegei: The 2014 World 10000m junior champion has never been in better form.

Joshua Cheptegei: The 2014 World 10000m junior champion has never been in better form.

As the world athletes descend at Kololo Ceremonial Grounds today for the prestigious IAAF World Cross Country Championship, Sunday Vision writer James Bakama looks at the top ten stars to look out for.

He is the defending champion of the senior men's event. Kamworor leads Kenya's raid of Kampala with a mission of becoming the first man to win back-to-back titles since Kenenisa Bekele's 2002 to 2006 reign.

His record has however lately lacked a sparkle last won at the world half marathon exactly a year ago.

But he isn't shaken ahead of his defence on Sunday. Cross country is his strength. He has also consistently proved in this event that he can raise his game when it matters.

The 2014 World 10000m junior champion has never been in better form. In January he easily cruised to Uganda's national cross country title at the same venue where this year's world meet will be.

He has for over a month further progressed prompting his coaches to place him amongst the favourites. "Don't be surprised if Cheptegei becomes the first Ugandan ever to win gold," said Global Sports Communication coach William Cheptoek.

Even the biggest names have been noncommittal when asked about their medal prospects. World 10000 meter junior champion Jacob Kiplimo (top) is however different. "I am going for gold," the 16 year old has consistently stated.

"He is a special talent," notes national coach Benjamin Longiros. Kiplimo has showed exactly that in training opting to measure himself against the seniors where he has also proved a force. At the national championship he won by a huge gap. 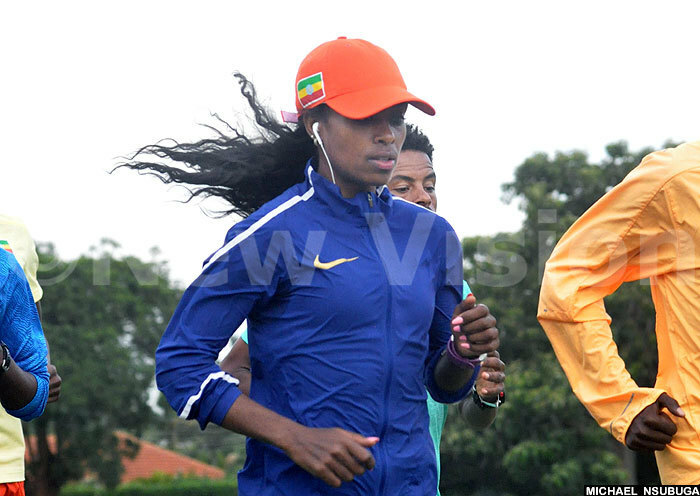 The multiple medal winning Genzebe continues with the Dibaba (top) legacy. She is the sister of three-time Olympic champion Tirunesh Dibaba and Olympic silver medallist Ejegayehu Dibaba, and the cousin of former Olympic champion Derartu Tulu.

Edris shoulders the unenviable task of shoving off the Kenyans. The 2015 bronze medalist was Ethiopia's top finisher in the senior men's event.

Kenya has won three of the last five races of the blue ribbon event of the biennial competition.

Like Kiplimo, Uganda's U-20 women's champion, has also been very impressive in the build-up to Sunday. She is however reserved when asked about her prospects. "Only God knows how I will fare," she says however stating that she is set for battle.

He leads a strong US team that he dominates with fellow Kenyan born runners Shadrack Kipchirchir, Sam Chelanga and Stanley Kebenei. The quartet has warned that they are set to roll to a 1-2-3-4 finish just like at the USA Cross country championships. Korir has been enjoying good form that has in recent weeks had him training in the Kenya highlands.

She is out to equal her sister Tirunesh's record. Tirunesh in 2005 and 2006 was the last woman to win back to back titles.

She is one of those figures Uganda's Chemutai will look out for. She led a 1-2-3 Ethiopia sweep at the last edition in Ethiopia.

The two time Ugandan champion shot into the headlines when he beat Uganda's most successful cross country figure-Moses Kipsiro in 2015. Kipyeko, who was then running his first race as a senior, repeated the victory the following year. He was second this year before also getting silver at the Africa cross country last year.

Tirop leads Kenya's women team with the task of defending the title she won in Beijing. She is also bidding to become first back-to-back female champion since Tirunesh Dibaba. At the 2015 event, she became the second-youngest ever gold medalist in the women's race after Zola Budd.

Mali coup leader who stood aside now wants power back