NOTU secretary general Christopher Werikhe (R) was animated in his exchange with MPs on the finance committee. Looking on is Wilson Owere. Photo by Kennedy Oryema

National Organization of Trade Unions (NOTU) leaders caused a storm in Parliament by engaging in verbal exchanges with MPs on the finance committee including forcing one of them to withdraw his statement which they perceived as an insult.

In a delegation of 22 members, the NOTU leaders were today appearing before the committee to give their views on the Retirement Benefits Bill.

It kicked off with NOTU secretary general Peter Werikhe raising concern that there are four versions of the Bill the Ministry of Finance drafted and wondered on which one the committee wanted their views.

The committee chairman Henry Musasizi clarified to them that although the ministry has had various versions of the Bill over the years, the committee is handling the one that was sent to them.

The manner of presentation exhibited by the group prompted Kioga MP Anthony Okello to say the group was disorganized.

Okello's comment angered the workers' leaders who raised their voices in protest against the MP.

"Don't abuse us. Have I abused anyone? My interest is workers. I did not come from Owino to be called disorganized. If you cannot respect us, we can leave your committee," Werikhe shouted in a manner that created tension. 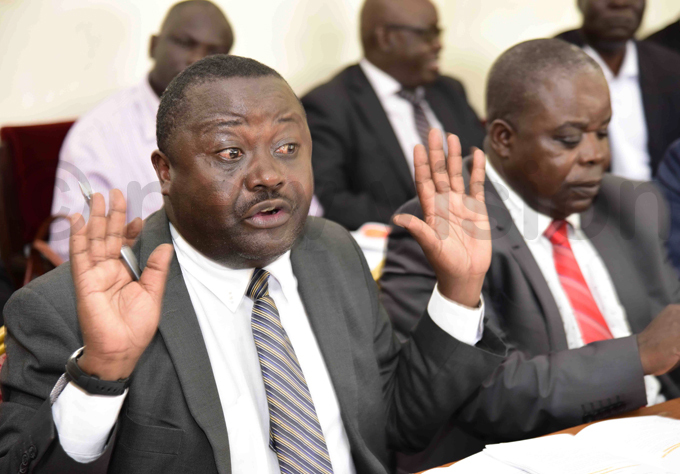 NOTU chairman Wilson Owere and other members of the delegation equally expressed dismay that the MP had insulted them and asked him to withdraw his statement.

Troubled by the responses from the workers' leaders who had amplified their voices to vent their anger, the Musasizi also raised his voice saying, "I don't like headache. You have come to appear before the committee of MPs. You have to accept our working methods and working norms."

Musasizi's statement was like adding insult to injury as the workers' leaders became more furious.

Were swiftly countered Musasizi's argument saying, "We have not come here to be abused."

Fighting back, a visibly angry Musasizi said, "By the way, none of us has been voted by you. We are not workers' MPs. I cannot accept to be intimidated."

Sensing that the situation was increasingly getting out of control, Okello apologized saying, "For purposes of this meeting going on, let me withdraw my statement. If my statement angered you, I kindly withdraw it."

Musasizi also apologized for Parliament sending NOTU various versions of the Bill but explained that it is the Ministry of Finance that has kept altering it.