Uganda beat Rwanda to qualify for 2017 Afr...
Next Story

KCCA FC had held the defending champions before letting Sundowns find the all-important equalizer late on.

KCCA FC had held the defending champions before letting Sundowns find the all-important equalizer late on.

KAMPALA - Defending champions Mamelodi Sundowns knocked KCCA FC out of the CAF Champions League, thanks to a late equalizer by Liberian Anthony Laffor on Saturday.

The hosts had led through Geoffrey Sserunkuuma 30 minutes into the game and with the match tied 2-2 on aggregate that far, but with KCCA favored to go through on the away-goals rule, the home side was high on belief.

But Pitso Mosimane's men were not ready for an embarrassing early exit and returned after the interval brighter and hungrier.

And after huffing and puffing for more than half an hour, they found the all-important leveler through subsitute Laffor in the 81st minute.

It was a huge ask for KCCA who, with tables now turned, needed to score again to stay in it. But their more illustrious opponents were in no mood of letting this one slip through their grasp and held on until Botswana referee Joshua Bondo's final whistle.

Not all is lost for coach Mike Mutebi's men. They are still in continental football contention: their exit in the Champions League at this stage takes them down to the CAF Confederation Cup, in which fellow Ugandan side Vipers SC were still featuring before eventually crashing out.

Vipers were leading 1-0 from the first leg played last week but a 3-1 return-leg defeat to Platinum Stars ended their journey.

Meanwhile, Mutebi will have been pleased with his side for being brave against the reigning champions, who had been favored to kill the tie off in the first leg last week, only to allow an away goal to sneak in.

Sserunkuuma was the scorer of that vital goal and the lanky KCCA attacker found the net once again on home soil to break the deadlock at the Philip Omondi Stadium to send the home crowd wild. 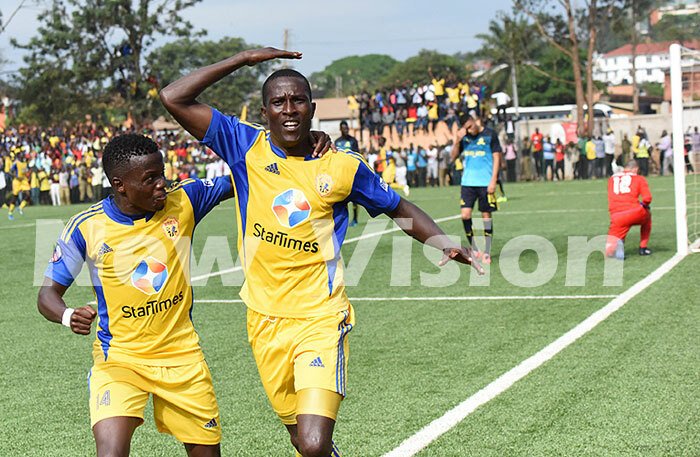 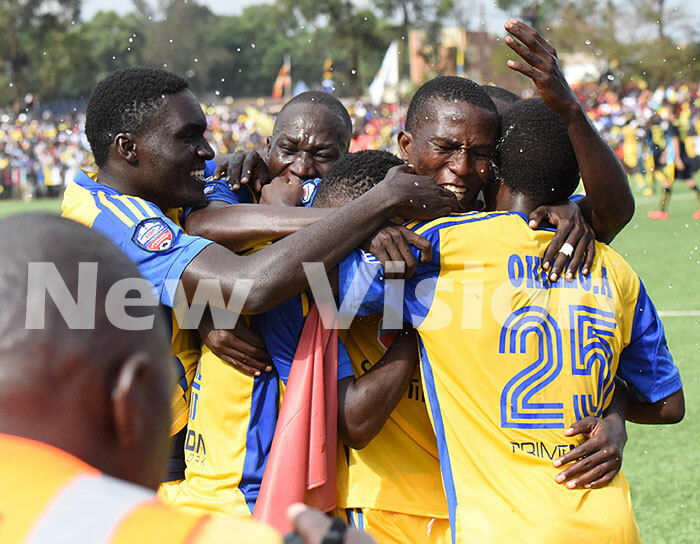 Sundowns had brought a 2-1 lead to Kampala but knew that a 0-0 result would take them through. The hosts, on the other hand, knew they had to at least score to stand a chance and a 1-0 result here would sail them to the group stages.

On top of knocking out the defending champions, the Lugogo-based outfit would be the first Ugandan side to make it that far into the comptetition.

And inspired by that prospect, they started off strong, with teenage sensation Allan Okello going close once fed in by Paul Mucureezi three minutes into the game.

Three minutes later, Joseph Ochaya, playing his last game for the Lugogo-based outfit before joining his new club Lusaka Dynamos of Zambia, nearly found the opener but his goal-bound shot was overcooked and whistled over the bar.

And his side's outing was not made any easier by the early departure of Wayne Arendse, who limped off in the 10th minute to give way for Soumahoro Bangaly.

Soon, the visitors were back in it, with Ivorian Yannick Zakri drawing Benjamin Ochan into a fine save. 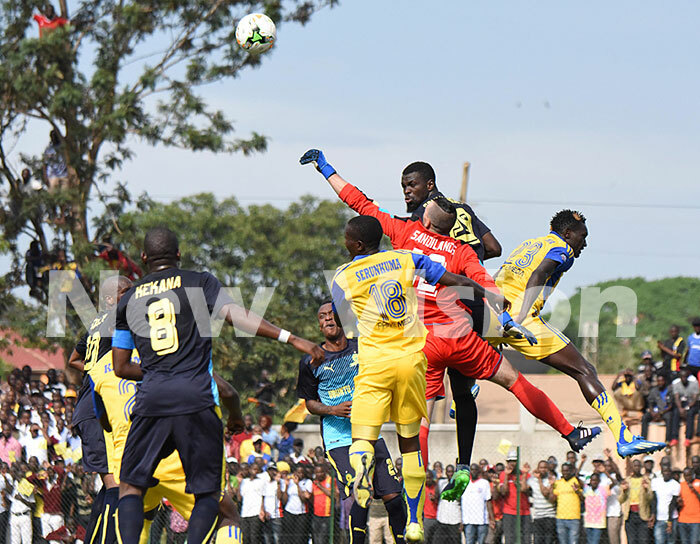 Both keepers were busy, Muzamiru Mutyaba's fine effort parried by Sandilands on one end and defensive midfielder Hlompho Kekana's 40-yard strike kept out by Ochan on the other end.

In an end-to-end affair, substitute Soumahoro, who scored the opener in the first leg, did the same towards the half-hour mark but his goal was disallowed for offside.

That was a wake-up call for KCCA to the danger the visitors posed. Habid Kavuma was the first man to go into referee Bondo's book for a foul on Tebogo Langerman, two minutes before Sserunkuuma struck home with a familiar tap-in to spark celebrations around the tight stadium.

Another home sub Paul Musumali, on for Mucureezi, showed plenty of industry as the home side hang on to their shoelace-thin advantage.

Fifteen minutes to time, goalie Ochan appeared to have picked up an injury after a clash but was able to pick himself up. His side needed to hold on just a little longer.

It wasn't to be, however, as Laffor struck with nine minutes of normal time left to play to stab the home fans.

It would have been a shocking exit for the South African side and so they will have the Liberian to thank for side-stepping that possibility. 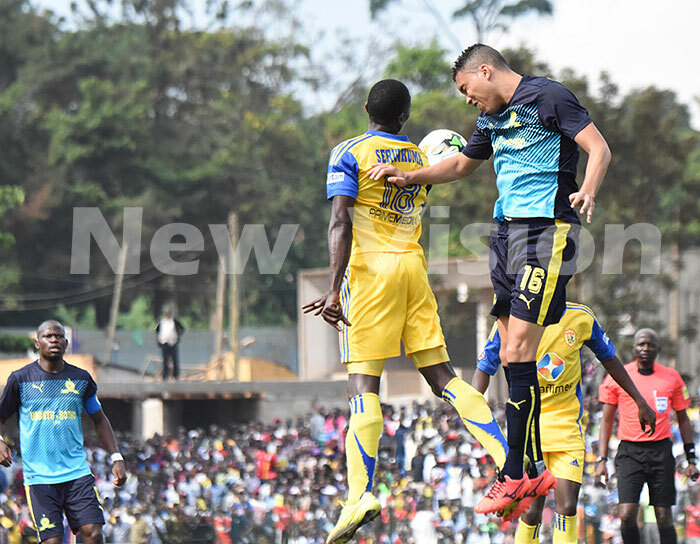 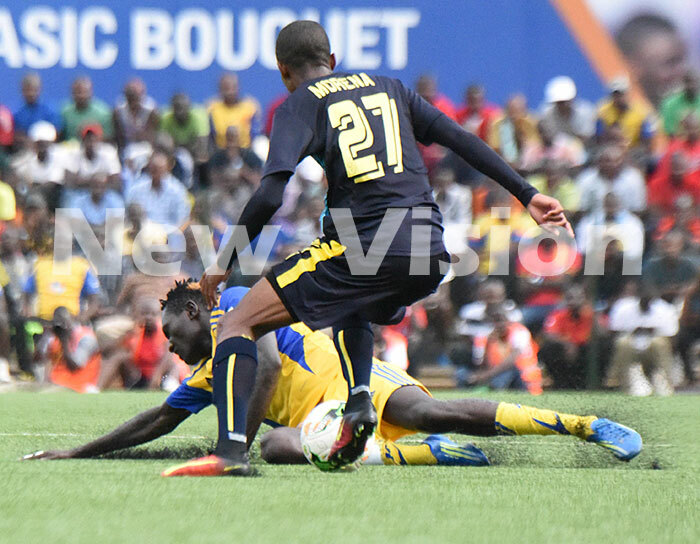 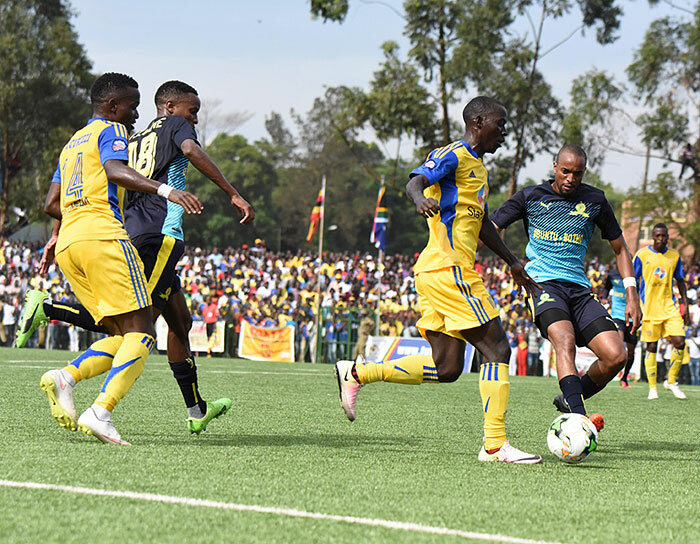