Toroma County MP Cyrus Amodoi is set to be laid to rest on Sunday at his ancestral home in Kanapa Village, Magoro Parish in Magoro Sub County.

According to the spokesman of Teso Parliamentary Group, David Abala, the body will on Friday be taken to Christ the King Church in Kampala for a requiem mass before the body is taken to Parliament for MPs to pay their respects.

"The body shall be airlifted from Kololo to Toroma County for a special council sitting before the burial on Sunday afternoon" Abala said.

Amodoi's death comes at a time the Teso region is recovering from the death of the former Soroti Municipality MP Charles Willy Ekemu and his father Philip Omaswa Ekemu who were buried on the same day.

He died in a tragic accident that claimed eleven other people along Jinja-Kampala Road on Tuesday night.

The Paramount Chief of Iteso cultural union, Emorimor Augustine Osuban Lemukol, described the legislator's death as a big loss to the people of Teso.

"We are saddened with the demise of our leader Amodoi.  I pray that God sustains the braved family during this trying moment" the Emorimor said.

Abala said Teso has lost a leader who was so passionate about people's security and their health. 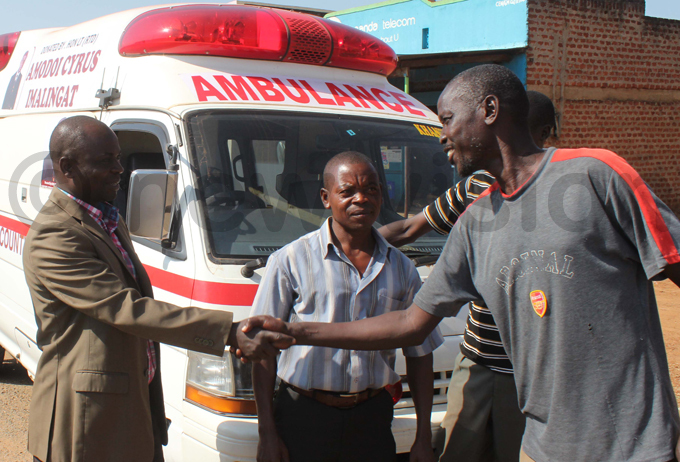 Amodoi handing over an ambulance he donated in 2015. Photo by Godfrey Ojore

"As a retired army officer he has been instrumental in advocating for peaceful co-existence of Itesots and Karamojongs. He also bought an ambulance for his people because he had them at heart" Abala said.

Back in Toroma County grief engulfed his electorate who could not believe the news of Amodoi's death.

"He was an approachable MP who loved socializing with the local people; it's a big loss to us and the entire Katawi district" said Francis Emongot the LC3 Magoro where the fallen MP hailed from.

His elder brother Bosco Icumale said that the MP was their last born in a family of eight and that there have been four surviving siblings.

"We are now three who are left after his tragic death in a motor accident. Amodoi was jolly and a hard working child that had much respect for us his elder brothers" Icumale said.

Margaret Ngangro one of the sisters told New Vision that Amodoi had been preparing to start building a home before his death.

"He has few children but he was taking care of all our late brothers' children whom he was educating. I don't know the fate of those children now" Ngangro said.

Amodoi was born on January 6th, 1976 in Magoro Sub County to Alfred Imalingat and Mary Isienge who are both deceased. He has died at the age of 41.

He got a Bachelor Degree in Education from Makerere University.

Role of stakeholders in forest management