Paul Kiirya (R) with his wife

There was drama at Kamuli Central Police Station (CPS) on Tuesday when brothers decided to swap wives in order to restore peace. The men, who hail from Butende-Bubanda village in Kamuli district, are now officially staying with their new catches in neighbouring houses on the same family land.

The drama started when Kiirya stormed Kamuli CPS to report his brother, Malinzi of having seduced his wife, together with his four children. "I want my wife back. We have been together for 32 years and have 11 children," Kiirya told the officer in charge of child and family protection, Richard Kagoda. "I shall not accept to lose her and my children."

The Police said it was Kiirya who was the first to snatch Malinzi's wife in December 2016. According to the LC1 Chairman, Dennis Mudyope, Malinzi had chased his wife, Proscovia Namugaya, 35, away from his home. 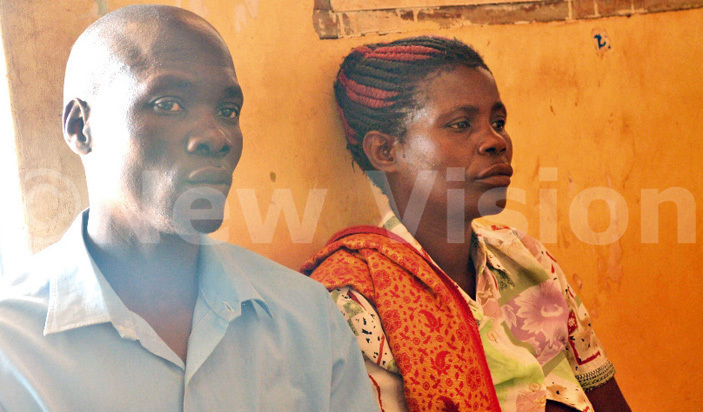 When Kiirya saw her leaving with luggage and two children, he sympathized with her and proposed that he rents for her a room as he negotiates reconciliation with his brother. He rented a room at Butende-Kulukone trading centre, next to his third wife before announcing that Namugaya had become his fourth wife. Kiirya already had three wives.

When Malinzi discovered the developments, he tried to woo her back in vain. Namugaya declared she would never return to Malinzi.

"That could have been the reason why Malinzi decided to seduce Kiirya's senior wife," Mudyope said.

In January, Malinzi seduced his big brother's wife, Katirini Nabirye and eventually brought her to his home. When Kiirya learnt about it, he stormed the police station for arbitration.

When asked about whether she wanted to return to Kiirya, Nabirye said she had reached her destination. "You people leave me. God has answered my prayers. 12 years of suffering in Kiirya's home was too much to endure," she said.

Nabirye added that Kiirya had become reckless, seducing women and renting for them homes. She would have left a long time ago had it not been for her fear of Kiirya.

"That man almost killed me when he found me picking his coffee to pay fees for our children," she said. Kiirya said he was so disappointed in his brother. "He grew up in my home. Even my wife used to bathe him. How on earth can she now be his wife? She must return my children," he said.

But Nabirye refused to return the children. So it was decided that Kiirya leaves the children with their mother, after all Malinzi is their uncle. Namugaya said Malinzi does not know what he wants.

"You cannot trample on gold and expect to lick it later. Big is big! He failed to handle me, let him settle for his level," she said.