Isaac Muyanja's 57th-minute only goal was enough to seal victory for the hosts.

Isaac Muyanja's 57th-minute only goal was enough to seal victory for the hosts.

A single goal in the second half was all that hosts Ndejje University needed to secure all three points and subject Maroons to their first defeat of the season in the FUFA Big League.

Maroons had gone into the game knowing a win would secure their promotion to the Azam Uganda Premier League as table leaders but the hosts had other plans.

Having settled for a goalless draw in a physically charged match at half time, Ndejje were to return in the second half much hungrier for a win.

Isaac Muyanja put the hosts ahead in the 57th minute and the solitary goal was enough to seal victory. 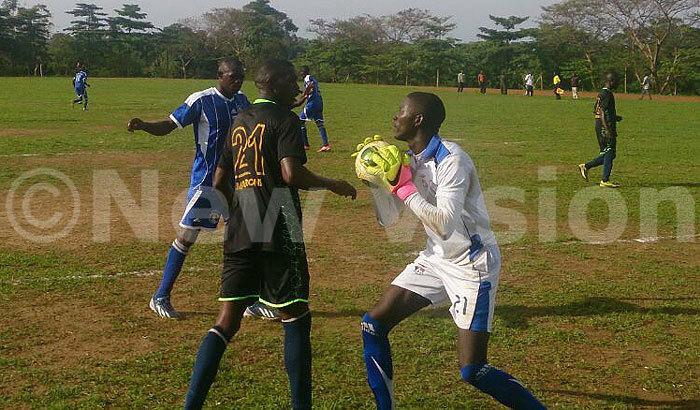 Maroons thereafter had numerous chances to level matters but failed to score, with the most open chance falling to youngster Pius Obuya who failed to find the back of the net with the keeper beaten.

Ndejje's coach had to be sent out of the pitch for unsporting behaviour, which he later attributed to the pressure of the game. But he said his side is very much still in contention to qualify for top flight football.

Maroons coach Asaph Mwebaze Jr said they had not expected defeat in the game.

His side will now have to win three of the four remaining games to be sure of retaining the top slot in the Elgon Group.

Despite losing, they still top their group and are eight points ahead of second-placed Ndejje.

But Ndejje with a game in hand could cut that lead to five points should they beat Simba FC in their next encounter.